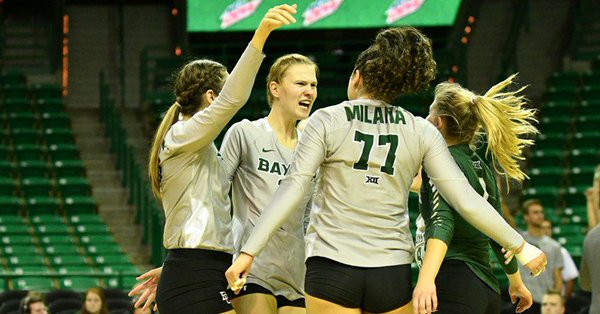 Facing tough road matches, both #24 Baylor and #6 Texas survived five set matches Saturday afternoon. The Bears overcame a two set deficit to beat West Virginia and the Longhorns outlasted the Sooners in Norman. Iowa State held serve on its home court with a sweep of TCU and Kansas won its ninth straight match to remain unbeaten in conference play.

Baylor stormed back from a two set deficit to stun West Virginia in five sets Saturday afternoon in Morgantown.

West Virginia came out of the gate on fire in the second set, as it took the first seven points and cruised all the way to a 25-13 win.

The Mountaineers looked poised to take the sweep as they led 21-19 in the third, but Baylor had one final push to try to extend the match. The Bears came through with a 6-1 run to claim the third, 25-22.

The fourth set was back and forth, but again Baylor closed strong with a 6-1 spurt to take the set, 25-20 and force a fifth set.

West Virginia earned a match point try at 15-14 in the fifth, but three straight scores by the Bears, including a final kill from Shelly Fanning, sent Baylor home victorious.

Down 2-0 on the road, but we stuck together and battled back. Heading home with the dub 💪#SicWVU #SicEm #NCAAVB #SHINE pic.twitter.com/pLWzpOYMaQ