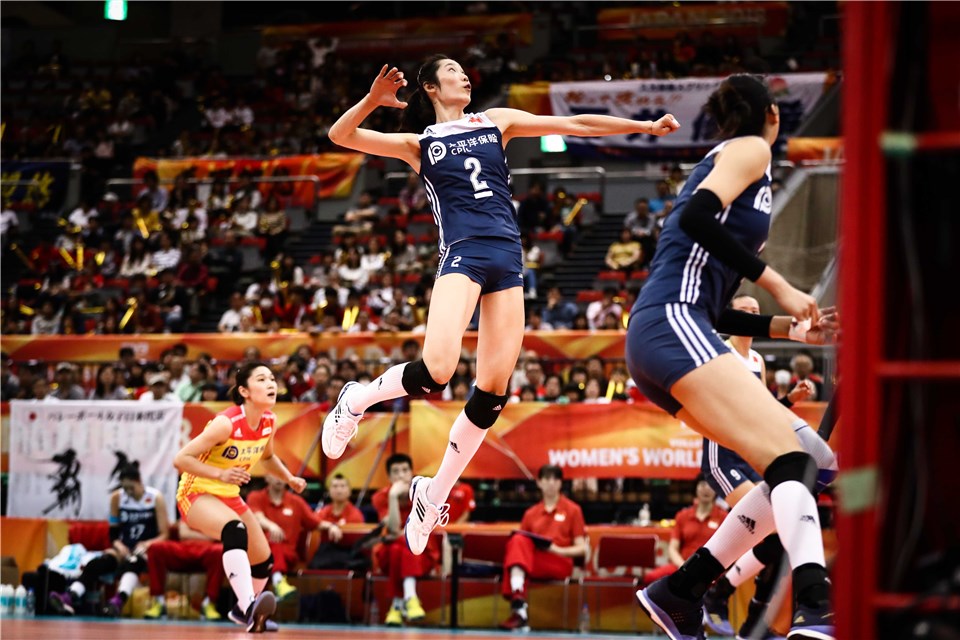 Zhu Ting led the way as China rallied for a 5-set win over the United States to open Final Six play at the World Championships leaving the Americans in a must-win situation on Monday against the Netherlands.  Current Photo via FIVB

“Definitely, it was such a disappointing match, but I am really proud of our group,” U.S. middle blocker Foluke Akinradewo said. “We put together a great match. We were aggressive from the start. We were making great defensive moves and our offense was going. Just a few things here and there could have switched it in our direction. Overall, I am really proud of our team. Obviously, China is a really strong team. I am just excited to bounce back tomorrow against Netherlands.”

Zhu Ting turned in a match high 25 points for China and Kim Hill answered with 24 for the United States, but it was not enough to lift the Americans to victory and snap a two-match losing skid.

Hill tallied her 24 points on 22 kills and two blocks, while three other players scored in double digits: Foluke Akinradewo (18), Jordan Larson (17) and Rachael Adams (15). Akinradewo and Larson downed 16 kills apiece, while Adams chipped in 12 putdowns and three blocks. Carli Lloyd paced the team at the net with four blocks. Michelle Bartsch-Hackley played in just Set 3 and did not score. .

The Americans boasted the early lead in Set 1, going up 6-3 and then on to a 16-14 advantage midway through. From there, China scored six of the next nine including a kill and a block by Zhu to take a 20-19 lead. A service error and a block by Yan Ni finished off the comeback win for China at 25-22.

The United States again struck first in Set 2, building a 15-11 lead at the midway point. The Americans held on from there, following Adams and Akinradewo to the 25-19 win.

Team USA led Set 3 from start to finish, although China was within one at 11-10. Akinradeo, Larson and Hill chimed in offensively as the team claimed a 25-20 win.

China turned the tables in Set 4, leading 12-9 early and taking a four-point lead at 17-12 after a block by Yuan Xinyue and a Zhu Ting ace. The Americans chipped away, pulling even at 22, before the Chinese finished the set on a 3-1 run.

In the fifth, China boasted an 8-5 lead at the changeover and used a 4-0 run to push the margin to six at 13-7 en route to the 15-9 win. A kill by Gong Xiangyu clinched the comeback victory.

“t was a great game,” Chinese coach Lang Ping said. “The U.S. team plays fast. We would have liked to win in a more solid way. There are many things that happen in a match. We can learn a lot from this match. We look forward to the next one.”

The loss puts the USA in a must-win situation as they face the Netherlands on Monday. A 3-0 or 3-1 win would move the Americans on in to the semifinals, while a five-set win would leave the team’s fate up to Tuesday’s result between China and the Netherlands.