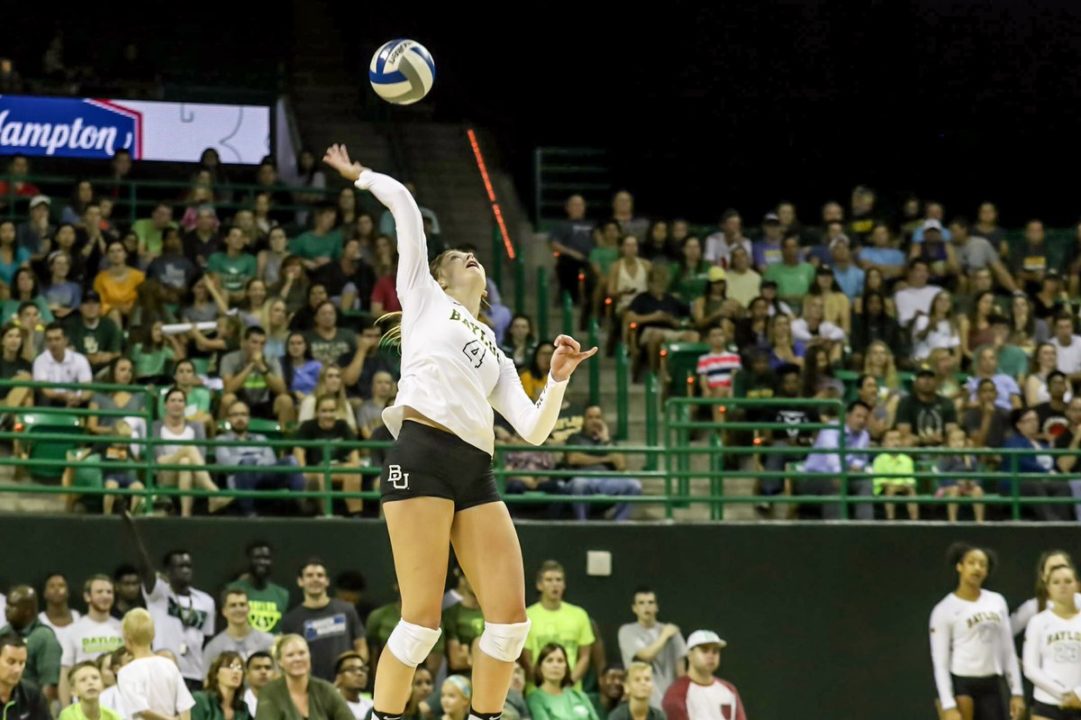 After failing to convert on four set points in the opening frame, #24 Baylor clawed back to defeat the Texas State Bobcats in four at the Jason’s Deli Baylor Classic.

For the Bobcats, freshman setter Brooke Johnson recorded a double-double of her own (17 assists, 10 digs) while sophomore outside Megan Porter paced the offense with 10 kills.

Down 24-21 in the first, Texas State stormed back to tie the frame at 24-24 on a double-block by senior Erin Hoppe and senior middle Jaliyah Bolden. The Bobcats fought off a 4th set point at 25-24 then followed it with a Bolden kill and solo stuff that earned them the deuce-set victory.

Baylor took control early in set two and never looked back, winning 25-10 on a Staiger kill. It was more of the same in the third as the Bears used Staiger’s 18th kill of the match to seal a 25-13 victory.

In the fourth, Texas State jumped to a 4-0 lead and was as close as 20-19 late in the set before a solo stuff by Fanning and kill by junior outside Aniah Philo created the necessary separation to pull off the 25-21 victory.

Bears Have 12 Blocks In The Four-Set Victory.

Aniah Philo had another impressive night in the back row, notching 19 digs against Texas State and holding the Bobcats to a .042 attack effort.

BU stormed back in the second set and added 18 kills to tie up the match, 1-1.

The momentum stayed with Baylor in the third set as Texas State hit -.286 for three kills, fueling a 2-1 match advantage.

BU and TXST would battle it out in the fourth set, but a late run with Hannah Lockin at the service line proved to the difference as Staiger put away the final point for the Baylor win.

HIGHLIGHTS
• Katie led all players with 24 kills and added 14 digs for her eighth double-double of the season and fifth-straight in 2017.
• The Bears put up 12.0 blocks against the Bobcats, holding them to 6.0 blocks at the net.
• Shelly Fanning nearly had a double-double with 12 kills and eight blocks, hitting .500 on the night.
• Aniah Philo led Baylor in digs for the third consecutive match, tallying 19 against the Bobcats.
• The Bears have now won 10 of the last 11 matchups against Texas State, dating back to 2001.
• Katie Staiger is now 12 kills away (1,536) from being the all-time Baylor kills leader in the rally scoring era (1,548).

TOP QUOTE #1
“Shelly is awesome — to be hitting at that .500 mark is awesome. We think she can do even more. I love her clip, love what she is doing, and she is always going to be disruptive. I think again that the passers did a really good job at keeping the ball as a target so she is an option. Really, the defenders do a good job of digging for Shelly to be an offensive threat as well.”-head coach Ryan McGuyre

TOP QUOTE #2
“We want to have some room with our pin hitters this tournament, and we got that with Katie. You know, Shelly and Katie, with us playing good defense, really is probably enough, but we can add our other middles and get Yossi dialed in. Once again Shelly and Katie did a great job.” -head coach Ryan McGuyre

WHAT’S NEXT
The Bears host St. John’s and UTSA at the Jason’s Deli Baylor Classic Saturday at 11 a.m. and 7 p.m, respectively.

The Bobcats (8-4) took a set off the nationally-ranked foe, but they were inevitably unable to earn their first win over BU (8-3) in Waco since 1990.

TXST was feeling the effects of competing against one of the nation’s top teams early on, as Baylor initially powered ahead by a score of 9-3 in its home arena. The Bears opened up a 14-7 lead and later found a 21-15 advantage. Texas State was able to crawl within two at 23-21, but the home side won the next rally to enjoy three set points. The maroon and gold swatted away all three chances and scored six of the last seven points to steal the opening frame 27-25.

The second set went in favor of the home side. Baylor initially turned a 3-3 standstill into an 11-4 lead before cruising to a 25-10 victory. The third period had a similar vibe to the second, with the Bears earning an 11-4 lead that later swelled into a 20-10 advantage. Texas State picked up a trio of points before eventually succumbing to Baylor 25-13.

Texas State fell behind 17-11 in the final set but was able to fight back to within one at 20-19. Baylor was able to close the door by winning five of the last seven points and take the match at 25-21.

Texas State is now set to wrap up the Baylor Classic with a pair of neutral-site contests Sept. 16. The Bobcats will face UTSA at 1 p.m. before taking on St. John’s at 5 p.m.