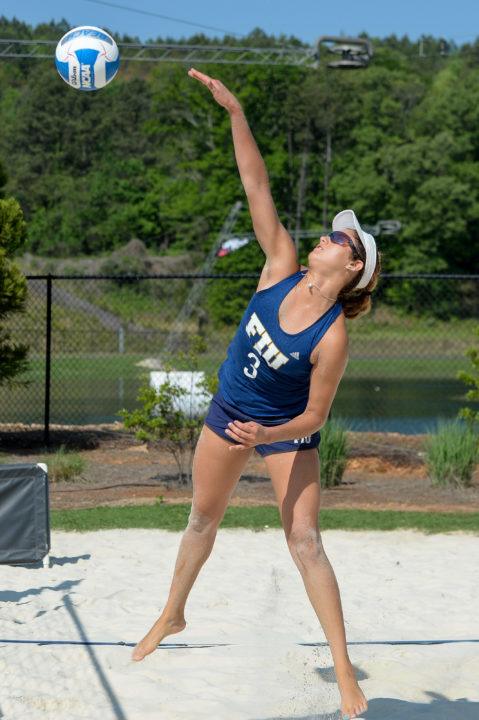 The bottom half of FIU's lineup, including 4s Lina Bernier (above) and Katie Hogan, came up big in the semi-finals as they have all season. Archive Photo via Todd Drexler, CCSA Photos

With big rain expected throughout the day on Sunday, the CCSA decided to move the conference semi-final matches to Saturday evening in Emerson, Georgia.

In one semi-final, the matchup was between 1-seed Florida State: the 4th-ranked team in the nation, and 15th-ranked Florida Atlantic, the surprise runner-up in Pool B earlier in the day. The other saw Pool B winners LSU (ranked 7th nationally) face FIU (ranked 10th nationally) in a matchup with not only conference, but national implications in terms of NCAA tournament invites and seeding.

In Sunday’s final, Florida State will meet FIU for the 4th time this season. In spite of the Seminoles’ lofty national rankings all season, FIU has played them hard – pushing the first 2 meetings to 3-2, before Florida St. broke through a little for a 4-1 victory in pool play on Saturday.

Florida State was dominant in their semi-final win over FAU, taking a 5-1 victory. Vanessa Freire and Victoria Paranagua took consecutive 21-10, 21-10 set wins over Jazmine Barker and Brittany Pellitieri of FAU. Freire and Paranagua were the only Florida State pairing to go 3-0 on the day, winning all 6 sets played and only once allowed an opponent to score more than 14 points.

“I am super proud of them today,” Florida State head coach Brooke Niles said. “We took care of business today and expected to be in the finals.”

While the relative national rankings don’t indicate that this was a big upset, it felt like one on Saturday evening as Florida International tipped off LSU to advance to the championship game.

LSU still should receive an invite, while the committee is left with a tall task in evaluating FIU, who have had big wins and played tough against top-5 opponents down the stretch of the season, but have also had bad losses (like a 5-0 sweep against South Carolina and 3-2 loss to TCU).

The Panthers now find themselves in the CCSA Championship game, thanks in large part to the bottom half of their lineup that has been clutch for them all season. Coming into the CCSA tournament, FIU’s line-by-line winning percentage got better as the lines went lower:

That storyline held mostly true on Saturday, as wins at the 4 and 5 line gave FIU an early lead, before Fede Frasca and Bianca Bianchin were able to seal the match at 1. FIU’s lineup has bounced all over the place this season, and Frasca and Bianchin have played all 5 lines in their 19 games together. But at the end, it was at the top of the order where they came up aces in Saturday’s semi-finals.