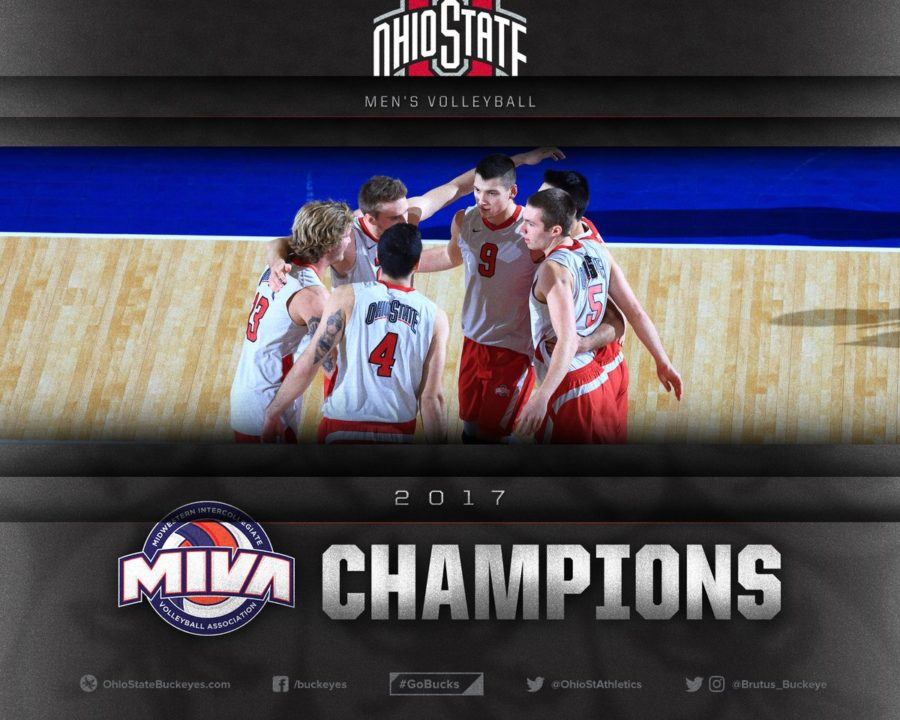 A .464 hitting effort and 9.5 blocks helped the No. 2 Buckeyes to a sweep of No. 14 Grand Canyon in the MIVA Tournament final. Archive Photo via Ohio State Athletics

An efficient offensive attack and standout blocking effort helped No. 2 Ohio State to a sweep of No. 14 Grand Canyon on Saturday night. The Buckeyes hit .464 in the match and outblocked GCU 9.5 to 1 in the 25-16, 25-22, 25-11 win to clinch its 16th MIVA Tournament title and an automatic berth in the NCAA Tournament.

Ohio State hit nearly .500 in two of the three sets and nearly .400 in the third, while holding the Antelopes under .200 in all three stanzas.

Senior opposite Miles Johnson led all hitters with 11 kills, while serving up a team-best three aces. Junior outside hitter Maxime Hervoir and junior outside Nicolas Szerszen added nine kills apiece, while redshirt senior middle Driss Guessous was a perfect 7-for-7 on hitting attempts. Hervoir hit at a .538 clip and put up a team-best seven blocks. Senior libero Gabriel Domecus pulled up five digs, while Hervoir and Szerszen added four.

Junior outside Cody Williams paced the Antelopes with seven kills, while hitting at a .400 clip and adding a team-leading five digs. Senior middle Drake Silbernagel and senior opposite Matthew Kinnebrew followed with six kills apiece. Silbernagel hit .455 for the match. Redshirt junior middle Ashton King served up a pair of aces.

The Buckeyes took a 12-7 lead as Hervoir downed three kills and Leeson and Guessous each added two. OSU expanded its lead to six at 17-11 as Guessous tallied to more putaways. The Antelopes cut the margin to four three times, last at 20-16, before Ohio State ended the stanza with five straight points, including a trio of Szerszen kills.

A trio of Antelope errors and kills by Guessous, Hervoir and Szerszen gave Ohio State an early 10-6 lead in Set 2. Grand Canyon scored eight of the next 12 points to knot the score at 14 on back to back aces by King. Silbernagel also managed a kill and an ace in the rally. The teams tied again at 15 before Penn State pushed ahead by three at 19-16 on a Shalev Saada service ace. A Szerszen putaway and two Nittany Lion miscues made it 19-all. The teams split the next six points, five on errors, to bring it to 22-22. A service error, a block and a Johnson kill nabbed OSU the 25-22 win.

Ohio State wasted no time putting Set 3 out of reach, scoring 12 of the first 14 points. Hervoir posted three kills and a block, while Leeson managed a trio of stuffs in the opening run. Two kills and a block  by Szerszen made it a 13-point game at 17-4. Grand Canyon would get no closer than 12 the rest of the way. Kills by Szerszen and Johnson capped the evening.

Watch highlights from the match here.

COLUMBUS, OHIO – The record-breaking season for the Grand Canyon men’s volleyball team came to an end on Saturday evening as the Lopes were defeated 3-0 by the No. 2 Ohio State Buckeyes. GCU advanced to the final round of the MIVA Tournament this week after upsetting Lewis on Wednesday. The Lopes end their season with an overall record of 19-11.

“This was the service pressure we knew that they were capable of,” head coach Matt Werle noted about the Buckeyes. “Ohio State played every facet of the game really well and they deserve a lot of credit. You could tell that we were fatigued from the long week.”

The Lopes hosted OSU twice at home this season, falling short in both matches but pushing the Buckeyes to the limit. This time, Ohio State had the opportunity to host the Lopes and they made the most of it, winning by scores of 25-16, 25-22, and 25-11. The Buckeyes bested GCU at both the service line and at the net, out-blocking the Lopes 9-1.

Setter Michael Milstein and middle blocker Drake Silbernagel were named to the MIVA All-Tournament team following the game. Milstein led the team with 19 assists and three digs during the match while Silbernagel was the best attacker on the team, hitting .455 and knocking down six kills. Both players are seniors and were competing in their final matches as Lopes.

“I could not be more proud of this group of young men.” Werle added. “Coming into this season, we were voted 6th in the MIVA. It took until the second to last week of the regular season before coaches started respecting this ‘team.’ I know the numbers don’t show a lot tonight, but this team has accomplished so much this season. This program is moving in a direction it can be proud of. I am extremely thankful for this group.”

Amongst the accomplishments for GCU this season were program-bests in overall wins and conference wins. The Lopes went 11-5 in the MIVA and earned 19 total wins. Grand Canyon also earned a national ranking for the first time, entering the AVCA polls as No. 15 and moving up to No. 14 by the end of the regular season.

GCU will return 16 players to the team next season and will have plenty of leadership as half of the returners will be seniors. After only two seasons at the helm, Werle has established the Lopes as a force to be reckoned with in men’s volleyball. GCU will seek to defend this reputation next season as it transfers to the strong Mountain Pacific Sports Federation conference.