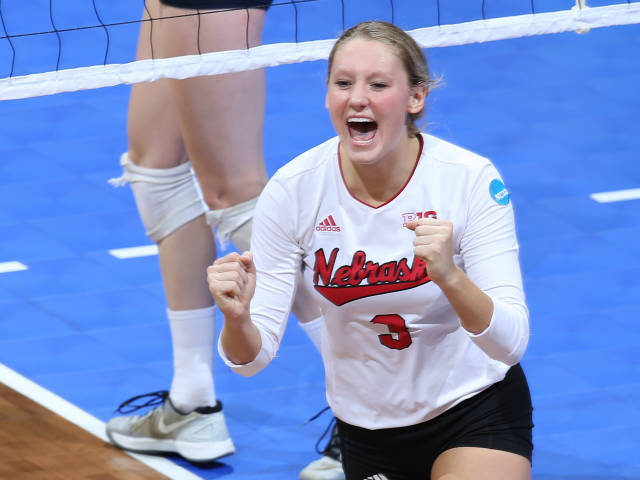 In a Regional Semifinal meeting of ex-Big 12 foes, Nebraska was led by Kelly Hunter in a sweep of Colorado to reach their 6th straight Elite 8. Archive Photo via Scott Bruhn/Nebraska Communications

In a renewed Big 12 rivalry, it was powerhouse and fifth-seeded Nebraska sweeping Colorado to move forward to the Regional Final tomorrow. The result is that the Cinderella run for Colorado comes to a close after a Sweet 16 appearance while the Cornhuskers will now be the road team at #4 Kentucky with a spot in the Final Four on the line.

The biggest advantage though came via the serve – which can fuel stronger defensive numbers by putting the opposition in tough positions. Not only was Nebraska serving strong and aggressive (nine aces), but they were accurate (seven serve errors). Compare that to Colorado’s numbers (two aces: four serve errors) and you can see the advantage Nebraska had in serving and serve receive. The epitome of it all was Nebraska’s defense on Colorado’s top option in Alexa Smith, who hit just .023 after being targeted in the serve with three reception errors.

Early on, Nebraska utilized a 5-1 run early to nab a 9-5 edge,  but Colorado would come back to tie at a dozen. Again Nebraska inched in front by a four point lead as they snagged the 21-17 advantage, but one more time Colorado tightened it to 21-19. Briana Holman (six kills, .385, six blocks) made it 22-19 before freshman Jazz Sweet (nine kills, .533, four blocks) took over with back-to-back kills to earn a set point chance. Nebraska made quick work of that opportunity with a Kelly Hunter (35 assists, 10 digs, two aces) ace at 25-19.

That strong play continued into the second set as the Cornhuskers jumped in front 10-6 after the Buffaloes took three of the first four. Things got out of hand for Colorado after that though, as four Buffaloes’ errors combined with Nebraska’s attack and serve for an 8-0 run that was capped off by an Annika Albrecht (13 kills, .344, nine digs, two blocks). Things didn’t get much better for Colorado the rest of the set either, as Nebraska would finish things off at 25-11.

Colorado surpassed their second set point total early in the third, as they led 12-11 behind a strong start from Alexa Smith (nine kills, eight digs) and Frankie Shebby (eight kills, 15 digs) in the game. Mikaela Foecke (seven kills, seven digs, two aces) knocked a kill down for Nebraska to tie it though as Nebraska would never trail again from that point. Sure enough, they garnered a bit of separation and took what would end the tightest set at 25-21.

In what was the first meeting since 2010 between the former Big 12 Conference members, Nebraska earned its 50th all-time win against Colorado – who has just seven against the Cornhuskers. It was an overall solid season for Colorado who finished hot in making the Regional Semifinals, while the beat goes on for Nebraska who now will head to their sixth consecutive Regional Final match. They’ll now go for their third straight Final Four as they take on Kentucky in Lexington tomorrow at 4 p.m. ET.