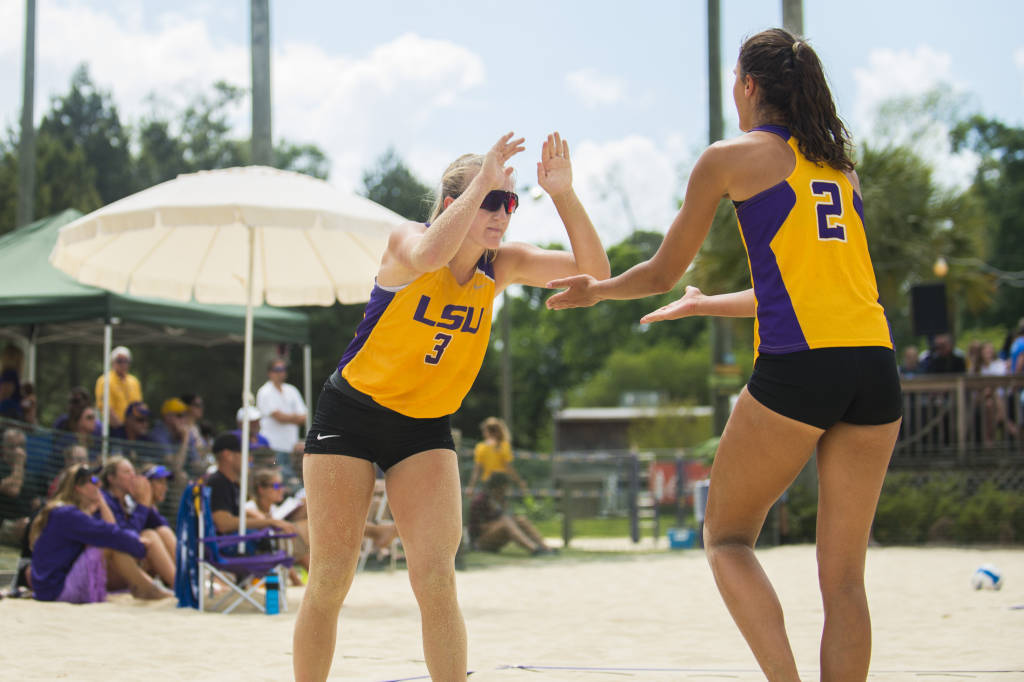 While there are still a few mid-week games left, especially out west, to be played in the NCAA beach volleyball... Archive Photo via LSU Athletics

While there are still a few mid-week games left, especially out west, to be played in the NCAA beach volleyball regular season, most of the country either finished their seasons altogether, or made final preparations for their conference tournaments, on Saturday.

At the Battle on the Bayou in Baton Rouge, LSU wrapped their regular season with their 19th and 20th consecutive victories.  The Tigers struggled at the beginning of the season, losing 4 of their first 5 and 5 of their first 7 games. Since March 18th, though, they’ve been on a tear that has all-but-cemented their spot at the NCAA Championship tournament after missing out on Gulf Shores last season.

“I think when you start out the season the way we did you just want to try and get into a rhythm and start to win,” said LSU head coach Russell Brock. “We knew through the middle of the season and down toward the end that we would have a great opportunity to get some wins. We knew we were playing well, and it was just a matter of turning our play into W’s.”

“To play as well as we have for that long is hard to do for anybody. I couldn’t be more proud of the group, and I think it’s just another testament to working hard and executing and good things will happen to you.”

LSU finishes the regular season with 22 wins, which already is a program record. On Saturday that include wins over Texas A&M – Corpus Christi and #10 Georgia State. Katie Lindelow and Olivia Powers were 4-for-4 at the #2 line this weekend, and now move to 19-3 on the season.

South Carolina also set a school record for wins, pushing their regular season win total to 21. That already beats last season total of 20 as the best in program history. The Gamecocks finished the day with a 4-1 win over Jacksonville St. and 5-0 sweep of College of Charleston.

In Tallahassee, #2 Pepperdine got their thunderous revenge over Florida St. with a 4-1 victory on Saturday. Florida St. won a 3-2 decision on Friday, but in the rematch, Pepperdine handed the Seminoles their first home loss in program history.

Florida St. did pick up a win against #14 FIU, however. The Panthers surged at the end of the season, and in spite of two losses to close their regular season on Saturday, they did push the #2 team in the country Pepperdine and the #4 team in the country Florida St. to 3-2, which can’t hurt the selection committee’s opinion of them. FIU has the #5 seed in the CCSA tournament (see the full pool here).

Out west, Hawaii beat St. Mary’s for the second straight day, but after Friday’s sweep turned into just a 4-1 win on Saturday. St. Mary’s top pair of Lindsey Knudsen and Payton Rund were able to beat Nikki Taylor and Morgan Martin 2-1 (16-21, 21-18, 15-9). Kundsen and Rund should be participants in the AVCA’s collegiate national championships doubles tournament this season.

Sacramento St. is hitting their peak just as the Big West Conference tournament is approaching in two weeks. They got 3 wins against San Francisco (4-1), San Jose State (4-1), and Cal Poly (3-2) in a triple header on Saturday. That pushed their final season record to 7-9, and included a defeat of a Cal Poly team that has been receiving votes in the AVCA coaches’ poll all season.