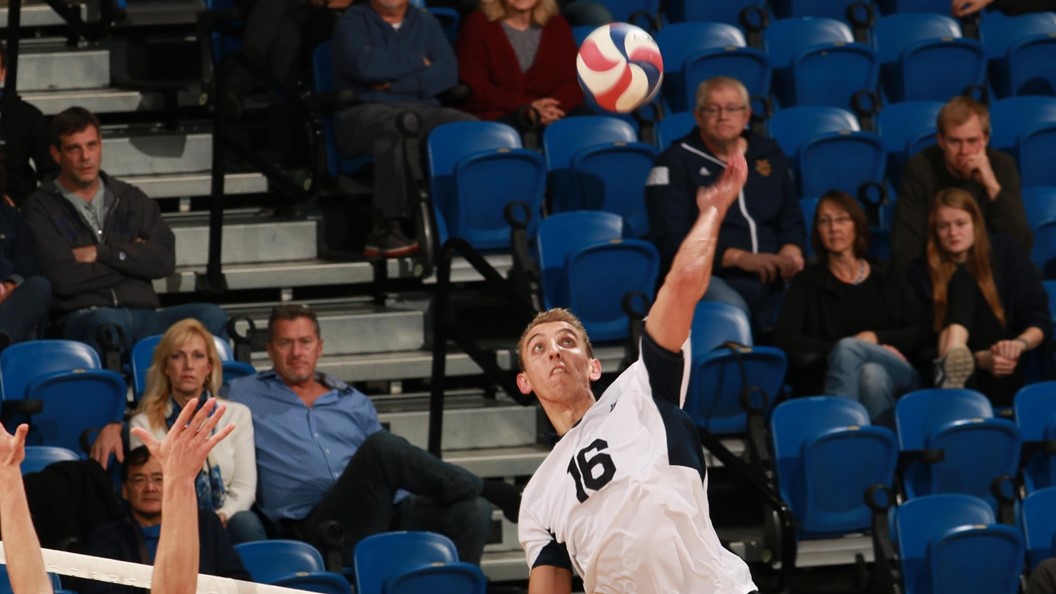 No. 8 UC Irvine pulled the upset in its season opener against No. 5 Lewis, winning via sweep with help from a stout and balanced offensive effort. No. 11 Ball State and No. 14 USC also excelled offensively in victories. Meanwhile, No. 20 UCSD depended on the arm of Tanner Syftestad and his 27 kills en route to a hard-fought five set win over McKendree.

Redshirt sophomore outside Ryan Coenen led all hitters with 15 putaways for the Flyers, while hitting at a .423 clip. Sophomore outside Kyle Bugee was next on the team with seven kills.

It Was Over When: The Anteaters hit at a .536 clip in Set 3, but didn’t pull away until midway through the set. After a tie at 12-all, UCI scored six of the next eight points with two Matthew Younggren kills and three Lewis miscues to go up 18-14. The Flyers narrowed the gap to three seven times, last at 24-21, but could not break through to extend the match. A Schneidmiller kill capped the sweep.

Stat Leaders: Rookie outside hitter Ben Chinnici made a statement in his debut, downing a match-high 16 kills, including six in the final stanza, while hitting at a .609 clip. Senior middle blocker Matt Walsh added 14 putaways on a team-best .684 clip, while adding a team-leading six stuffs. Chinnici and sophomore libero Nick Lavanchy notched seven digs apiece.

It Was Over When: Ball State left little doubt in Set 3, cruising to a 6-0 lead and upped the advantage to 10 soon after at 14-4. Walsh pounded down three kills in the opening rally, while Chinnici tacked on three and Mitch Weiler notched three kills and an ace by the midway point. A 4-0 run, including two Chinnici putaways made it a 12-point game at 19-7. A trio of Bobcat miscues and a kill by Chinnici capped the sweep.

#VICTORY Cardinals take down @LMCBobcatVolley in 3 sets behind freshman Ben Chinnici's effort to open the 2018 season! The Cardinals will be back in Worthen Arena tomorrow night to take on Emmanuel at 7:30pm! #ChirpChirp pic.twitter.com/B7kWsmeUVZ

It Was Over When: After trailing 9-7 in Set 5, UC San Diego scored four straight, including a kill and a block by Drew Sloane, to go up 11-9. McKendree tied it up at 11, but the Tritons came through with four of the final six points for the win. An ace by Bryce Curtis pushed the UCSD lead to 13-11, but kills by Carroll and Ross knotted the score once again. In the end, a pair of putaways by the rookie Harrison closed the door at 15-13 for the Tritons.

Sophomore opposite David Lehman paced the Ducks with 19 kills, hitting .438 and adding five digs. Senior outside Gabe Shankweiler followed with 10 putaways, two aces and two blocks. Junior middle Cooper Diamond posted a match-high five blocks, but it was not enough to lift the Ducks past the Trojans.

It Was Over When: After Stevens rallied to tie Set 4 at 12, USC scored six of the next nine to pull ahead 18-15. Two Wyett kills, two Duck miscues and a solo stuff by Moss gave the Trojans the edge. Stevens was within two twice, last at 18-16, before USC closed things out for good with a 7-2 run. A kill and an ace by Moss set up the final point, which came on a Lucas Lossone putaway.

Ryan Moss had a career-high and match-leading 21 kills to lead the Trojans to their third victory of the season! #FightOn pic.twitter.com/0i7hOGJCGP