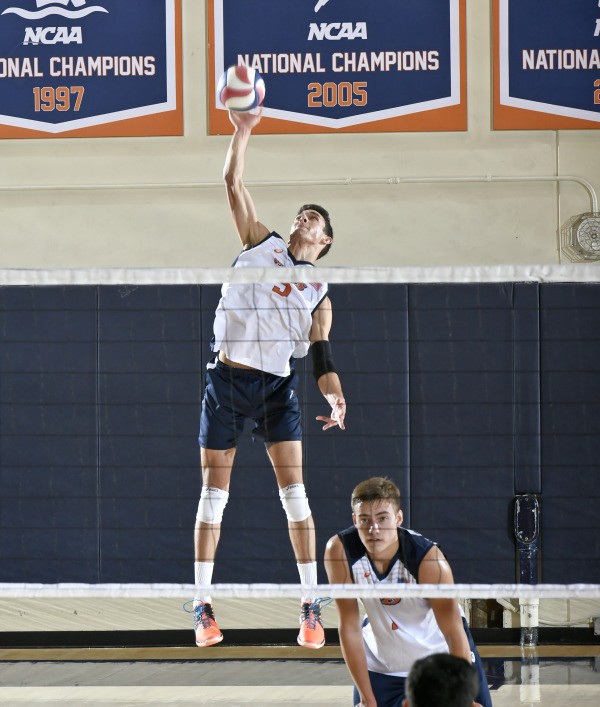 The 9th-ranked Pepperdine men’s volleyball squad will make the short trip down south to take on MPSF opponents and 3rd-ranked... Current Photo via Martin A. Folb

The 9th-ranked Pepperdine men’s volleyball squad will make the short trip down south to take on MPSF opponents and 3rd-ranked Long Beach State on Thursday in the Walter Pyramid.

MPSF/MOLTEN PLAYER OF THE WEEK – Redshirt sophomore David Wieczorek tabbed his first-ever MPSF/Molten Player of the Week honor for his performances on the court last week.  It was the first time this season a Wave has garnered the accolade.  ‘Big Wave Dave’ Wieczorek led the Waves to two MPSF wins last week, first with a four-setter over Cal Baptist and then in a five-setter against USC.  He posted 4.39 points/set on a .356 kill/set effort with a .413 overall attack percentage.  Wieczorek also amassed 0.56 aces/set, 0.44 blocks/set, 0.89 digs/set and 0.33 assist/set.  In nine sets played, he posted 32 kills with only six errors on top of 63 attempts, along with five aces, eight digs and four blocks including one solo.  Against USC on Saturday, he was instrumental again with 17 kills on a career-best .536 hitting percentage.  He produced a season-best four aces, with two blocks and two digs.  Against CBU on Thursday, he led the Waves with 15 kills on a .314 success rate, while adding an ace, six digs and two blocks including one solo rejection.

Leading the Waves’ offensive is David Wieczorek, who has amassed 3.75 kills/set on a .403 output.  He has posted 0.33 aces/et, 0.79 digs/set and 0.46 blocks/set towards the Waves’ efforts.  Michael Wexter has amassed 3.30 kills/set with a .289 hitting percentage, while leading the team with a 0.44 aces/set output.  He adds 1.70 digs/set and 0.70 blocks/set as well.  Leading the team at the net is Mitchell Penning, who posted 0.89 blocks/set after putting up 24 total blocks this season.  He also leads the squad with a .446 attack percentage after tabbing 1.67 kills/set.  Joshua Stewart serves as primary playmaker for Pepperdine with 199 total assists to tab 9.48 assists/set.  He also adds 1.76 digs/set to lead the Waves’ defensive efforts.

LAST WEEK – Pepperdine downed Cal Baptist and USC in the latest installments of Mountain Pacific Sports Federation action last Wednesday and Friday.  First in the four-set win over CBU, the Waves won with 25-20, 23-25, 25-16 and 25-14 final set scores, amassing a .276 hitting percentage with 41 kills and 12 errors on 105 swings.    The team also put up 10 aces, 38 digs and 12.5 team blocks.  The opposition was good for 43 kills on a .078 success rate, while adding three aces, 46 digs and 4.0 team blocks.  David Wieczorek led the team with 15 kills on a .314 hitting percentage, while putting up one ace, six digs and two blocks including one solo rejection.  Alex Harthaller also hit for 11 kills, two aces and seven digs.  Michael Wexter led the team with a career-best five aces, while adding seven kills, eight digs and three blocks.  Joshua Stewart was tops with 33 assists for the Waves as well.

Pepperdine then defeated USC in a five-set battle.  After exchanging set wins with 20-25, 25-21, 21-25 and 25-16 set scores, the Waves rallied hard en route to a 15-11 set five win to take the match.  Pepperdine posted 51 kills on a .310 success rate, while adding seven aces, 33 digs and 10.5 team blocks.  The Trojans were good for 64 kills on a .254 output, while adding five aces, 43 digs and 4.5 blocks/set.  Wexter led the Waves with 19 kills on a career-best .444 hitting percentage, while adding an ace, nine digs and four blocks including a solo.  Wieczorek also hit for double-figures with 17 kills on an impressive .536 output.  He added four aces and two blocks.  Stewart led the team with 43 assists and picked up eight digs and three blocks.  Mitchell Penning added seven kills on a .357 output and led the squad with five blocks.

OPPONENT NOTES: #3 LBSU 49ERS – Pepperdine leads the 49ers with a 51-44 overall all-time record, though LBSU leads with a 26-16 record in the Walter Pyramid.  Last season, the Beach took all three matches played, two in straight sets in the pyramid and one in five in Firestone.  The competition between teams dates back to the first meeting in 1991 when the 49ers took the match 3-1.  The Waves have posted a few winning streaks throughout the years, with the longest occurring from 1984-88 when the Waves won eight-straight.  Pepperdine won six-consecutive matches twice, from 2002-03 and again from 2008-09.

VOLLEYBALL HISTORY – Pepperdine has won five NCAA men’s volleyball championships, second only to UCLA. The Waves have won the MPSF Tournament three times and have won or shared 10 regular-season conference titles. Pepperdine has won either an MPSF regular-season or tournament title (or both) in six of the last 15 seasons. The Waves have finished in the top six in the final AVCA poll in 16 of the last 19 seasons. Pepperdine student-athletes have won national player of the year honors nine times and All-American accolades 82 times. A Pepperdine alum has competed for the U.S. at the Olympics every time since 1984 (Sean Rooneywon gold in 2008).

MARV DUNPHY – Now in his 34th season as head coach of the Waves,Marv Dunphy has time and again proven himself to be one of the top teachers in the sport. He has directed Pepperdine to four NCAA championships, each in a different decade (1978, 1985, 1992, 2005). He was the 2005 National Coach of the Year and is a three-time MPSF Coach of the Year. He entered the 2017 season with a career record of 602-265 (.694).  Dunphy has long been involved with USA Volleyball, having been part of the coaching staff at seven Olympics, including head coach of the 1988 team and consultant coach for the 2008 squad, both of which won gold. Dunphy, along with David Hunt and Joe Trinsey, were on staff when the U.S. Women’s National Team won their first-ever gold medal at a major event (including the Olympics), after winning the 2014 FIVB World Championships.  He and Hunt were also a part of the coaching staff with the most recent 2016 U.S. Women’s National Team in Rio de Janeiro, Brazil, where the pair helped lead the team to a Bronze medal.  He has been inducted into the Volleyball Hall of Fame (1994), AVCA Hall of Fame (2009) and the Pepperdine Athletics Hall of Fame (2010).