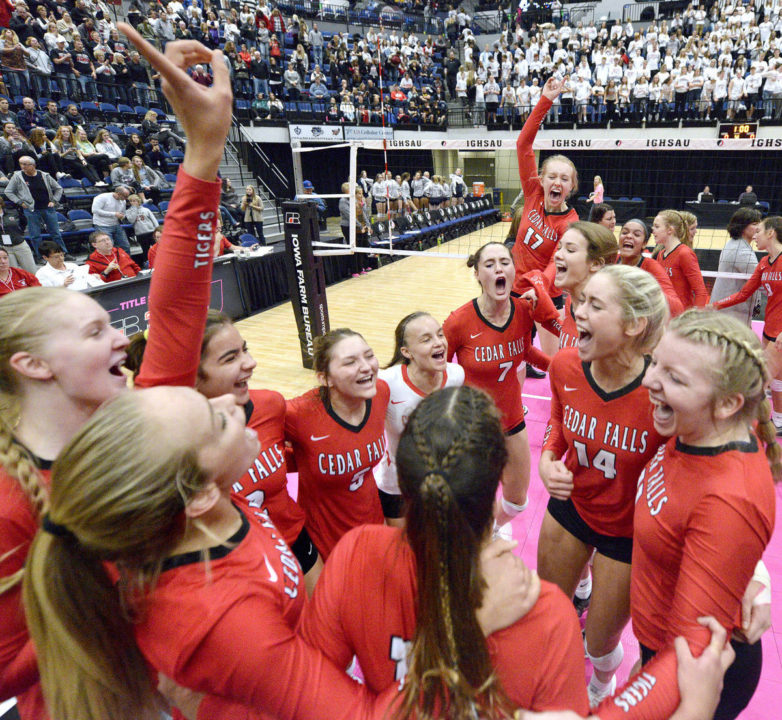 The Iowa high school state championship has concluded with five teams winning a title. Cedar Falls took home their first-ever state title over West Des Moines Valley while most other teams had won a title previously.

Cedar Falls picked up their first-ever Iowa state tournament title with a three-set sweep over West Des Moines Valley. The Tigers returned all of their players from last season and accomplished a school record with their 43 wins on the season. Another huge feat the Tigers achieved was not losing a match or set since September to win 51 straight sets.

Claire Gerdes led the way with 10 kills on a .300 hitting percentage. The balanced offense translated to Akacia Brown who had nine kills, Grace Burken with eight and Taylor Lynch added another seven. Setter Tayah Mahi was just shy of a double-double with 24 assists and nine digs while Abby Hendrickson picked up a match-best 11 digs.

Aliyah Carter was the shining star for Dubuque in the win with 34 kills on a .357 hitting percentage and 14 digs for a double-double. Setter Jenna Gremmel dished out 58 assists and 15 digs for a double-double of her own while Krystal Tranel picked up 27 digs along with Maddie Mccarron‘s 10. Mykenna Horchak added another 18 kills in the win while Anna Sherman recorded 10 kills.

Waterloo made their third straight appearance in the state tournament and their first in 3A after being in 2A last year. They made a statement in their new class by taking the state title over Sioux Center in straight sets for their first title in program history. Last season in 2A, they were the state runners-up and returned three players from that team.

For Waterloo, Anna Sinnott led the way with 24 kills and 11 digs for a double-double while Avery Kroll posted another 11 in the win. Kate Shannon picked up 13 kills along with Ana Ortiz’s 11.

Dike-New Hartford made their 11th straight state tournament appearance and 28th overall. They are 6-1 in their last seven state title runs, winning last year in 3A but were moved down due to a decrease in school size. The team’s head coach, Diane Harms now has six state championships under her belt, tying Teresa Bair and Will Bauman for fourth on Iowa’s all-time list.

Two players recorded double-doubles  – Baylee Petersen with 16 kills on a .424 hitting clip and 10 digs while Morgan Weber added in another 11 kills on a .4-9 hitting performance with 13 digs. Amber Rickert posted another 12 kills while Sydney Petersen picked up a match-best 20 digs.

Janesville won their third straight 1A title in the sweep over Gehlen Catholic and fourth overall. Head Coach Shelley Sorensen now has four state titles under her belt to make her the 11th coach to do so in Iowa.

Kennedy Meister posted a double-double in the win with 14 kills and 11 digs while Bree Thompson recorded another 18 kills and eight digs. Lily Liekweg picked up a team-best 14 digs in the win.