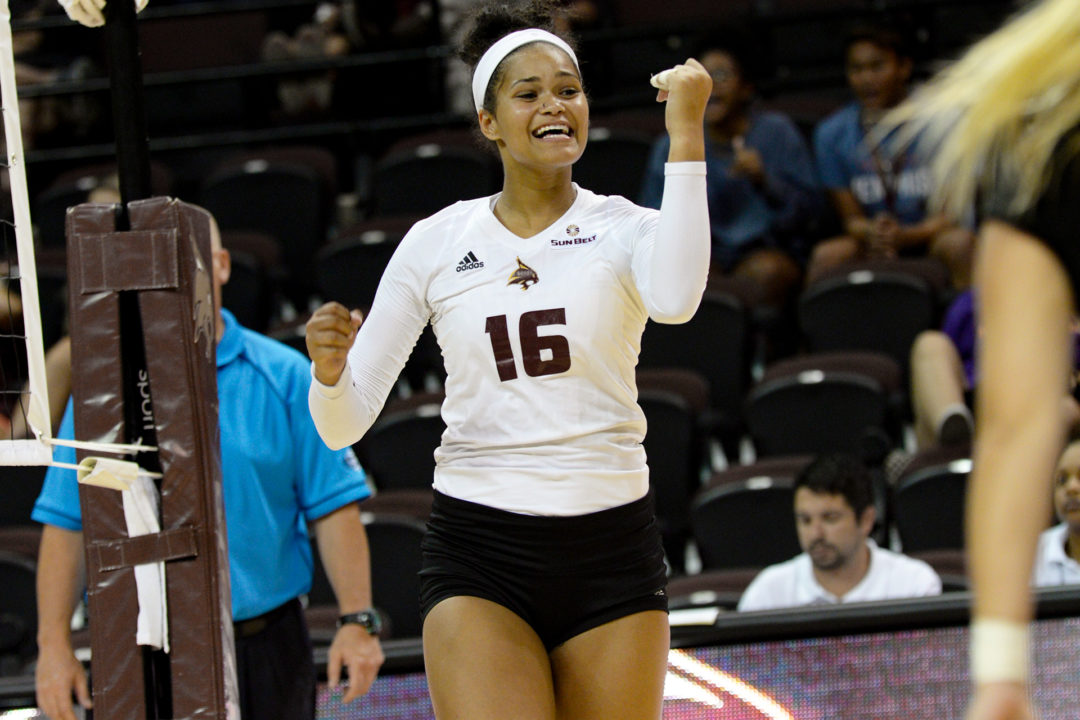 Janell Fitzgerald, Texas State (Fr., OH, Mansfield, Texas)
Texas State freshman outside hitter Janell Fitzgerald averaged 4.14 kills per set (29 total) and hit .389 (eight errors on 54 swings) in a pair of victories. Fitzgerald hit .412 and led the Bobcats with a career-high 18 kills against Little Rock. She then had 11 kills and just four errors in a sweep over the Red Wolves. Fitzgerald also added seven digs and five blocks across the two victories to extend Texas State’s winning streak to eight straight.

Congratulations to @TexasStateVball's Janell Fitzgerald on being named #SunBeltVB Offensive Player of the Week.

Madelyn St. Germain, UTA (Jr., LB, League City, Texas)
UTA junior libero Madelyn St. Germain posted a big weekend, grabbing at least 25 digs in both weekend wins. St. Germain had 25 digs (5.0/set) in a five-setter against Arkansas State and then picked up her game with 35 digs (7.0/set) against Little Rock. She picked up seven assists and an ace against Arkansas State and added nine assists with a kill against Little Rock.

Congratulations to @UTAVolleyball's Madelyn St. Germain on being named #SunBeltVB Defensive Player of the Week.

SETTER & CO-FRESHMAN OF THE WEEK

Emily DeWalt, Texas State (Fr., S, Helotes, Texas)
Texas State freshman setter Emily DeWalt had double-doubles in victories over Little Rock and Arkansas State. DeWalt averaged 14.00 assists/set (98) and 3.43 digs/set (24) while adding six kills, four aces and a block. She had 55 assists and 14 digs in a four-set win over the Trojans and tallied 43 assists and 10 digs in a sweep over the Red Wolves. Both assist totals were the most this season by a Sun Belt player in a three- and four-set match, respectively.

Congratulations to @TexasStateVball's Emily DeWalt on being named #SunBeltVB Setter and Co-Freshman of the Week.

CO-FRESHMAN OF THE WEEK

Anett Nemeth, Coastal Carolina (Fr., OH, Pecel, Hungary)
Coastal Carolina freshman outside hitter Anett Nemeth led the Chanticleers to a pair of wins in their first two Sun Belt matches of the season, averaging 4.14 kills/set and 5.86 digs/set with a .274 hitting percentage. All three numbers were team highs. Nemeth had a pair of double-doubles with 17 kills and 26 digs against Louisiana and 12 kills and 15 digs against ULM. She also had a team high of four service aces and added three blocks.

Congratulations to Anett Németh for another @sunbelt Freshman of the Week award after a 2-0 start to conference play where the Hungarian tallied 4.14 kills/set (.274) while leading the Chants with 5.86 digs/set.#ChantsUp 👌 pic.twitter.com/OxLui0q2Dw