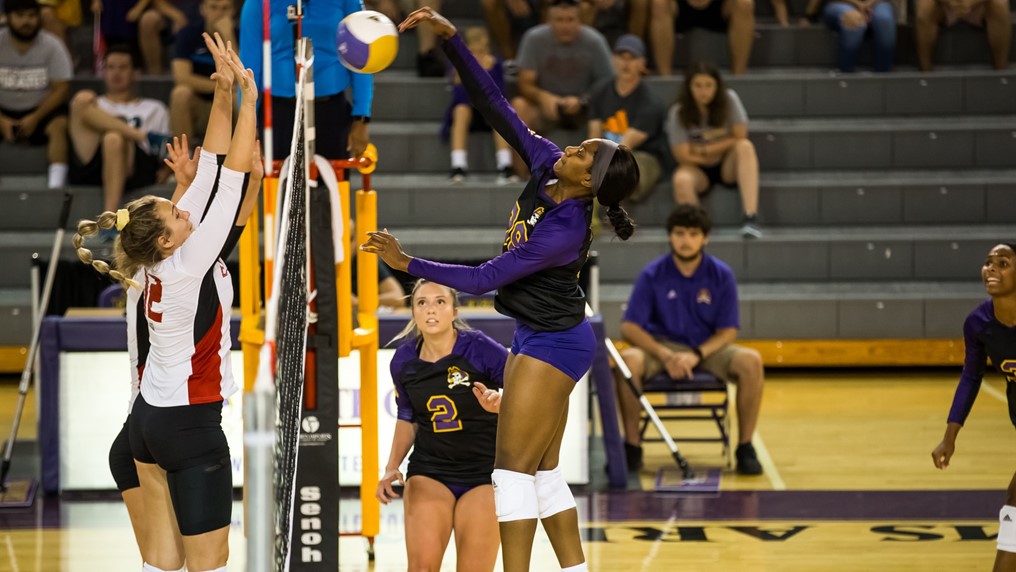 PROVIDENCE, R.I. – The American Athletic Conference has announced the winners of the league’s weekly volleyball honors for the week ending on October 7.

Toya Osuegbu * Jr. * MB * ECU
Osuegbu was consistent at the net through two road wins, recording 12 kills in each victory, while hitting .417, as the Pirates extended their winning streak to five matches and moved up to third place in The American standings. She hit .556 with 12 kills and four blocks in a 3-1 win at UConn on Friday. She added another 12 kills and fueled her team’s .343 hitting percentage on the way to completing a weekend sweep with a fifth-straight 3-1 win at Temple on Sunday.

🗣️ Big congratulations to @osgbu for earning @American_VBall Offensive Player of the Week honors! She averaged 3.00 kills per set and hit .447 in our 3-1 wins at Connecticut and Temple over the weekend. ☠️ #WeUp pic.twitter.com/Ti8b1BRJil

Jordan Pingel * Sr. * L * UCF
Pingel averaged 6.38 digs per set and paced UCF to two big wins over the weekend, extending the Knights’ winning streak to 11 matches in a row with a 5-0 conference record. She started off the week with 23 digs in a 3-1 win against Tulsa, handing the Golden Hurricane their first conference loss of the year. She recorded another 28 digs on Sunday in a hard-fought 3-1 win over 2017 American champion Wichita State, as UCF defended its home court and improved to 8-0 at the Venue this season.

Jo was an absolute rock in the back row this weekend ✊

No surprise that she was the @American_VBall Player of the Week 🙌 pic.twitter.com/2iDReSaWYu

Dasha Cabarkapa * R-So. * MB * Cincinnati
Cabarkapa made her presence felt at the net, knocking down 19 blocks through a 2-0 weekend for the Bearcats, who remain undefeated with a 5-0 conference record. Averaging 2.71 blocks per set, she had eight stuffs in a sweep over Temple and a conference and career-high 11 blocks in a 3-1 win over UConn. She also recorded eight kills with a .412 hitting percentage.

Montana Watts * Jr. * L * SMU
Watts had a solid back-row performance in the Mustangs’ sole match over the weekend. She bumped 24 digs (8.00 per set) in a sweep over travel partner Houston. She passed well, recording a perfect reception percentage on 15 attempts to help her side hit over .250 in the win.

Dayna Kern * Sr. * MH * Tulane
Kern led the Green Wave offensively, tallying 12 kills while hitting .435 with three blocks to help her side to its first conference win of the season in a 3-1 victory over travel partner Memphis. Kern ranks No. 2 in the conference this year with 1.26 blocks per set.

Emily Thorson * Sr. * OH * Tulsa
Thorson averaged 4.00 kills, 1.62 digs and 0.75 service aces per set over the weekend. She posted 13 kills and a career-high six service aces en route to leading Tulsa to a 3-1 win over USF with 13 team aces on Sunday. Thorson also recorded 19 kills and seven digs at UCF on Friday.

Giorgia Civita * So. * L * Wichita State
Civita had another stellar back-row weekend, averaging 7.25 digs per set with a perfect reception percentage on 61 attempts. Civita began the weekend with 26 digs and six assists in a 3-1 win over USF. She then added 32 digs on 36 receptions with no errors in the Shockers’ 3-1 setback at UCF Sunday.