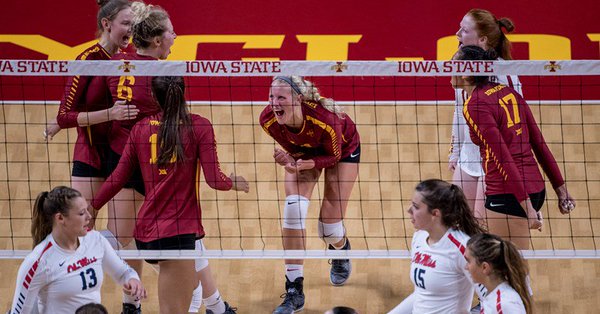 Iowa State, Ole Miss and Oregon State each got their first win of 2018 under their belts at the Iowa State Challenge on Friday in a mixed bag of results. Caroline Adams (Ole Miss) and Hali Hillegas (ISU) each reached the 1,000 dig milestone on the day.  Current Photo via Iowa State Athletics

Iowa State, Ole Miss and Oregon State each got their first win of 2018 under their belts at the Iowa State Challenge on Friday in a mixed bag of results.

Key Stats: A dominant serving effort helped Ole Miss rally past Virginia in four sets. The Rebels outdid the Cavaliers 10-3 from the end line to overcome deficits in hitting percentage (.199 to .125), kills (55-49) and blocks (12-9).

Stat Leaders: Emily Stroup posted a 21-kill, 11-dig double-double and added a team-best three aces and three blocks to lead the Rebels. Aubrey Sultemeier followed with 11 kills on a team-best .333 hitting effort and put up a match-high six blocks. Caroline Adams joined the 1,000-dig club with 24 saves in the match.

The Cavaliers led 9-6 in Set 3, before a string of four ties, last at 13. Ole Miss took over from there with a 5-1 run to make it 19-14. Virginia tied it up at 21 and 22 and thwarted two Rebel match point tries to tie it at 24. UVA had its own set point try at 26-25, but couldn’t convert. Ole Miss eventually won on its eighth attempt as Wernentin and Sultemeier put up a final block.

Key Stats: Oregon State rallied to take the final two sets in a five-set battle with Virginia, despite being outhit in both stanzas. The Beavers, which was buoyed by a .654 hitting effort in Set 2, hit .207 for the match, while the Cavaliers managed a .172 clip. OSU also boasted a 63-54 lead in kills, 15-7 advantage in blocks and a 4-3 edge in aces.

How It Happened: The Beavers trailed 11-7 in Set 4, but rallied to tie it at 12 and took their first lead of the stanza at 21-19. Two blocks by Underdown and Schell and two Goings putaways sealed the 25-22 win and sent the match to a decisive fifth set.

In the tiebreak, Oregon State jumped ahead 3-0 only to see Virginia score nine of the next 11, including four OSU miscues,  for a 9-5 advantage. The Beavers answered with a 7-1 run, including three Underdown putaways, to push in front 12-10. The Cavaliers called timeout and tie it at 12, setting off a string of four ties, last at 15. Oregon State won it on their fourth match-point try, following two Goings kills and a Virginia hitting error.

Emily Stroup was the top scorer for Ole Miss, posting her second double-double of the day with 12 kills and 12 digs. Stroup’s nearest help came from Caitlin Wernentin‘s six putaways.

How It Happened: Iowa State pulled away in the second half of Set 1, outscoring Ole Miss 8-5 down the stretch with help from three hitting errors.

The Cyclones boasted a 16-9 lead midway through Set 2 and put their foot on the gas from there, scoring seven straight, including three Lazard putaways, to vault ahead 23-10. A hitting error clinched the 25-11 win.

Trailing 5-3 in Set 3, Iowa State turned it on care of three Lazard aces and two Candelaria Herrera kills, jumping out to a 12-5 lead. Down 24-13, Ole Miss made a late charge to extend the match, scoring six straight, three on ISU miscues, prompting an Iowa State timeout. Hannah Bailey scored out of the break to wrap up the win.