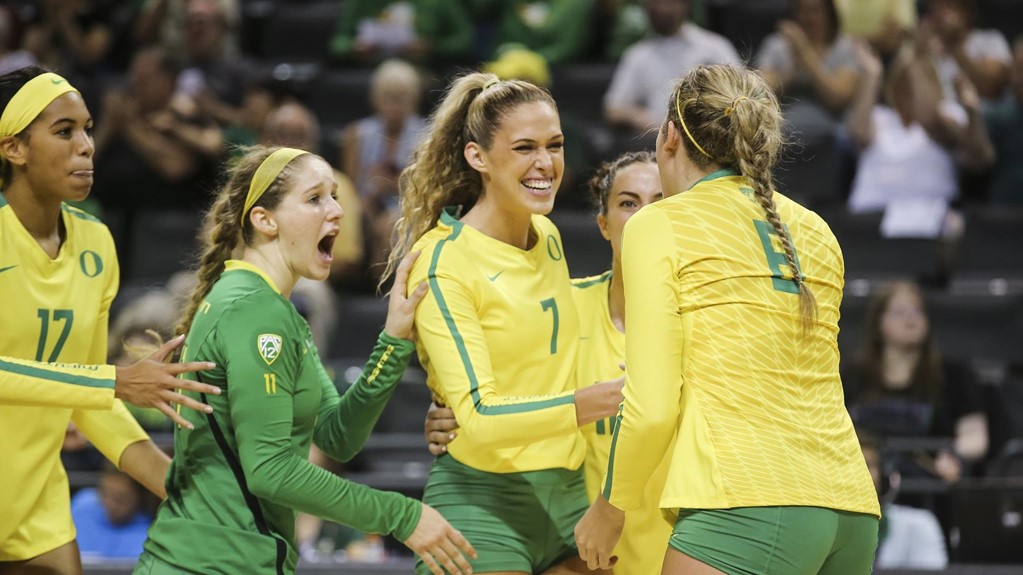 After trailing 7-5 in the decisive fifth set, Oregon pulled away with a 6-2 run, including three Johnson kills. Taylor Mims tied it up at 11 with back-to-back kills. The teams traded points leading to ties at 12 and 13, before Johnson closed out the match.

The Cougars started the match with a 7-0 run, including five kills, three by Mims. Oregon scored 11 of the next 15 to erase the deficit and knot things up at 11. Five WSU errors and kills by four different players propelled the Ducks in the run. Oregon turned a 15-12 deficit into a 17-16 lead with three kills, a block and an ace. After a tie at 19, the Cougars grabbed the win with a 6-3 run, including two kills each by Mims and Schoenlein.

Oregon built a 14-9 lead in Set 2 and overcame a late WSU rally for a 25-23 win. Five Cougar errors and a pair of blocks by Stone helped the Ducks to the five-point edge. Washington State vaulted ahead 20-19 with an 11-5 run, including two Dirige aces and four Schoenlein putaways. Down 21-20, Oregon notched two kills by Agost and two blocks en route to a 25-23 victory.

WSU scored seven straight to turn a 7-4 deficit into an 11-7 lead in Set 3, but it was not enough. Two blocks and a kill by Ella Lajos and an ace by Phillips gave the Cougars the four-point advantage. Oregon scored 14 of the next 20 points with help from five Agost putaways and three by Sumeet Gill. Agost, Page and Stone chipped in kills as the Ducks took the 25-16 win.

The teams split the first 22 points of Set 4, before Washington State put together a 12-2 run for a 23-13 advantage. Four players tallied kills in the stretch, including three kills and two blocks by Martin. The Ducks scored three in a row to hold off the Cougars temporarily, but a Martin kill put WSU at set-point at 24-16. A service error clinched the 25-17 win and forced the decisive fifth set.

How it Happened: The Ducks answered an initial 7-0 run by the Cougars with a pair of 4-0 runs to pull the first set even, 11-11. Oregon scored five out of six to take its first lead, 17-16, but WSU responded with two straight and then traded points with the Ducks before scoring three of the final four to take the opening set, 25-22.

Oregon coach Matt Ulmer called a quick timeout in the second after a 2-0 WSU lead, and it seemed to pay off for the Ducks as they responded to move ahead, 8-4, behind three early Agost kills. Oregon led 19-16 when the Cougars scored four straight to pull ahead, but the Ducks responded by scoring six of the final nine points to even the match at intermission. Agost was huge in the set with eight kills, including two in the Ducks’ final three points.

Oregon led 7-4 in the third when the Cougars ripped off seven straight points to take an 11-8 lead, but the Ducks answered right back with eight straight points and then ran away with the set, finishing on an 18-5 run to take a 2-1 lead into the fourth. Oregon put down 18 kills in the set while hitting .450, with Agost, Sumeet Gill and Ronika Stone all enjoying big sets.

The fourth set was tied, 11-11, when WSU scored four straight and seven out of eight to take an 18-12 lead and force Oregon into taking both of its timeout. The Cougars used a flurry of scoring runs to control the set the rest of the way and force the Ducks into their second straight five-set match and the second in a row in the series between the two teams.

The Ducks used a 4-0 run in the fifth set to take a 10-8 lead, with Willow Johnson putting down four early kills in the frame, but WSU rallied back to pull even, 11-11. Oregon took leads of 12-11 and 13-12 with WSU fighting back to pull even both times, but Johnson ended her huge set and the match with back-to-back kills to secure the win and keep the Ducks’ win streak over the Cougars intact.

Who Stood Out: Agost’s 24 kills are the most by a Duck since September 2016, as the senior established a new career-high in kills for the second straight match while adding seven digs, two blocks and an ace. Johnson finished with 10 kills after her huge fifth set, as did Ronika Stone, who hit .280 on the night with seven digs, five blocks and two aces. Gill had eight kills on .500 hitting, and Lindsey Vander Weideset a career-high in digs with 21. Senior Maggie Scott notched her third double-double and second in as many matches with 26 assists and 14 digs, and libero Alex Hojnar dug 15 balls.

What it Means: Since being thrust into the six-rotation outside hitter role on Oct. 6 against No.2  Stanford, Agost has looked more comfortable with each match and is proving that she has the ability to take over matches for extended stretches at a time. Agost’s emergence has been huge for the Ducks considering the late hitting struggles of Vander Weide, who is able to take more of a secondary role offensively and focus on providing consistent passing. The win could prove to be a vital one for the Ducks, who now look to string together some wins as they return home for four straight road matches.

Quotable: Matt Ulmer, Head Coach
On the match…
“I’m just proud that we were able find a way to fight back. It was never pretty tonight, other than Taylor; I thought Taylor was phenomenal. I thought Lindsey responded great with her defense, we have to find a way to get her better on offense, but I asked everybody else, ‘If you’re not scoring, can you find a way to help us because Taylor is going to score enough for everybody,’ and I thought a lot of people stepped up and did some different things and that’s what we needed.”

“A really gutsy performance. It’s so hard to win on the road in the Pac-12 against good teams, and this is one of the best home-court advantages in the Pac-12. I feel like we’re always in five sets here, so I’m just proud of us. Good win.”

Taylor Agost, Senior
On her huge night…
“The outside position is amazing to me, I love volleyball so much and being able to be on the court the whole time now is so much fun. I think I’ve just really been rising to the occasion and I love it so much, and I think that’s the biggest reason I’ve been having some success is just that passion I have for this sport and that position.”

Notable: Agost also set a career-high for attack attempts for the second straight night, finishing with 63 … Oregon is now 3-1 this season in five-set matches … The Ducks won for the first time this season when hitting below .200 (.175) … Oregon held its opponent to under .200 hitting (.152) for the 10th time this year, and improved to 11-1 when leading in hitting percentage … Ulmer won his first challenge of the match in the first set, as video review showed a touch on a Vander Weide serve originally ruled out and the call was changed to an ace … Oregon is now 54-32-1 all-time against the Cougars.

Up Next: Oregon will return to Eugene for a stretch of four straight home matches, beginning next Friday (8 p.m., Pac-12 Networks) against Arizona. The Ducks will face Arizona State the next day, Saturday, Oct. 21, at 7 p.m.