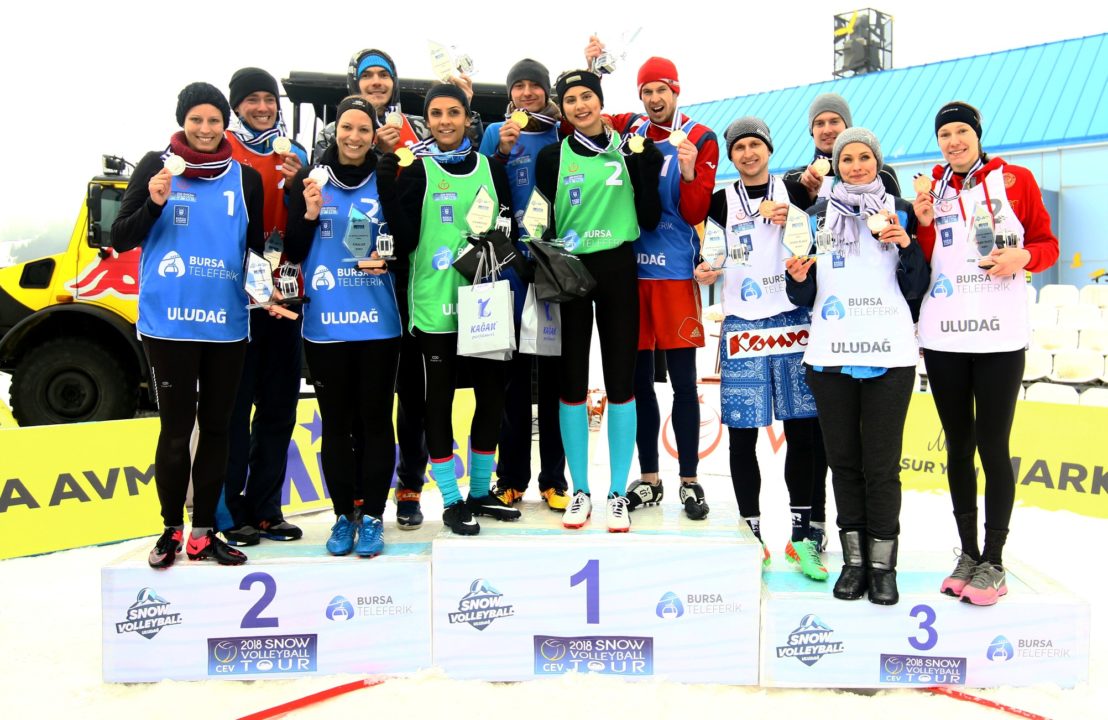 Amid pouring rain, lighting, thick fog, and strong winds which caused delays and interruptions, Russia was able to sweep the men’s podium (again) and Turkey won women’s gold at the Uludag stop of the 2018 CEV Snow Volleyball European Tour.

With heavy support from the home crowd, Turkish duo Bugra Eryildiz and Aleyna Vence swept Slovakian pair Silvia Poszmikova and Romana Jurenkova 3-0 in order to take the women’s gold medal. This is the second gold for the Turkish duo out of three participation on the Tour this year. Here is their post match reaction:

“It feels so good to win the gold medal again. We won gold at the previous Turkish stop in Erciyes, but winning in Bursa feels special because I love this city. We expect nothing but medals in the tournaments to come.” – Vence

“We played not only against our opponents, but also against the weather conditions. We played our game. The crowd was cheering for us and that motivated us a lot. We are a relatively new duo. We have been playing together for six months now and we expect more success in the future.” – Eryildiz

The Men’s competition once again saw the Russians dominate, as Ruslan Daianov and Taras Myskiv beat their compatriots Ruslan Bykanov and Maksim Hudyakov in a 3-2 (9-11, 11-9, 7-11, 11-7, 11-9) match for the record books. This was the third consecutive final on the European Tour between these two Russian pairs. Daianov is now the sole owner of 5 tour gold medals, while his partner Myskiv has won three. Here is their post-match reaction:

“It was a pretty close match. With ups and downs we managed to get the win and the gold medal. This is my second gold medal in Uludag and that makes me feel extra happy. We try to prepare for all kinds of conditions and we saw the benefit of it.” – Daianov

“It was a longer match than we hoped for. The weather affected our performance a lot. We tried to use it in our advantage. Especially in the last set we had some long plays that exhausted us a lot, but that kind of possibilities is why we train so hard and we are glad we did it. Thanks to all the fans for coming! Thanks to all the sponsors, our coaches and the federation for helping us!” – Myskiv