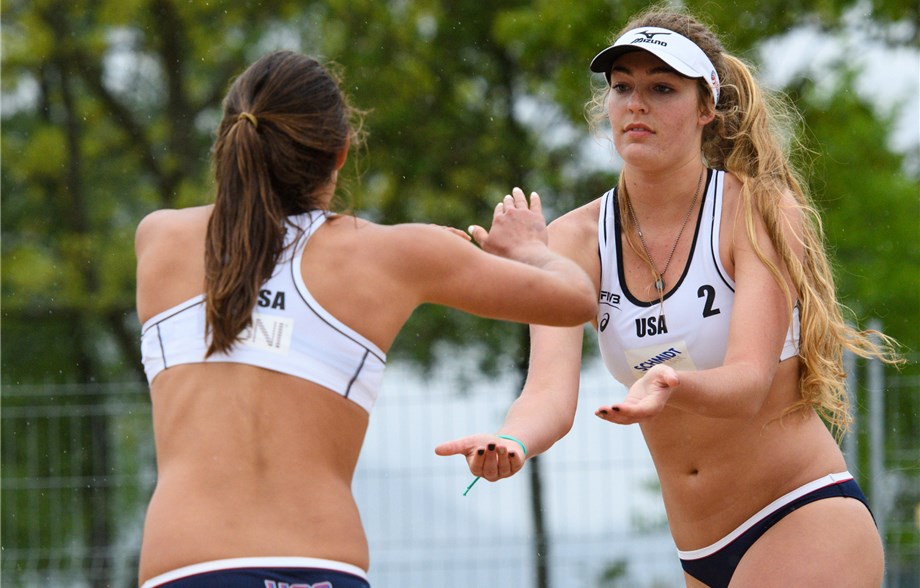 Americans Emily Sonny/Torrey Van Winden are through to the main draw at the Porec One Star after registering a pair of victories in qualifying on Thursday.  Current Photo via FIVB

Americans Emily Sonny/Torrey Van Winden are through to the main draw at the Porec One Star after registering a pair of victories in qualifying on Thursday.

The collegians – who each completed their sophomore seasons at Cal Poly this spring – edged Italy’s Alice Gradini/Claudia Puccinelli in tiebreak (21-17, 20-22, 15-13) and Hungary’s Dorottya Szabo/Dominika Hafra (21-13, 21-15) in their first ever FIVB World Tour event.

Also moving on to the main draw are:

Next up for the American pair is a 4:10 a.m. ET match in Pool C with Inna Makhno/Iryna Makhno of Ukraine.

Just one of the four second round matches went the distance, with Dorfler/Wiesmeyr holding on to top Dutch duo Emma Piersma/Julia Wouters 21-17, 17-21, 18-16.

In men’s action, the 14-team qualifying field was cut to four that moved on to Friday’s main draw.

Americans Adam Wienckowski/Jonathan Justice won their opening round match over Canada’s Dallas Keith/Jasmin Cull (21-11, 21-18) but were ousted from the competition in a 22-20, 21-13 decision to Austria’s Simon Baldauf/Alexander Huber.

Joining Baldauf/Huber in the main draw are:

Two of the 10 men’s qualifying matches went to tiebreak, with Lenc/Manas earning their spot in the main draw with a 24-22, 20-22, 15-12 win over Serbia’s Djordje Klasnic/Marko Plavsic.