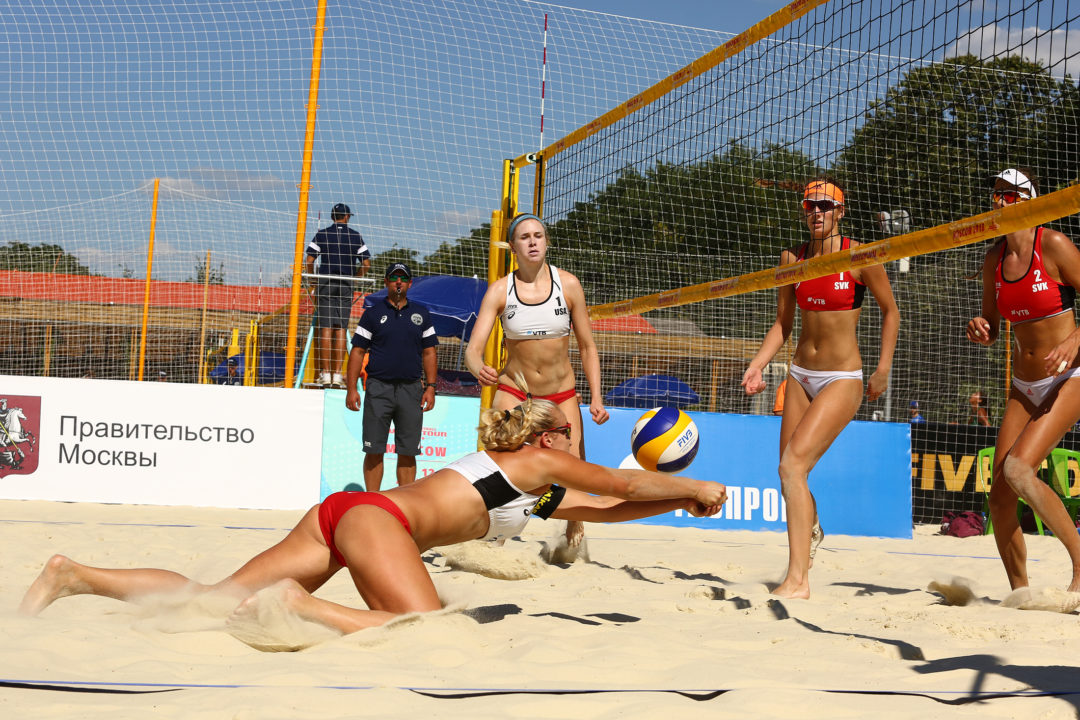 Two American pairs - April Ross/Alix Klineman and Summer Ross/Sara Hughes - are among the women's quarterfinalists at the Moscow Four Star and they are set to play one another on Saturday for a spot in the semifinals.  Current Photo via FIVB

Two American pairs are among the women’s quarterfinalists at the Moscow Four Star and they are set to play one another on Saturday for a spot in the semifinals.

No. 9 Summer Ross/Sara Hughes began their day with their final pool play match on Friday, topping Ukrainians Valentyna Davidova/Ievgeniia Shchypkova (21-15, 21-14) just to gain a spot in the knockout rounds. In Round 1, the pair rolled over Slovakia’s Andrea Strbova/Natalia Dubovcova (21-12, 21-12) and in Round 2 the team edged past Brazil’s Elize Maia/Maria Clara to make their way to the quarterfinals.

No. 5 April Ross/Alix Klineman had a much easier road after winning Pool E on Thursday, setting up a Round 2 matchup with Brazil’s Ana Patricia/Carol Horta, who the pair defeated 21-18, 21-18.

Rounding out the final eight are:

Maria Antonelli/Carol will play the Swiss pair, while the Italians will battled Agatha/Duda. The Germans and Russians will matchup in the last quarterfinal.

Laboureur/Sude took out top seeded Canadians Sarah Pavan/Melissa Humana-Paredes 21-14, 21-14 in Round 2 to claim a spot in the quarterfinals.

Larsen/Stockman were among the eight pairs that advanced to the second knockout round to play the pool winners. The duo defeated Germans Borger/Kozuch 21-17, 21-19 to move on.

Germany’s Bieneck/Schneider and Brazil’s Ana Patricia/Carol Horta rounded out the group of Round 1 winners.