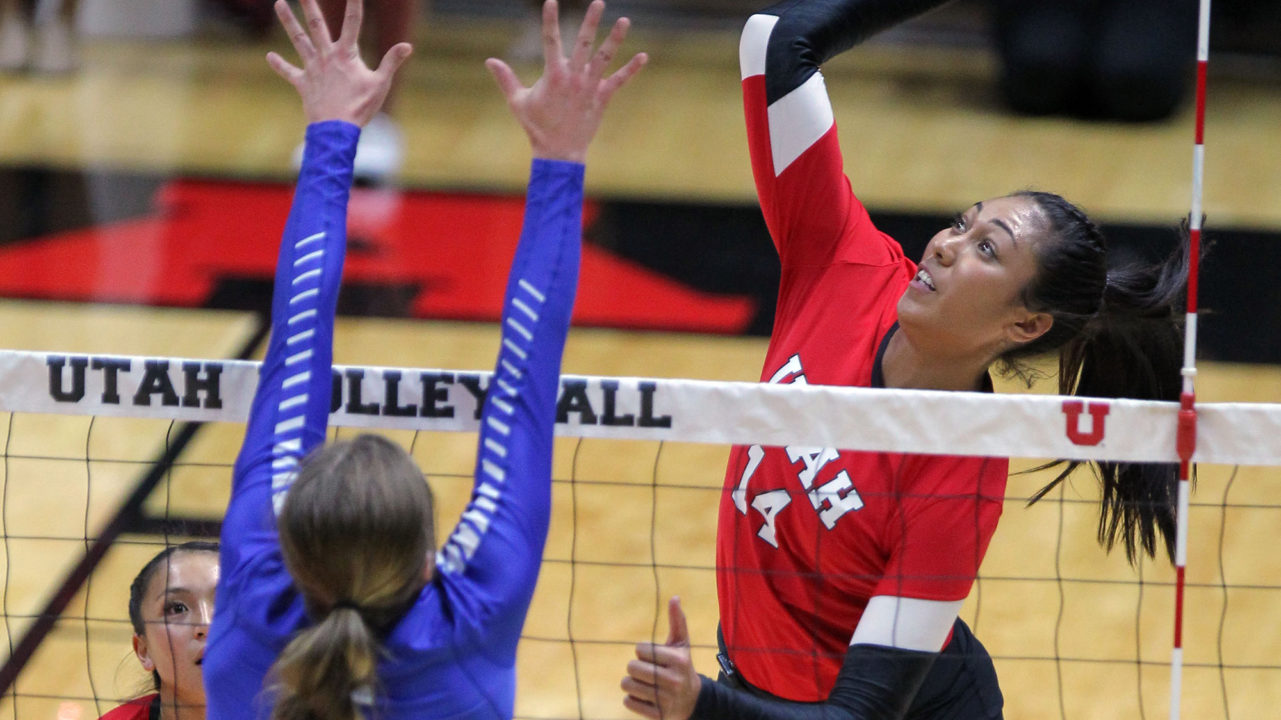 LOS ANGELES – Senior outside hitter Adora Anae had a season-best offensive outing and senior outside Carly Trueman joined the 1,000 kill club as No. 16 Utah held on to knock off No. 22 UCLA at home Friday.

Anae notched a season-best 29 kills and rounded out a double-double with a team-leading 19 digs and a team-best three aces. For her part, Trueman added six kills to boost her career tally to 1,002, making her just the 18th Ute player to join the elite group. Junior middle blocker Berkeley Oblad followed with five kills. Senior middle blocker Tawnee Luafalemana put up seven blocks and added four kills to aid the Utah effort, while freshman outside Kenzie Koerber notched six blocks, four putaways and two aces. Behind Anae in the backcourt were sophomore libero Brianna Doehrmann (18), sophomore setter Bailey Choy (10) and freshman outside Shannon Scully (10).

UCLA kicked off the match with a 4-0 run, but Utah answered with six of the next seven points, including two aces by Kenzie Koerber and a block and a kill by Oblad. The teams then tied eight times, the last at 13-all. The Bruins went up three at 16-13 and did not relinquish the edge, despite a tie at 17, thanks in part to a trio of Mosser kills. Later, trailing 20-18, Utah mounted a comeback, scoring five straight, two on Anae kills and two on stuffs by Luafalemana. UCLA used both of its timeouts during the rally. The teams split the final four points, with a hitting error putting Utah on the hill at 24-21 and an Anae putaway clinching the 25-22 win. The teams hit at identical .263 clips, but Utah managed two aces and three blocks.

The teams played to an 8-all tie to start Set 2. UCLA managed a two-point edge three times after that, last at 12-10 as May, Gates and Buechler notched kills. The Utes grabbed the lead at 15-13 with a 5-1 run, including three Anae putaways and a solo stuff by Trueman. A block by Luafalemana and Koerber put Utah up three at 17-14. The teams split the next eight points. Down 21-18, UCLA rallied to tied the score at 21 with two Ute miscues and a solo block by Rogers. After ties at 22 and 23, a block by Rogers and May gave the Bruins a shot at the set at 24-23. A service error kept the stanza going, but Buechler would not be denied, knotting up the match at 1-1 with back-to-back kills to clinch the 26-24 comeback win. The set featured 14 ties and five lead changes.

Utah cruised to a 5-1 lead in Set 3, with help from two blocks and a Doehrmann ace. UCLA caught up, tying the score at 8 and 9 before vaulting ahead by four at 13-9. A 5-0 run, including three Utah miscues, gave the Bruins the advantage. The Utes countered with eight of the next 11 points, turning the deficit into a one-point lead at 17-16. Four UCLA errors another Doehrmann ace and a solo stuff by Luafalemana aided the surge. A kill and a block by Gates put the Bruins up 19-18 and the teams would then trade points over the six points leading to a 22-21 UCLA edge. Utah grabbed the first set-point try at 24-22 with three straight points incluign a Scully ace and Anae kill. A Buechler kill and a stuff by May and Gates knotted it up at 24. The Utes had two more set point attempts at 25-24 and 26-25, but UCLA thwarted each and earned one of its own at 27-26 on a Mosser putaway. Anae put Utah on top 28-27 with a kill and an ace. Gates downed a kill after a Bruin break to tie it up at 28. A service error and kill by Lauga Gauta finally wrapped up the 30-28 Utah win.

The Utes carried the momentum into Set 4, starting off with a 4-0 run, including three points by Anae, two kills and a block. The teams were even at 5-all, but an Oblad kill and Anae ace gave Utah a slight edge at 7-5. Down two again at 10-8, UCLA scored four straight, including a kill and block by Buechler. Trailing 14-12, Utah managed a four-point run of its own, guided by a pair of blocks by Dani Barton. The Bruins pulled into a tie at 16 and 17, but couldn’t hold off a final final 8-2 Ute run. Five UCLA errors buoyed the run, including the final point, which came on a service error.

The win snapped a two-match losing streak for the Utes and ended a three-match UCLA win streak.

Anae registered eight kills in the first set to lead the Utes to a 25-22 win. Tied 17-17, UCLA scored three of the next four points to take the lead late in the set 20-18, but the Utes recorded a block to end the run. The block from Tawnee Luafalemana and Carly Trueman sparked a Utah 5-0 run which would force the Bruins to call timeout, trailing 23-20. Leading 24-22, Utah would clinch the set win from Anae’s eighth kill of the set.

UCLA evened the match 1-1 before heading into intermission after taking the second set 26-24. The Utes fell behind 12-10, but would score seven of the next nine points to go ahead 17-14. An Anae kill held the Ute lead at 21-18, but three straight points from the Bruins squared the set at 21-all. Utah fought off UCLA’s first set point to tie the set at 24-24, but two consecutive kills from Reily Buechler gave the Bruins the frame.

Utah jumped out to a 5-1 lead early in the third set, but later the Utes found themselves trailing 13-9 following a UCLA 8-1 run. Trailing 16-13, Utah scored four straight to regain the lead at 17-16. Both teams went back-and-forth until it was tied 22-22 and Shannon Scully recorded a service ace, which was followed by a block by Luafalemana to give the Utes set point, leading 24-22, but UCLA scored two straight to stay alive. Tied 28-28, the Utes would eventually close out the frame with a kill from Lauga Gauta to take the set 30-28 and take a 2-1 lead in the match.

Utah led 10-8 early in the fourth set, but UCLA put together a 6-2 run to take the lead 14-12. Utah then responded with four straight points which led to a UCLA timeout. Tied at 17-17, Utah went on a 3-0 run to force the Bruins to call its final timeout. Out of the timeout, UCLA recorded a kill, but it was all Utah as the Utes scored five straight points to win the match, and close out the fourth set on an 8-1 run. Utah registered a hitting percentage of .200 in the frame, while limiting UCLA to just a .095 clip.

Along with 29 kills on the evening, Anae notched her eighth straight double-double after tallying a team-high 19 digs. Anae also recorded three service aces in the win.

Carly Trueman collected her 1,000th career kill during the match against the Bruins, becoming just the 18th player in school history to become a member of the 1,000-kill club. Trueman finished the night with 6 kills.

On Senior Night, senior Reily Buechler led the Bruins with 22 kills to go with eight digs, while senior Sarah Sponcil had a double-double with 51 assists and 15 digs, adding four blocks, but the 18th-ranked Bruins dropped a four-set decision to #15 Utah on Friday at the John Wooden Center in a match featuring 43 ties and 18 lead changes. Set scores were 22-25, 26-24, 28-30, 19-25.

UCLA (16-9, 9-7 Pac-12) scored the first four points of the match on kills by Buechler and Gates and two Utah (19-8, 10-6 Pac-12) errors, extending its lead to 5-1 after another Buechler kill. Four would be the Bruins’ largest lead of the set. After the lead changed hands a few times, the Bruins, trailing 13-12, scored four straight on back-to-back Buechler kills, one by Mosser and a Utah attack error. UCLA led by a pair as late as 20-18 before Utah went on a 7-2 run to close out the opening set and win it 25-22. Mosser was error-free with six kills in 10 attempts, Buechler also had six kills and Gates was error-free with three in seven swings. Muno added six digs. The Bruins and the Utes each hit .263.

Neither team led by more than three in a second set featuring 13 ties and five lead changes. Down by three at 21-18, the Bruins scored three in a row on two Utah errors and a solo block by Rogers. UCLA was still down by one at 23-22, but another Rogers solo stuff and a combo block by Rogers and freshman Mac May gave the Bruins a set point. Utah saved the first try, but consecutive Buechler kills closed out a 26-24 victory. Buechler had six kills with no miscues in 14 attempts, while Gates and Mosser each posted three kills. Simo added five digs. The Bruins out-hit the Utes .196 to .176.

Set three went into overtime with 14 ties and six lead changes. Utah raced out to a 5-1 lead, but saw UCLA go on an 8-2 run to take a four-point edge of its own. Down 8-5, five Ute errors, solo blocks by Sponcil and Rogers and a Mosser kill put the Bruins up 13-9. With UCLA up 22-21, three in a row for Utah gave the visitors a pair of set points, but a Buechler kill and a May/Gates block evened things at 24. Another Buechler kill saved set point number three to tie it at 25 and kills by Buechler and Mosser then gave UCLA a set point at 27-26. Utah recorded the next two, but UCLA saved a fifth set point on a Gates kill to even the score at 28. However, Utah got the next pair and won the pivotal third 30-28. Buechler and Mosser each had six kills in the third, Gates was 3-for-3 in attempts, Muno added nine digs and Sponcil posted five digs, as the Bruins out-hit the Utes .191 to .023.

UCLA begins a four-match road swing next Thursday, Nov. 16 at Stanford at 8 p.m. The match will be televised on Pac-12 Networks