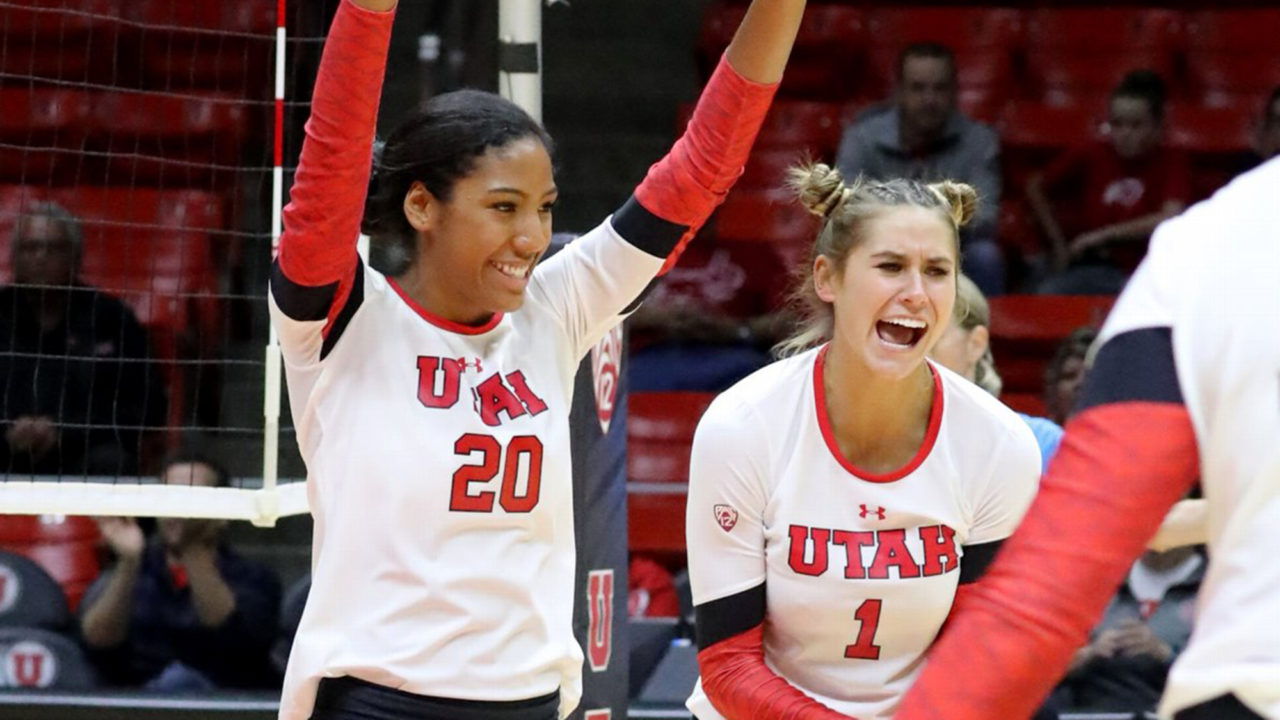 The #17 Utah Utes overcame an early setback to defeat the visiting Arizona Wildcats in four before a crowd of 2,763 senior night fans on Saturday night in Salt Lake City, Utah.

For the Wildcats, sophomore middle Devyn Cross had eight kills to go with a career-high nine blocks, and freshman outside Elizabeth Shelton added eight kills. Junior setter Mackenzie Hernandez, playing in her second match as a replacement for injured starter Julia Patterson, recorded her first career double-double with 30 assists and 12 digs.

In the first set, Utah hit just .023 and the Wildcats capitalized on the home team’s scoring struggles to win 25-20. The Utes bounced back in the second frame, hitting .483 on their way to a 25-15 win. The third and fourth sets were all Utah, and they won both sets by the same 25-15 score, with the final point coming on Luafalemana’s 13th kill of the night.

Next up, Utah goes on the road for a Wednesday tilt against #3 Stanford, while Arizona travels to Seattle to play #8 Washington, also on Wednesday.

Utah struggled to find an offensive rhythm in the first set as the Utes would hit just .023 and drop the set 25-20. Utah fell behind early in the first set and trailed Arizona by six midway through the frame, 15-9. Utah went on a 5-1 run to trail just 16-14, but Arizona pushed its lead to back to five points at 20-15. The Utes managed to put together a 5-1 run to force an Arizona timeout with the Wildcat lead cut to 21-20, but the rally wasn’t enough as Arizona scored four straight points to take the set 25-20.

The Ute offense turned things around in the second set as the Utes connected on 16 kills while having just two hitting errors to record a .483 hitting percentage.  Utah and Arizona traded points to open the frame until Utah trailed 8-7, and the Utes managed to put together a 9-1 run to take the lead 16-9. Utah rolled the rest of the set and closed out the frame scoring four straight to take the second set 25-15. Tawnee Luafalemana totaled four blocks and three kills during the set, while Berkeley Oblad added in six kills for the Utes.

Utah continued its momentum out of intermission, scoring the first four points of the third set. Arizona scored the next two points after calling timeout, but a 9-2 Utah run gave the Utes a commanding lead at 13-4. Leading 19-13, the Utes closed out the third set scoring six of the final eight points to take the fourth set 25-15.

Utah and Arizona traded points to start the fourth set until Utah went on a 4-1 run to lead 15-10 midway through the frame. Still leading the Wildcats at 17-13, a block from Oblad began a 4-0 run to push the lead to 21-13. After an Arizona sideout, Utah rolled to a fourth set win after scoring four of the final five points in the set. A kill from Luafalemana capped off the fourth set 25-15 and helped the Utes take the match 3-1.

Luafalemana, Oblad, and Kenzie Koerber led the charge at the net, each totaling six blocks.

Utah completes its last week of conference play beginning next Wednesday against Stanford. Following the contest at Stanford, the Utes will travel to Colorado for the final match of Pac-12 play.

Utah Defeats Arizona Despite a Career Night from Cross

Devyn Cross had a career-high nine blocks and tied her season high with eight kills in the match. She was in on nine of UA’s 12 blocks on the night.

Those 12 blocks to go along with 63 digs represented a solid defensive effort for UA, but its offense managed to hit just .075 in the loss.

Cross and Elizabeth Shelton led the way with eight kills apiece while freshmen Candice Denny and Paige Whipple had seven. Shelton also had five blocks in the match.

Setter Mackenzie Hernandez, in her second match filling in for injured starter Julia Patterson, posted her first career double-double in a UA uniform. She had 30 assists and 12 digs.

Hernandez was one of three Wildcats to post double-digit digs. Whipple led the team with 15 while Makenna Martin had 14.

Four blocks and 20 digs helped Arizona limit Utah to .023 hitting in the first set, as the Cats grabbed the opener, 25-20. Candice Denny had a match-high five kills.

The Utes awoke from their hitting woes in set one, hitting .483 on their way to a 25-15 victory in the second set.

Utah took the lead in the match with a 25-15 victory in the third.

The Utes won their third straight set 25-15 to close out Arizona in the fourth.

With the loss, UA fell to 10-17, 4-14 Pac-12 while the 17th-ranked Utes improved to 21-8, 12-6 Pac-12. Arizona now heads into the final week of the 2017 season. UA will face Washington in Seattle on Wednesday before returning home for senior day. McKenzie Jacobson, Jade Turner and Kimberly Gutierrez will be honored in Arizona’s match vs. Arizona State on Saturday.