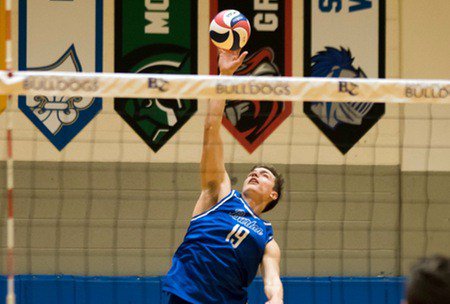 Mandilaris, a sophomore from Chalkida, Greece, finished second in the league in kills (370), kills per set (4.02), while ranking fourth in hitting percentage (.313). He also garnered conference player of the week honors twice during the regular season.

Cenzual, a native of Cipolletti, Argentina, appeared in 26 matches and 85 sets for the Saints. He tallied 240 kills, eight assists, 38 service aces, 153 digs and 55 total blocks (11 solos and 44 assists). His stats ranked in the top-10 in the conference in total kills, kills per set, service aces per set and total service aces.

Booher, for the second straight year, was selected conference Coach of the Year after leading the Tornado to a share of its second straight Conference Carolinas regular season title. During the 2018 season, his squad only dropped six sets in conference play, four coming to co-champion Barton, as King finished the season with a conference mark of 15-1. King is 21-5 and has recorded two winning streaks of at least nine matches, including a 10-match streak entering the Conference Carolinas Championship semifinal matches. Earlier this season, the Tornado won a program record 26 straight sets.

Offensive Player of the Year

Defensive Player of the Year

Freshman of the Year