Anzani Strengthens Modena in the Middle 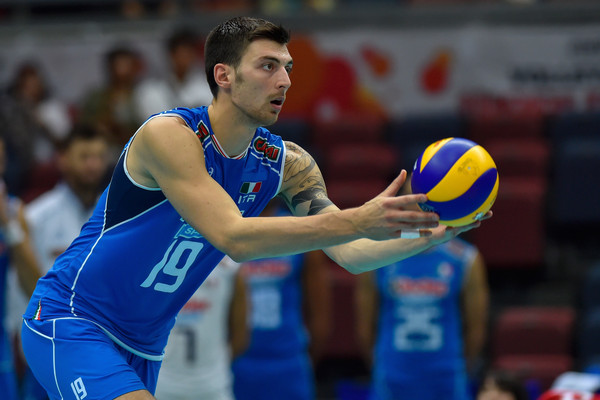 Simone Anzani is heading to Azimut Modena to team up with Max Holt in the middle. This is the latest addition to the roster of Modena as they look to bounce back from a disappointing 2018 campaign.  Archive Photo via FIVB

Azimut Modena secured another important reinforcement to their lineup as they look to bounce back and take the Italian SuperLega title. After securing the services of Ivan Zaytsev at opposite and a new setter in Micah Christenson, they just signed Simone Anzani. His departure from Sir Sicoma Colussi Perugia after just winning the championship provides a pair of formidable options for Christenson. Anzani will be playing opposite of Max Holt, who decided to remain in Modena after a tumultuous season. Modena is looking to improve upon their 3rd place finish in the regular season and semifinal exit from the playoffs.

Simone Anzani, a 26 year-old Italian native, has spent most of his professional career with BluVolley Verona.  He played in Verona from 2013 to 2017. Anzani was instrumental in the achieving the club’s highest finish in the regular season in 2016 when they finished 4th. This past season he started in the middle for Perugia as they won the club’s first major domestic titles in the Coppa Italia and the SuperLega.

Anzani has been making appearances in worldwide competitions for the Italian National Team since 2014. He had 40 appearances for Italy to his credit coming into this summer. He was a bronze medalist at the 2014 World League and was a part of the squad which played in the World Championships that same year. Anzani also took part in the 2015 World Cup and won a silver medal. He was not named to the Olympic Squad in 2016.  After the first weekend of play in the Volleyball Nations League he is the 3rd-leading scorer with 21 points on 18 kills and 3 blocks. Anzani has not committed an attack error thus far and has posted an attack percentage of 90%.