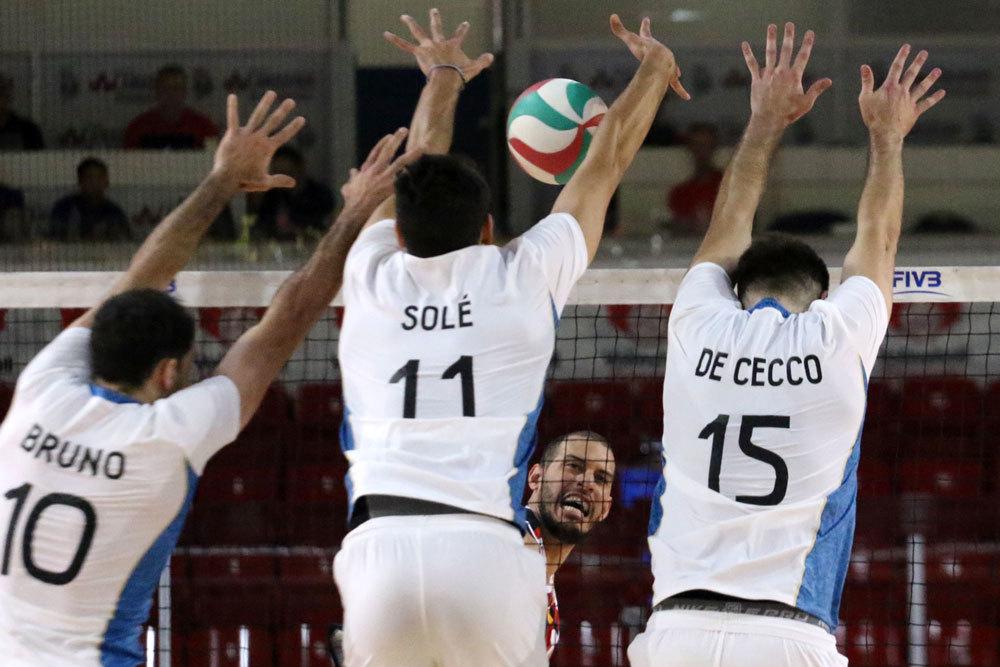 Argentina remained undefeated in Pool B play with a sweep of Venezuela, while Puerto Rico earned its first win of the tournament with a 3-0 victory over the host Canadians on Wednesday. Current Photo via NORCECA

Puerto Rico takes on Venezuela on Thursday, while Argentina looks to remain undefeated and sew up a semifinal berth against Canada.

Thirty Venezuelan miscues helped Argentina to a sweep, a 2-0 mark in Pan Am Cup play and at least a spot in the quarterfinals.

“We changed a lot of players today to give everyone a chance to play a game,” Argentine coach Julio Velasco said. “So, it became difficult in the third set because some of the players lost their concentration, but they cooperated and we won 3-0 in the end. We need to do some things without thinking so much, and other things we need to still think to do well. That is what this match told us, so it’s good to learn something from this experience.”

Bruno Lima paced the Argentines with 13 points, tallying 12 kills and a block. Sebastian Sole and Martin Ramos followed with nine and eight points respectively. Sole put down eight kills and a block, while Ramos managed seven putaways and a stuff. Pablo Crer put up a team-best two blocks as part of a six-point effort.

“This game against Argentina was really important,” Venezuelan coach Ronald Sarty said. “They came with their A Team so it was a tough challenge but it gave us confidence for the future to win a set or a game. Tonight, we could have won a set, we just missed some definition especially with reception. I’m really happy with the way we played overall.”

Puerto Rico served up seven aces and did not allow any in a sweep of host Canada for its first win of the tournament.

In addition to the 7-0 advantage from the service line, the Puerto Ricans edged their foe 37-32 in kills and 7-6 in blocks.

“We controlled our serving pretty well,” Puerto Rican captain Edgardo Goas said. “Yesterday we struggled with our reception and today we did really well in that aspect. Pablo Guzman came into the starting line-up and did a great job, and overall it was a good team effort.  I think a lot of the teams are pretty evenly matched and a lot of the teams have great serving, so we have to be ready for that at this tournament.”

“We didn’t play well and they were better than us in every aspect of the game,” Canadian coach Larry McKay said.  “The score is pretty indicative of the better team tonight.”