Arkansas Battles From Two Sets Down to Beat Georgia 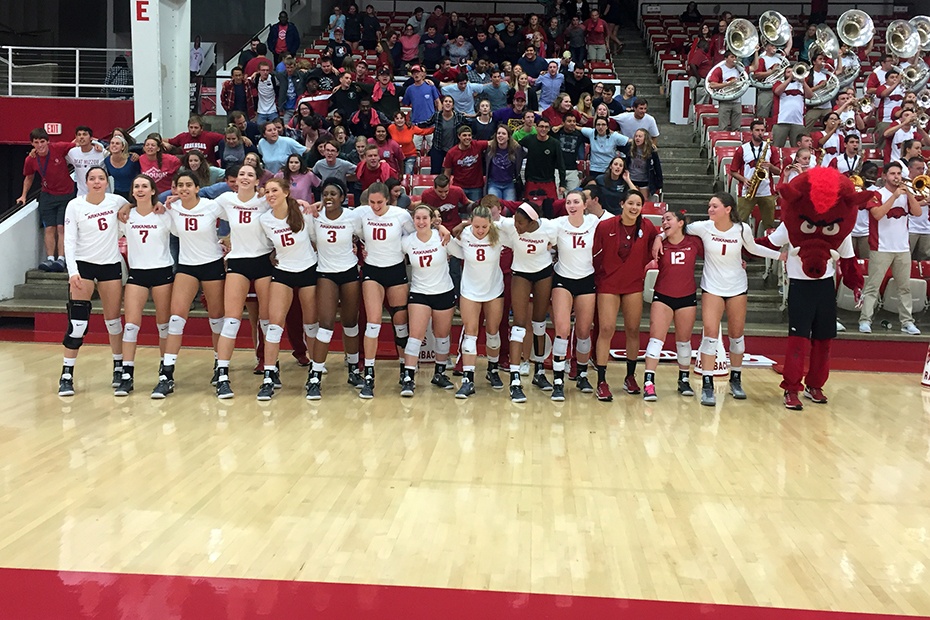 Arkansas faced three match points in the third set against Georgia, but hung tough to win the match in five and get their third SEC victory. Current Photo via Arkansas Athletics

A crowd of 600 gathered in Barnhill Arena to watch an absolute thriller between the Arkansas Razorbacks and the Georgia Bulldogs. The Dawgs got out to a two set lead, before the home team Arkansas saved three match points in the third set, and won in five.

Arkansas was led on offense by Danielle Harbin, who had a career-high 27 kills. Barbara Dapic and Breana Jones also registered double-digit kills, with 12 and 11, respectively. Ana Sofia Jusino recorded 7 blocks in the match, followed closely by Harbin, who had 6. Okiana Valle tallied 28 digs, while Harbin picked up a double-double, adding 12 digs to her 27 kills.

Rachel Rippee was also an impact player for Arkansas, recording 45 assists and an astounding 6 service aces.

Georgia matched Arkansas in team kills with 57, and outblocked them 14-11, but they could not get the win. The Bulldogs have had a tough go this season in SEC play, winning just one match.

On offense, Amanda Dachs put down 16 kills, and Maddie Lobenstein was just one behind, with 15. Meghan Donovan had a match-high 9 blocks, in addition to her team-leading 44 assists and 4 aces. Cassidy Anderson had the most digs for the Dawgs with 14.

Up next, Arkansas will travel to play Alabama on Sunday, November 6th. Georgia plays this Wednesday, November 2nd, against the top team in the SEC, Florida.

FAYETTEVILLE, Ark. – For the 13th time since 2000, the University of Arkansas volleyball team rallied from a 0-2 match deficit and defeated Georgia Sunday afternoon at Barnhill Arena. Danielle Harbin put down a career-high 27 kills while libero Okiana Valle matched her season high with 28 digs. The Razorbacks saved three match points in the third set before coming away with the five-set victory.

Harbin completed her third double-double—and second in as many matches—with 12 digs to go along with a season-high six blocks. Sunday’s performance marked her sixth 20-kill outing of the season, four of which have come during SEC play. She was one of three Razorbacks in double figures along with Barbara Dapic and Breana Jones who posted 12 and 11 kills, respectively. With her seventh kill, Dapic became the 33rd player in program history to record 500 career kills.

In the decisive fifth set, the team battled to nine ties and five lead changes. Georgia (13-10, 1-9 SEC) led 8-6 at the media timeout but the Razorbacks won the next three points including a successful challenge on a kill by Breana Jones that was initially called out. With the score tied at 12-all, Rachel Rippee stepped to the service line where she finished off the victory with a run that featured two aces including the final ball that trickled over the net to seal the come-from-behind win.

Rippee finished the match with a career-high six service aces to go along with 45 assists and eight digs. As a team, Arkansas registered a season-high 10 aces on its way to beat the Bulldogs for the seventh-consecutive time and improving to 23-9 in the all-time series. The teams will face each other for a second time on Nov. 18 on Georgia’s home floor in Athens.

Having dropped the first two sets, Arkansas (5-18, 3-8 SEC) trailed by as many as seven points in the third. The visitors led 18-11 before the Razorbacks won nine of the next 12 points to pull to within one on an ace by Adrien Wohlschlaeger. Having already saved two match points, the home team was down 25-24 when it turned to Dapic who put down the final three kills of the set to extend the match.

The teams traded points throughout the first half of the fourth set before Harbin and Jusino teamed up for a tandem block to give Arkansas a 12-10 lead. The Razorbacks’ advantage was 20-16 when Georgia rattled off five-straight points to take a lead. The score went on to be tied at 21, 22 and 23 before Dapic came through with back-to-back kills to push Arkansas to its third five setter of the season.

With wins in the final two matches of their two-week home stand, the Razorbacks return to action next Sunday, Nov. 6, for a road contest at Alabama. First serve of that match is scheduled for 1 p.m. (CT) on the SEC Network. Arkansas’ next home match is Wednesday, Nov. 9 against No. 22 Kentucky.

“There is no doubt that we are playing better volleyball each time we step on the court, but we are falling just short to finish,” said head coach Lizzy Stemke. “That is something that we will be putting all our efforts into next week.”

Offensively, Amanda Dachs put up a team-best 16 kills followed by Maddie Lobenstein’s 15. Meghan Donovan put up personal-best numbers with four aces and nine blocks while the freshman dished out 44 assists. Cassidy Anderson collected 14 digs along with a pair of aces.

Georgia had to battle in different ways in the first two sets, but pulled it out to go up 2-0 at the break. In the first set, the Bulldogs were down 13-3 after an Arkansas run, but used a 10-1 spree of their own down the stretch to win 25-21. In the next frame, it was back-and-forth between the squads, as no team led by more than four points. Behind five blocks apiece from Donovan and Desiree McCray, Georgia took the 26-24 victory.

The games continued to stay tight out of the locker room. Georgia looked to be on its way to closing it out with a 24-22 lead in the third. Late miscues hurt the Bulldogs, as Arkansas forced another set with a 27-25 win. In the fourth, Georgia knotted it at points 22 and 23, but Arkansas closed it out 25-23.

The Bulldogs held the better hitting percentage in the fifth set at .211, but two service errors and two reception errors had Arkansas capitalizing en route to a 15-12 win.

It’s a quick turnaround for the Bulldogs next, as Georgia hosts No. 9 Florida on Wednesday. It’s a white out at the Ramsey Center, as free wings will be handed out to students and the first 500 fans receive T-shirts. The game begins at 9 p.m. ET and will air nationally on ESPNU.