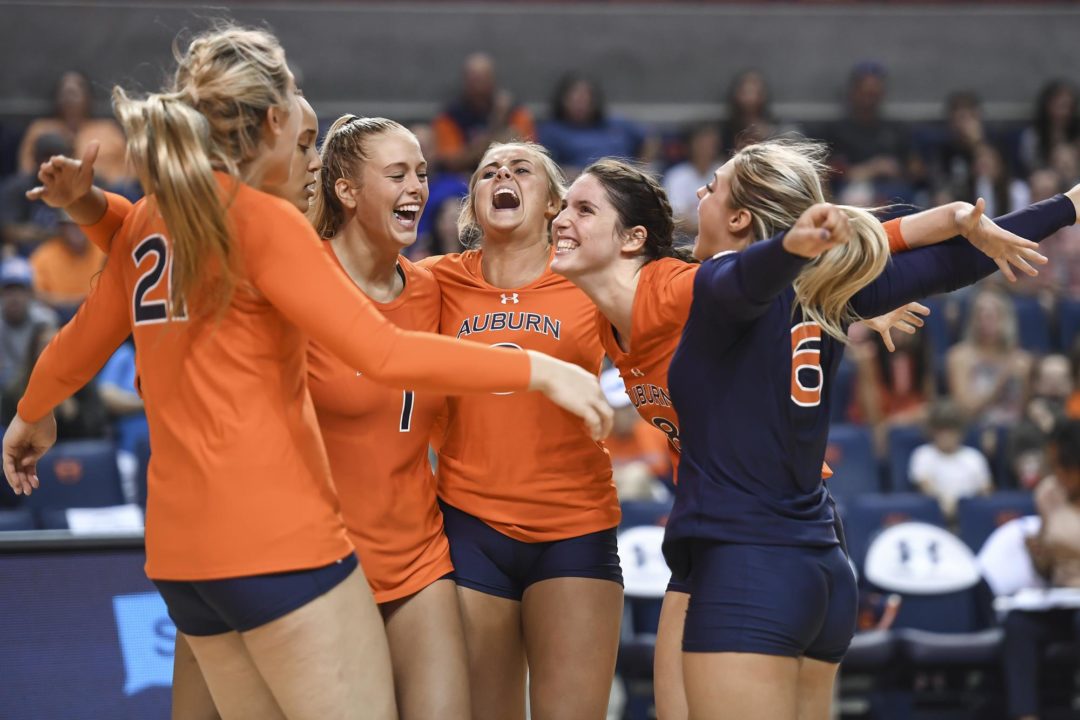 Florida State owned the net both offensively and defensively, outdoing the Tigers in hitting efficiency (.226 to .207), kills (61-57) and blocks (14-7), but fell short on the scoreboard. Auburn boasted a 5-1 edge in aces.

Both teams struggled in Set 2, with Auburn outhitting Florida State .061 to .041 despite committing 11 hitting errors. The Seminoles righted the ship in Set 3, hitting at a .486 clip with just one miscue in the 25-16 win. FSU also outhit Auburn .289 to .256 in the final stanza, but could not send the match to a decisive fifth set.

Brenna McIlroy downed 20 kills and added 14 digs and three aces to lead the Tigers. Gwyn Jones chipped in 11 putaways. Four other players notched five or more kills, including Tatum Shipes, who posted seven kills at a .750 clip (7-1-8) and Shaina White, who downed six kills and a team-best four blocks.

Four Auburn players managed double-digit dig tallies, including Bella Rosenthall‘s match-best 20 and Mica Allison‘s 13 to round out a double-double with 47 assists. Karis Beasley rounded out the group with 16 saves.

Christina Ambrose (18), Payton Caffrey (17) and Taryn Knuth (13) paced the Seminoles offensively. Knuth hit at a team-best .393 clip and rounded out a double-double with 10 blocks. Caffrey wrapped up a double-double of her own with 11 digs.

The teams tied 11 times in Set 1, last at 20-all, before two McIlroy kills and two FSU miscues helped Auburn to a final 5-0 run and the win. Neither team led by more than three in the stanza.

After leading 6-3 early in Set 2, FSU watched Auburn rattled off 10 of the next 13 points to vault ahead 13-9. The Seminoles responded with four straight points to knot it up at 13. Down 18-15, Florida State called timeout and notched a 5-1 run out of the break to go ahead 20-19. Auburn fought back to earn a set point try at 24-22 with back to back putaways by McIlroy. FSU had a chance at 26-24. A Gwyn Jones kill thwarted that and two Seminole errors set up a final kill by Taylor Rowland to give Auburn the 28-26 win on their fifth set-point attempt.

Florida State used a 9-0 midset run to go up 14-6 in Set 3 and never looked back. Another 4-0 run, including three Ambrose kills, made it an 11-point game at 20-9. Ambrose ended the stanza with her sixth kill of the set.

Auburn went up 4-1 to start Set 3 with help from two McIlroy kills and two FSU miscues. The Seminoles tied it up at 7-all and went on to a 16-12 lead. Trailing 22-19, the Tigers began a final push, scoring six of the last seven to secure the win. Facing a 23-21 deficit, White turned in two kills and Shipes added a kill and a block to steal away the win.