Italy Continues Dominating Pool A Run With Win Against The Dominicans 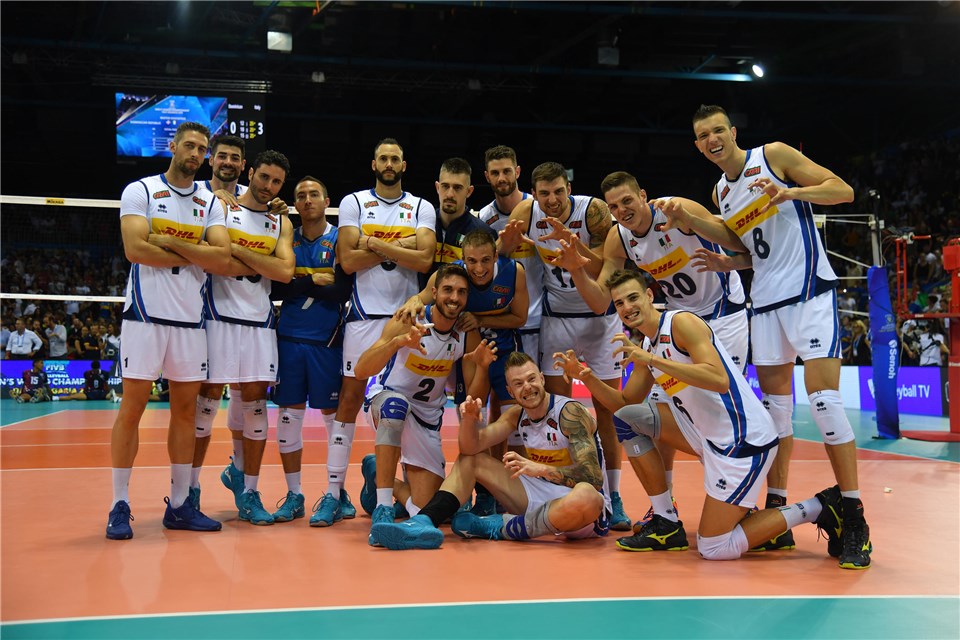 Italy had no trouble whatsoever to extend its Pool A record to 4-0 against the much weaker Dominican squad, in what was one of the most one-sided games of the tournament so far. Meanwhile, Belgium beat Japan for the first time in a world-level senior competition. Here is the day’s recap:

In one of the most lopsided games of the tournament so far, hosts Italy defeated the weak Dominicans squad 3-0 in front of almost 8000 home supporters. The Italian squad dominated the game in all of its facets, outblocking its opponent 8-2, scoring 11 aces to 1, and hitting 61% to 38%. Osmany Juantorena led the way with 17 points while Henry Capellan scored 12 points in the losing effort.

DR’s coach Josè Gutierrez: “First of all I wish to congratulate Italy and wish it all the luck for the second round. We had an experience here. Some of my kids had only seen the Italian stars on tv before, so it was not easy to fight face to face. We are still working towards our future.”

DR’s captain Antonio Lopez: “We did our best, we improved every day. We are here for this. I’m happy with some spikes of mine which succeeded against The Italian block”.

Italy’s head coach Gianlorenzo Blengini: “Every single match is important for our path in the tournament, not just for Pool A. Some matches are technically harder than others, however all of them give us the chance to gain the same three points. Under this point of view we played a great game”.

Italy’s Simone Giannelli: “Fourth victory in a row, that’s very good. After a match like yesterday’s, there could be a loss of mental stamina, however we controlled the game. On Tuesday we are going to play with Slovenia and it’s important to win as many points as possible for the second phase”.

Check the highlights of a solid win for Italy 🇮🇹 as they defeated Dominican Republic 🇩🇴 0-3 (12-25, 18-25, 15-25) for their 4th win in a row in #FIVBMensWCH Pool A! #volleyball #volleyballWCHs @Federvolley pic.twitter.com/dos1TkpG1n

The Belgium squad overcame a horrid 14-25 first set defeat to come back and hand Japan a 3-1 defeat, much largely in thanks to it stingy defensive game. Bram Dries led the way with 18 points and was 1 of 4 Belgians in double figures, while Yuji Nishida scored 20 points in the losing effort. Belgium finished the game with a 12-5 blocking edge against its opponent.

Belgium’s coach Andrea Anastasi: “It is a very important victory because it opens the door to Bologna, and that was our goal. We had a very complicated series of matches, whilst tomorrow the last one versus the Dominican Republic should be quite affordable. My players started this match very nervous after yesterday’s intense game with Slovenia, but once they relaxed, they delivered a good team performance.”

Belgium’s captain Sam Deroo: “After yesterday’s tough game, at the beginning we did not find the energy to answer to Japan’s great service in the first set. After that, we found a way to react and showed great fighting spirit. We played two long and tough matches in two days, physically very intense, and it was important to take these three points.”

Japan’s head coach Yuichi Nakagaichi: “We played an excellent first set with great service, then the team went down and we did not have enough stamina.”

Japan’s captain Masahiro Yanagida: “After the first set it seemed to be an easy game for us, but later Belgium improved while the quality of our performance went down. The day after tomorrow we have to win versus Argentina.”

Quick reactions in this rally, but it's Belgium's 🇧🇪 #1 Bram Van Den Dries (@BramVdD02) with the big hit off of the Japan 🇯🇵 block to finish it! #FIVBMensWCH #volleyball #volleyballWCHs @belreddragons pic.twitter.com/DkTI1aSipq

Japan's 🇯🇵 #11 Yuji Nishida starts & ends this one! Great serve that gets Belgium 🇧🇪 off-balance and a huge spike from the back to finish! Wow! #FIVBMensWCH #volleyball #volleyballWCHs @JPN_Volleyball pic.twitter.com/TX4U71btm6