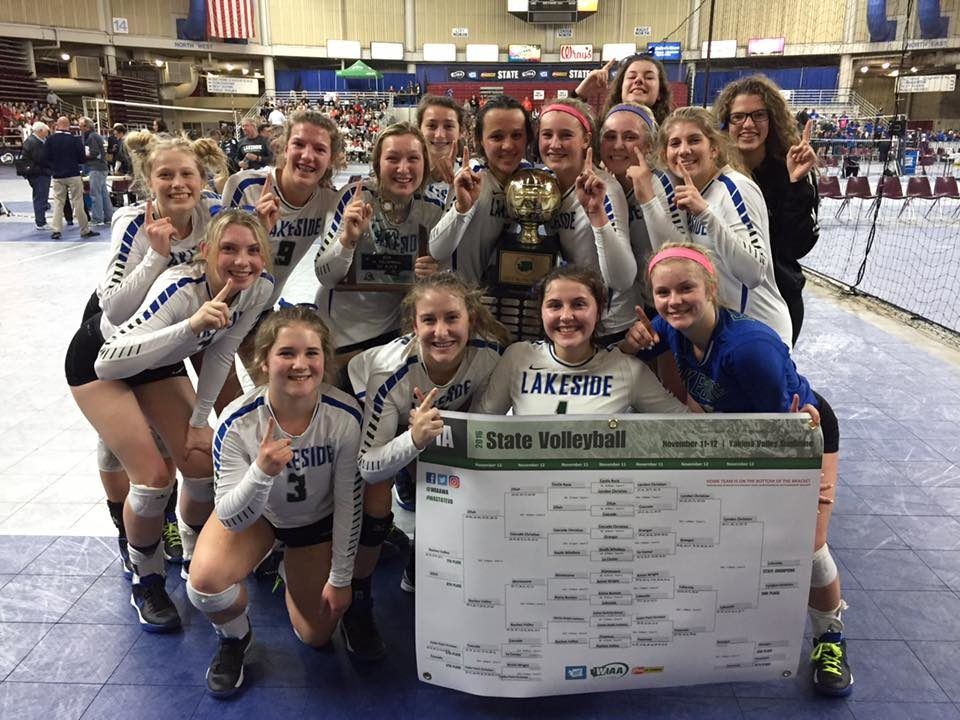 Six schools have won division titles in the Washington state championship volleyball tournament. Full brackets for each division and statistics for each school can be found here.

Oakesdale won their second consecutive 1B state championship on November 12th when they defeated Pomeroy in the finals for the second year in a row.

Coach Brandy Brown came back this season after leading the Nighthawks to titles from 2011 to 2013. She took a break for two seasons to spend time with family, but returned when there was an opening at the beginning of the season.

The Chinooks (20-2) were down 12-13 in the deciding set, but charged over the Vikings with a 3-0 run to take the victory. Kalama has previously played in the state championship game twice, and has reached the semifinals seven times. This year, the Chinooks got to take home the gold.

The Lakeside Eagles took on the number one ranked Lyncs (20-1) with past match-ups having gone in their favor. The two teams had previously met at the state tournament three times, with the Eagles winning each time.

Tumwater finished their season undefeated by beating Woodland in straight sets on November 12th. The Thunderbirds (22-0) took their second championship win in three years with set scores of 25-22, 25-18, and 25-18.

Runner-up Woodland (16-6) will be saying goodbye to coach Jeff Nesbitt, who has coached high school volleyball for an astounding 31 years.

Lakeside High School (Seattle) won their first volleyball state title over Mount Spokane in three sets at the Toyota Center in Kennewick. The scores were 25-15, 25-15, and 25-19.

The Lions were led by senior Kallin Spiller, who had eight kills in just the first set (13 for the match). Spiller, who is quite the athlete, will play both volleyball and basketball at Seattle University after graduation.

Lakeside ended their season on a high note, with a 23-8 record. Seven of the 16 players on their roster will be graduating this Spring.

Auburn Riverside defeated Mead of Spokane to win the state championship, which is an especially exciting victory, considering this is Auburn’s first year in the 4A division.