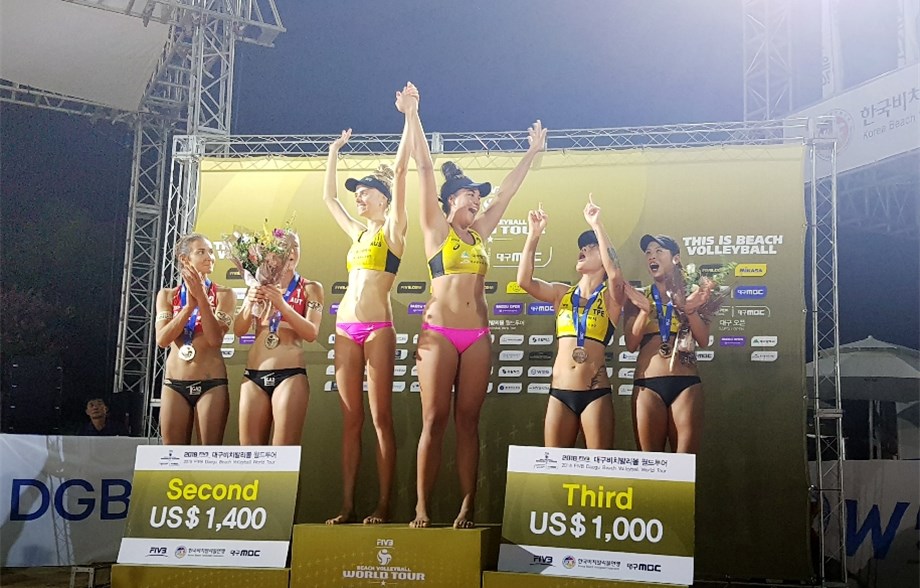 Australians Phoebe Bell/Jessyka Ngauamo remained true to their top seed at the Daegu One Star, going wire to wire with four victories en route to their first ever FIVB World Tour title.  Current Photo via FIVB

Australians Phoebe Bell/Jessyka Ngauamo remained true to their top seed at the Daegu One Star, going wire to wire with four victories en route to their first ever FIVB World Tour title.

The Aussies did not lose a set in the competition, capping the victory with a 21-14, 21-15 win over Austrians Anja Doerfler/Stephanie Wiesmeyr. The gold medal marked their third FIVB podium finish of the year, following third place efforts at the Langkawi One Star and Nantong Two Star.

Bell/Ngauamo bested Austria’s Freiberger/Teufl in pool play, then topped Thailand’s Pronsuda Kritsana/Yodsaphat Pakham in the quarterfinals. In Sunday’s semifinals, the duo moved past Israel’s Noy Chorin/Anita Deev to set up the championship match.

Dorfler/Wiesmeyr’s road to the finals went through two Pool B matches, an opening victory over Pronsuda/Yodsaphat and a straight set loss to Taipei’s Nai-Han Kou/Pi Hsin Liu (21-15, 211-1). In the round of 12, the pair swept Hong Kong’s Yuen Mei/Tin Lai Ng. It would take a pair of tiebreak efforts to put the Austrians in the final. First, Dorfler/Wiesmeyr rallied past Russia’s Valeria Filkova/Ekaterina Filina 21-12, 21-11, 15-6 in the quarterfinals. Next, the pair overcame a 21-9 loss to Kou/Liu to win 24-22, 16-14 in the semis, despite facing double match point at 14-12 in Set 3.

Dofler/Wiesmeyr ended their first ever FIVB medal with the silver in only their fourth World Tour effort.

Kou/Liu wound up with the bronze medal, defeating Chorin/Deev 21-8, 21-14. It was the second medal of the year for the pair, following a silver at the Jinjiang Two Star in June.