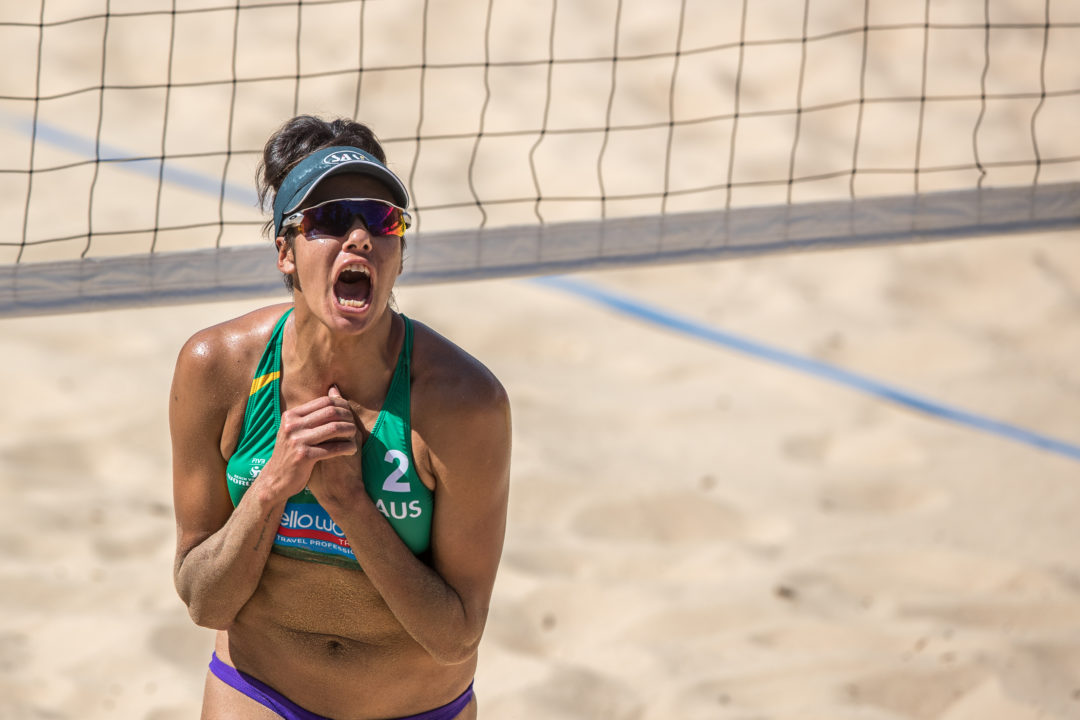 Australian beach volleyballer Taliqua Clancy was dealt a blow to her hopes of qualifying for the 2018 Commonwealth Games when she... Current Photo via FIVB

Clancy and her 2016 Olympic partner Louise Bawden, 36 years old, split last year because, in Clancy’s words, Bawden “wasn’t committed to Tokyo.” Instead, Clancy linked up with Peruvian-born Mariafe Artacho del Solar. The two had played together as juniors, including winning a bronze medal at the 2012 under-21 championships, and they instantly revived their chemistry – including at one point winning 32-consecutive sets at the Asian tour.

After Clancy’s withdrawal, Artacho del Solar paired with a fill-in partner Stefanie Weiler and the two advanced all the way to the gold medal match before falling to Dutch pair Katja Stam and Julia Wouters in the final.

“Taliqua is still in rehab, not getting worse which is a positive, hopefully she can be back on the sand very soon,” Artacho del Solar said after the tournament. “I’m really looking forward to getting back on court with her for sure.”

Volleyball Australia’s selection policies are a bit nebulous, involving judgement decisions by a committee about fitness, results against other highly-ranked Commonwealth teams, and potential for the 2020 and 2024 Olympic Games. Even with limited time together, Clancy and Artach del Solar are Australia’s top-ranked active pairing in the FIVB World Rankings at 37th (though lingering results from Bawden/Clancy rank them 11th in the world). Among Commonwealth nations, only Canadian pairs Pavan/Humana-Paredes (#4), Bansley/Wilkerson (#12), and Gordon/Saxton (#28) are ranked better than Artacho del Solar/Clancy. Rankings are based on each pair’s 8-best results in FIVB-recognized events over the last 365 days, and Artacho del Solar/Clancy have only played in 4 eligible events. If they match their 1,520 points over their next 4 counting events, that would put them in the top 10 in the world.

Clancy and Artacho del Solar have already won 2 stops of the 2017-2018 FIVB World Tour: a 3-star event in Qinzhou, China and a 2-star event in Sydney Australia.

Meanwhile, in the men’s tournament, Chris McHugh and Damien Schumann advanced to the gold medal match before falling to Casey Grice and Bart Bolsterlee. While they didn’t win the tournament, the result was enough for McHugh and Schumann to all-but-secure their spot on the Gold Coast in April – though there are still two more events, the World Tour event in Shepparton and the Western Australia Open, to set that in stone.

McHugh/Schumann are ranked #13 in the world – the highest of any Commonwealth team. Their biggest competition for gold will also come from Canada, and especially pair Pedlow/Schachter, who rank 21st in the world, or World Championship quarter-finalists Saxton/Schalk. Australia’s next-best pairing, Durant/Schubert, come in at #37 in the world.