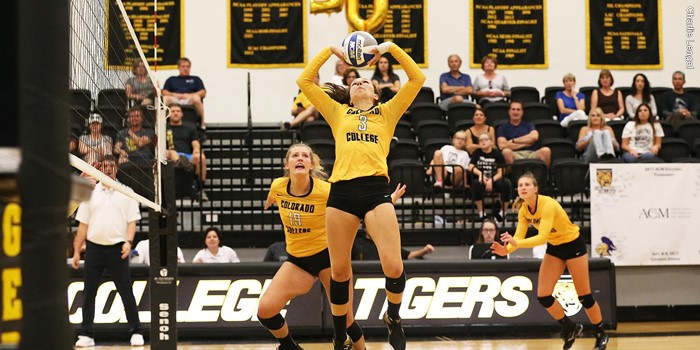 The 2017 NCAA Division III season is rapidly coming to a close, with the NCAA Tournament starting today. The AVCA has released their regional selections for the 2017 season. Current Photo via Colorado College Athletics

The 2017 NCAA Division III season is rapidly coming to a close, with the NCAA Tournament starting today. The AVCA has released their regional selections for the 2017 season.

In the final AVCA Rankings for Division III prior to the tournament, Colorado College jumped up into the #1 position with two of their players – Lizzy Counts, Jordan Mullen and Aria Dudley earning West Region honors.

Pham is in his 15th season as the head coach of the Tommies…Received an at-large berth in the NCAA Tournament, their 11th in 12 seasons…Recorded at least 20 wins in 14 of his 15 seasons…This year’s 25 wins are the most since 2013 (30)…Won the MIAC Regular Season Championship as the only school with 10 conference wins…Named the MIAC Coach of the Year for the fifth time…This marks his third AVCA Region Coach of the Year honor (2007, 2012, 2017).

Wright is in her 11th season leading the Cardinals…Shared the conference regular season title, but won the tournament crown after defeating then-No. 18 Ohio Northern in the final…Clinched a spot in the NCAA Tournament for the fifth time in program history…First ever time serving as a regional host…Currently ranked No. 25 in the AVCA Coaches Poll…Their first national ranking since 2014…Won the OAC Coach of the Year, and three players took home All-OAC First-Team honors.

Trumbo is in his 11th season as head coach at Stevenson… Claimed its sixth consecutive MAC Commonwealth Championship…The Mustangs are making their seventh straight NCAA Tournament trip…Selected as one of eight NCAA Regional hosts…Stevenson is currently riding a 20-match winning streak… Entered the AVCA Rankings on October 10th at No. 25, and climbed to its current No. 15 ranking…Placed a team-high five players on the AVCA Mid-Atlantic All-Region Team and Honorable Mention.

Katz is now in her fifth season as head coach of the Falcons…They won the NACC regular season for the second year in a row…Received the NACC’s automatic bid to the NCAA Division III Tournament…Ranked third in the NCAA Regional Rankings…Earned NACC Coach of the Year honors for the second time…Won her 100th career match on October 13th at Dominican.

Somera is in her fourth season as the Wildcats Head Coach…Johnson & Wales improved the tenth-best home court winning streak in NCAA history to 39 matches…Captured their third-straight conference championship…The Wildcats were selected to host an NCAA Division III Tournament Regional for the first time in school history…Haven’t lost a regular season match since 2015…This marks her second AVCA Region Coach of the Year honor (2016, 2017).

LaMarche is in her third season for the Golden Knights…It’s their 11th consecutive season with at least 20 victories… Six straight Liberty League conference titles and ninth straight NCAA Tournament appearance…For the fifth time in seven years, the Golden Knights will be hosting an NCAA Regional…Currently the top-ranked team in the NCAA New York Region…Haven’t lost a match since October 7th (11 wins in a row).

Kelly is in her 13th year as head coach for Carnegie Mellon… Led the Tartans to a second-place finish in the UAA and a return to the NCAA Championship Tournament… Held a No. 6 AVCA ranking for two weeks, which was their highest in program history (currently No. 10)… Under Kelly, the program has earned four NCAA Tournament bids…Ranked first in the NCAA Mid-Atlantic Region.

Now in her 16th season at the helm, Thompson has led the Jumbos to their ninth NCAA Tournament appearance in program history…Thompson has been the head coach for eight of those berths…Had the top seed in the NESCAC Tournament with an unblemished 10-0 record…Named the NESCAC Coach of the Year for the second straight time and sixth time overall… This is also the second consecutive season she’s taken home the AVCA Region Coach of the Year.

Moriarty is once again having a successful campaign in her second season…Registering a five-win improvement from a year ago, they won their first conference tournament since 2013…They ride a 15-match winning streak into the NCAA Tournament…Currently rank second in the nation in team blocks per set (2.47)…Took home the SAA Coach of the Year, and placed five players on the All-SAA First and Second-Teams…Ranked second in the NCAA South Region.

Swan is in his 20th season as head coach of Colorado College…Received their first ever No. 1 ranking in the AVCA Coaches Poll on October 31st…The Tigers claimed their first Southern Collegiate Athletic Conference championship since 2012…Swan is the winningest coach in Colorado College volleyball history…Current .969 winning percentage is the program’s single-season record…Second AVCA Region Coach of the Year award (2011, 2017).