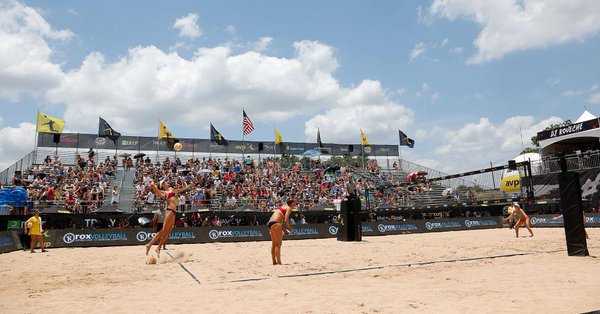 The Association of Volleyball Professionals returned to Hawaii for the first time in 13-years this past weekend. Fort Derussy, Waikiki... Current Photo via AVP Waikiki

The Association of Volleyball Professionals returned to Hawaii for the first time in 13-years this past weekend. Fort Derussy, Waikiki hosted the Hawaii Invitational as the last stop on the 2018 AVP tour.

The #AVP has returned to #Hawaii for the first time in 13 years. We have already fallen in love, so let’s do it again next year 😉 Read more👉🏼 https://t.co/59YJsRLGdD

The AVP, the longest running beach volleyball tour in the world, is not only adding the Hawaii invitational to the calendar for this season, but according Pacific Business News reporter HJ Mai, owner of the AVP, Donald Sun, has made claims that the AVP is planning to make it a permanent tour stop.

“The goal is to come every year, and it becomes a mainstay,” Sun told PBN. “We want to grow the attendance and the size of the stadium year over year. We want to make sure that we fill the stadiums and as it grows we continue building it up just like at every other stop that we go to.”

Taking place from September 15-16, the team of Phil Dalhausser and Nick Lucena won the men’s tournament and the team of Alix Klineman and April Ross won the women’s tournament. Both teams earned $75,000 in prize money for the win.

While this weekends event marked the return of the tournament to Hawaii, Sun reportedly told PBN that the AVP is still exploring expansion options in Hawaii beyond Oahu (most populated Hawaiian Island).

“That’s the goal too. If there’s enough interest, we definitely would want to go to the different islands,” Sun told PBN. “Me personally, my favorite island is Maui. It would be great to be able to go over there and hold this event.”