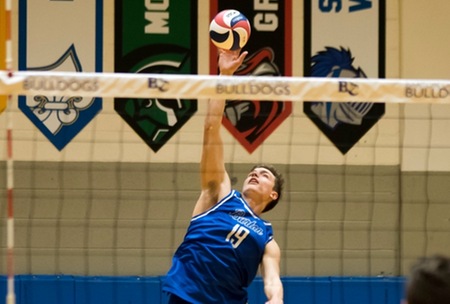 WILSON, N.C. – In what was supposed to be an epic match-up between the last two undefeated teams in Conference Carolinas, Barton left no doubt who the true leader is in the conference. It took Barton only 82 minutes to dispatch (RV) King in straight sets, hitting .319 to the visitors’ .076.

Barton was led offensively by Angelos Mandilaris with a match-high 18 kills, hitting .389 on the afternoon. He also added 4 digs and a block. Aleksa Brkovic finished with 13 kills on .360 hitting, and managed to overcome his deficiencies behind the service line (5 of teams’ 13 SE) with 4 digs, 2 blocks and an ace of his own. Setter Oscar Fiorentino had the match’s lone double-double; he distributed 33 assists and dug 10 balls. Libero Wilfredo Rivera had a match-high 15 digs to lead the floor defense for the Bulldogs. Nick Leary had a team-high 3 blocks at the net.

For King, they, like their offense, appeared anemic after their 5-set battle the night before at Mount Olive. Jeff Sprayberry continued to shoulder the offense for King with 9 kills. Kiel Bell finished with 7 kills, 6 digs, 3 blocks and an ace. Setter Nick Drooker battled valiantly, filling up the stat sheet with 22 assists, a match-high 3 aces, 3 blocks and 2 digs. Libero Ryan DeLong scooped 12 digs in the loss. Leading the way at net defense was Jon Wheaton with a match-high 4 blocks.

WILSON, N.C. – The Barton College men’s volleyball team won the battle of the final two undefeated teams in the Conference Carolinas with a 3-0 sweep (25-18, 25-17, 25-20) of King University on Saturday inside Wilson Gym.

Barton (10-6, 8-0) hit .319 as a team in the match and received a match-high 18 kills from sophomore Angelos Mandilaris. The Bulldogs have won each of their last five matches and improved to 7-1 at home this season. King (10-3, 7-1) saw its nine-match winning streak come to an end on Saturday as the Tornado hit .076 as a team while committing 17 attack errors.

A. Mandilaris hit .389 in the match to lead the Bulldogs and tallied four digs in the process. Junior Aleksa Brkovic tallied 13 kills while adding one ace, one solo block, and four digs for Barton. Redshirt sophomore Oscar Fiorentino recorded a double-double of 33 assists and 10 digs for the Bulldogs, while freshman Wilfredo Rivera had a match-high 15 digs to go along with three assists.

Jeff Sprayberry paced the Tornado with nine kills in the match to go along with three digs. Kiel Bell added seven kills, one ace, and six digs for King, while Jon Wheaton tallied five kills to go along with four block assists. Nick Drooker tallied 22 assists and three aces, while Ryan DeLong notched a team-high 12 digs.

The first set would be tied 5-5 before Barton went on a 4-0 run to take a 9-5 advantage. BC saw its lead trimmed to 12-10 following an attack error by the Bulldogs. A block by junior Justice Lord and junior Vasilis Mandilaris sparked a 4-0 rally for BC that would up its lead to 16-10. The Bulldogs tallied the final two points needed to secure the opening set as V. Mandilaris tallied consecutive kills to complete the 25-18 victory and put Barton up 1-0 in the match.

Set two featured a trio of lead changes along with eight tie scores as King took a 4-3 lead before Barton rattled off four-straight points to go up 7-4. The Bulldogs held a three-point edge until King rallied to knot the score 9-9 following a kill by Wheaton. BC continued to battle with the Tornado as the Bulldogs turned a 13-13 tie into a 17-13 lead following a 4-0 run and a timeout by King.

King trimmed the deficit to 17-14 after an attack error by Barton, but the ensuing 5-0 run for the Bulldogs completely shifted the momentum inside Wilson Gym. BC upped its lead to 24-16 after a kill from A. Mandilaris and would take a 2-0 lead in the match as junior Nick Leary sealed the 25-17 victory with a kill.

BC raced out to a 9-3 lead in the third set as A. Mandilaris and Brkovic tallied two kills each to spark a 4-0 run for the Bulldogs. The Tornado cut the deficit to 9-6 after an ace from Bell and would later trim the gap to 11-9 after an ace from Adam Krzos. Barton’s lead would be one for a majority of the set until consecutive kills from A. Mandilaris gave the Bulldogs a 23-18 edge. A kill from Bell cut the deficit to 23-20 before BC took a 24-20 lead. Following a timeout by the Tornado, Barton completed the sweep of King off an attack error by Sprayberry that gave BC the 25-20 victory in the set.

WILSON, N.C. – The King University men’s volleyball team traveled to take on Barton College Saturday afternoon in a matchup of the only two teams left in Conference Carolinas with an undefeated conference record. Coming off of a long and exhausting five set match win over the University of Mount Olive last night, the Tornado not only battled a strong Barton squad, but fatigue as well and fell to the Bulldogs 3-0.