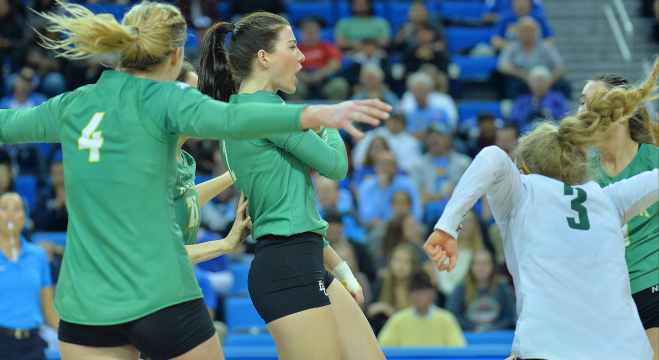 Baylor hit at a .407 clip in the decisive fifth set of an upset win over No. 10 BYU on Saturday night, issuing the Cougars their first loss of the season. Current Photo via Baylor Athletics

HONOLULU – Baylor hit at a .407 clip in the decisive fifth set of an upset win over No. 10 BYU on Saturday night, issuing the Cougars their first loss of the season.

The teams were tied at 4-all in Set 5, before Baylor pulled away with a 6-2 run, including two kills each by freshman outside Yossiana Pressley and junior outside Aniah Philo. The teams split the next six points, then redshirt senior outside hitter Katie Staiger scored two of the next three with kills to sew up the 15-10 win and the upset.

The teams were tied 8-all in Set 1, when Pressley tacked on a pair of kills to go up 11-8. A block by Freiberg and Philo and two more by Kennedy Redding pushed the margin to four at 18-14. BYU came back to tie things up at 18 with two Bear miscues. The teams split the next six points leading to a 21-all tie. BYU wrapped up the set on a 4-0 run, including two Miller putaways.

BYU jumped ahead 13-8 on a block by Burnett and Miller. Two kills and two blocks by Burnett aided the early run. Baylor pulled within one at at 18-17 on a stuff by Fanning and Pressley after kills by three different players. A block by Freiberg and Philo knotted the score at 21. The Cougars scored four of the final five points for a 25-22 win. A Jones-Perry putaway capped the victory.

Baylor took control after the intermission, scoring eight of the first 12 points in Set 3. A pair of blocks and two Pressley kills helped the Bears grab the lead. A kill and a block by Fanning upped the margin to six at 13-7. BYU answered with four-straight points, including a block and an ace by Burnett. An ace by Staiger capped a 5-1 Bear run, which made it 18-12. The Cougars would get no closer than five the rest of the way as Fanning kept the match going with a kill at 25-18.

The teams tied 18 times in Set 4, with neither gaining more than a two-point edge. Down 12-11, Baylor scored three in a row, incluidng kills by Staiger and Fanning to go up 14-12. BYU knotted the score at 14 and the teams split the next 10 points to make it 19-all. A kill and a block by Pressley pushed Baylor in front 21-19. The Cougars used a 4-1 run, including two Jones-Perry kills, to vault ahead 23-22. A Miller kill gave BYU a match-point try at 24-23. A kill and an ace by Staiger turned the tables, putting Baylor on top. A Fanning putaway gave the Bears another try at 26-25. A Miller kill kept the set going, but kills by Braya Hunt and Pressley tied the match at two set apiece.

Katie Staiger set a season-high 26 kills on a .303 attack efficiency and added 14 digs for the double-double. Yossiana Pressley contributed a season-high 18 kills while Braya Hunt had a career-high 29 assists against the Cougars (8-1).

Jana Brusek nearly tied her career high with 31 digs, leading all players in the back row.

The Bears and Cougars fought it out in the opening frame, resulting in 10 ties. A Camryn Freibergand Aniah Philo block at 18-14 forced a BYU timeout, but the Cougars went on a 4-0 to close the set and take the early advantage, 25-21.

BU was led by Staiger who added six kills in the second set, but BYU ended the frame on a 3-0 run to go up 2-0.

Baylor would start chipping away in the third set and pulled away by as much as seven behind a .306 attack effort to pull within one, 25-18.

The fourth set, containing 18 ties and seven lead changes, went to extra points as the Bears fought off a match point to force a fifth set after a kill by Pressley.

Baylor hopped out an 8-6 lead at the changeover and never looked back as Staiger put down the final kill for the top-10 upset in Honolulu.

“We learned a lot about ourselves today and the kind of focus it takes to win a match,” BYU head coach Heather Olmsteadsaid. “We had opportunities to close it and didn’t get it done. Baylor played fantastic defense and made it really hard for us to get kills. We’ll keep working hard to get better.”

Miller led the Cougars with a season-high 24 kills. Lyndie Haddock set the team with 47 assists along with 12 digs while Mary Lake had 21 digs. Cosy Burnett contributed seven blocks to go with 10 kills and Veronica Jones-Perry collected 12 kills and 10 digs for her first career double-double.

A Haddock service ace gave BYU (8-1) a 4-3 edge to start the decisive fifth set. Baylor (6-3) surged ahead with a 4-1 run to take a 7-5 advantage. The Cougars struggled to find an offensive rhythm as the Bears cruised from there, taking the set and match 15-10 from a kill.

A trio of kills from Miller helped the Cougars take a 7-5 lead early in the second set. Another Jones-Perry ace extended the BYU lead to four, 12-8, forcing a timeout from the Bears. The Cougars stayed ahead at 17-14 before a 3-1 rally from Baylor tied the score at 21-all. An attack error from the Bears gave BYU set point, and a Jones-Perry kill ended the set 25-22.

Baylor jumped out to an 8-4 lead in the third set, and extended it to six at 13-7 following a kill. The Cougars countered with a 4-0 run, including a Miller and Redding block, to get back within a pair, down 13-11. A 5-1 Bear rally ensued, increasing the Baylor lead back to six, 18-12. The Bears maintained their advantage through the rest of the set, winning it 25-18 on a kill.

BYU took a 6-4 lead to start the fourth set, but Baylor took control by scoring the next four-straight points to go up 8-6. A Burnett and Miller block knotted up the score at 14 apiece. The Bears then surged ahead 21-19, forcing a timeout from the Cougars. BYU took a 23-22 advantage from a Baylor attack error, but the Bears rallied to take the set in extra points, 28-26, forcing the decisive fifth set.

Following the last match of the day BYU, Baylor and Hawai’i all ended the invitational with a 2-1 record. After tie-breakers, BYU was declared the winner of the tournament, and Miller was named the Most Valuable Player and added to the all-tournament team along with Jones-Perry and Lake.

The Cougars next face Utah in the Deseret First Duel in Salt Lake City Thursday, Sept. 14, at 7 p.m. MDT. The match will be televised live on the Pac-12 Network. Links to a video stream and live stats can be found on the BYU women’s volleyball schedule page.