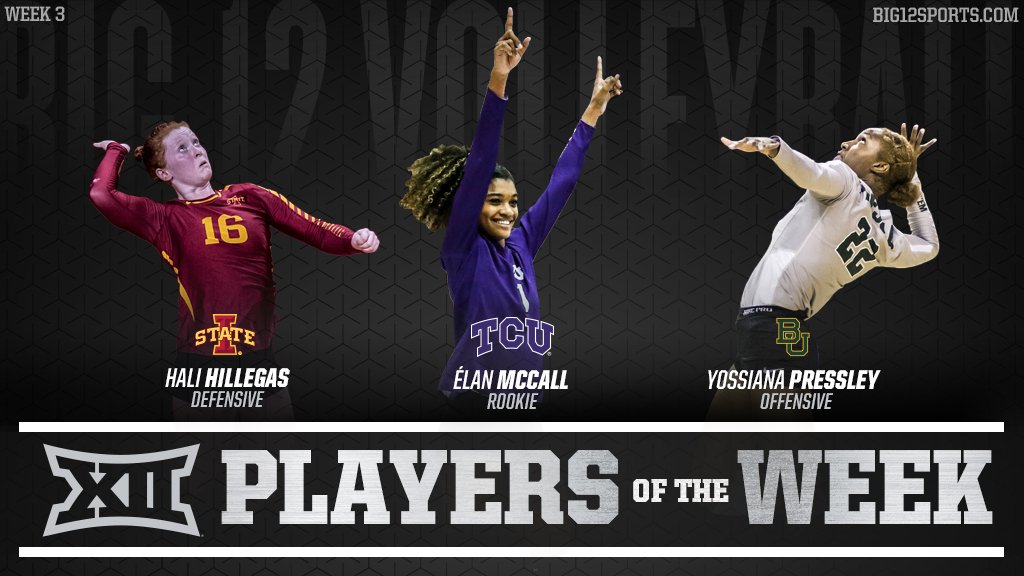 Pressley earned her first Big 12 honor of 2018 and the 10th of her career after posting 5.85 kills per set en route to Offensive Player of the Week accolades. The sophomore outside hitter racked up a career-high 32 kills on a .313 hitting effort in the Bears’ upset of Wisconsin. The Cypress, Texas, native tacked on 29 putaways against Texas-Rio Grand Valley and finished the weekend with 15 putdowns against Rice. Pressley was tabbed as the Highest Scorer at the Baylor Classic.

Congrats to the #Big12VB Offensive Player of the Week, Yossiana Pressley!

Hillegas nabbed her 10th career Big 12 weekly award after posting 6.09 digs per set against Creighton, Wichita State and Nebraska. The redshirt junior racked up 25 digs against the Bluejays, tacked on 30 saves vs. the Shockers ad 12 vs. the Huskers. The 30-dig effort vs. Wichita State marked the third of the season for the Charles City, Iowa native.

McCall earned her program record third straight rookie accolade after garnering MVP honors at the Fight in the Fort last weekend. McCall extended her double-digit kill streak to 10 matches, notching 56 kills (5.09 per set) and two double-doubles over the weekend in leading the Horned Frogs to a 3-0 record. The Leander, Texas, native posted 16 kills, 11 digs and three blocks against SMU and notched 25 kills and 22 digs while hitting .429 against Louisiana. On the weekend finale against Montana State, McCall just missed a double-double with 15 kills, nine digs and two blocks.