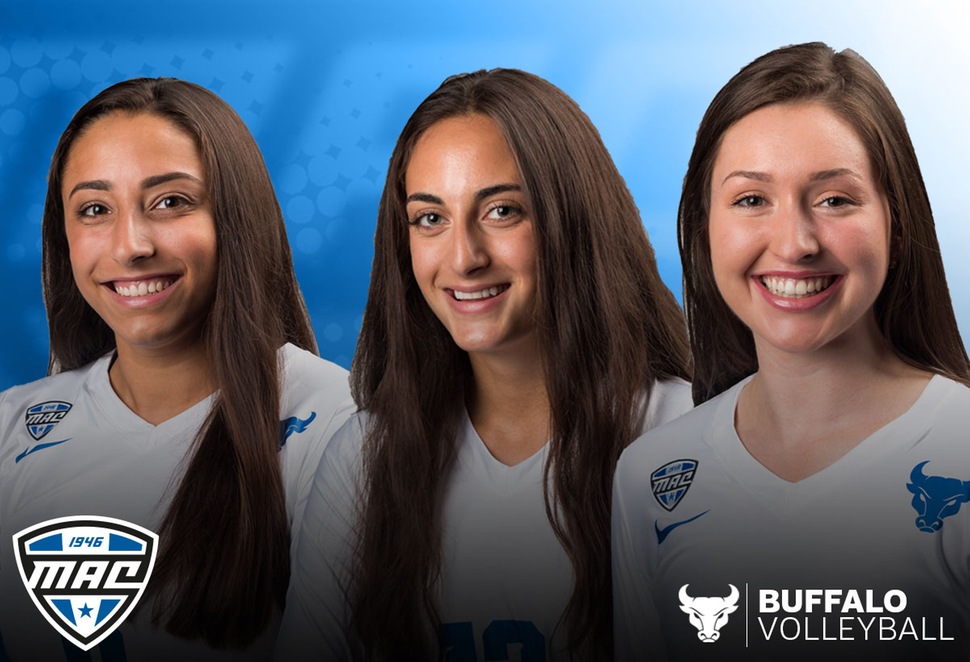 Andrea Mitrovic, Buffalo, Outside Hitter
Sophomore – Mississauga, Ontario/Silverthorne Academy
Sophomore Andrea Mitrovic was named to the all-tournament team of the Arkansas Classic after she finished with 51 kills in the three matches, averaging 4.25 kills per set.  Her best match came in the five-set win over Butler as she tied her career high with 24 kills, while having just 10 errors on a career-high 71 total attempts. Mitrovic added 14 kills in just three sets against Arkansas and had 13 more kills against Northwestern.  She also finished with five aces from the service line as she had three against the Wildcats alone.  Defensively, she added 31 digs on the weekend.

Jordan Smith, Eastern Michigan, Outside Hitter
Senior – Solon, Iowa/Solon
Jordan Smith was named the William & Mary Colonial Classic Most Valuable Player after averaging nearly 13 kills per set and hitting .397 over the three-match span. The senior’s .652 attack percentage against Norfolk State set a new career-best, and she’s now had double-digit kill games in eight of 11 matches on the season. Of all the records for the week, the highlight was the Solon, Iowa native becoming the 15th player in Eastern Michigan history to reach the 1,000-kill plateau. Overall, she finished with 53 kills and a .333 attack percentage over four matches, adding 19 digs, 10 aces, and three total blocks.

Kristina Nieves, Buffalo, Middle Blocker
Junior – Ringwood, NJ/Passaic County Technical Institute
Junior middle blocker Kristina Nieves led the Bulls defensively this past weekend as she averaged 1.50 blocks per set during the 12 sets played by UB.  In the weekend opener against Big Ten foe Northwestern, Nieves recorded nine blocks, which was a new career high for her.  She added three blocks against Arkansas of the SEC and then had six blocks in UB’s five-set win over Butler, including two solo blocks.  Through just nine matches, Nieves already has 41 blocks on the year, averaging more than one per set.  Offensively, she hit .455 against the Razorbacks and had 11 kills in the win over Butler.

Maurissa Leonard, Toledo, Libero
Senior – Oregon, Ohio/St. Ursula
Averaged 6.55 digs per set over the weekend, during which Toledo went 2-1 with wins over Duquesne and Manhattan…led team in service aces/set…Recorded 32 digs in the win over Duquesne; also tallied her first kill of the season…Had match-high dig totals in the matches against Morehead State and Duquesne…Entered this past weekend leading the country in digs per set.

Congratulations to @MaurissaLeonard on being named @MACSports West Defensive Player of the Week! pic.twitter.com/Vj85tqUSRB

Tia Gleason, Buffalo, Setter
Sophomore – North Bay, Ontario/North Bay
Sophomore setter Tia Gleason stepped in during the last two matches this past weekend and led the Bulls to a win with a career performance against Big East foe Butler. In the five-set win over the Bulldogs, Gleason dished out a career-high 53 assists, while adding 17 digs and a pair of service aces.  She also had two kills and two blocks.  Earlier on Saturday, the Memphis transfer finished with 28 assists and three blocks against Arkansas.

Riley Taylor, Eastern Michigan, Setter (Junior – Indianapolis, Indiana/Perry Meridian)
Redshirt senior Mallory Rajewski and junior Riley Taylor executed the 6-2 to perfection over the course of the week, averaging 12.00 assists per set in four matches, culminating in a fantastic showing at the William and Mary Colonial Classic. The pair divvied out an outstanding 42 assists in a three-set sweep over tournament host, William and Mary. The pair also averaged over 10 assists per set in each of the Eagles’ three-set sweeps over Norfolk State and Savannah State. The duo has a strong season average of 11.80 assists per set and provide fantastic defense with a 5.11 average.

🏐 Nieves averaged 1.50 blocks per set during the 12 sets played.
🏐 Mitrovic finished with 51 kills in the three matches.
🏐 Gleason dished out a career-high 53 assists. #MACtion pic.twitter.com/FGWLHGtlLF