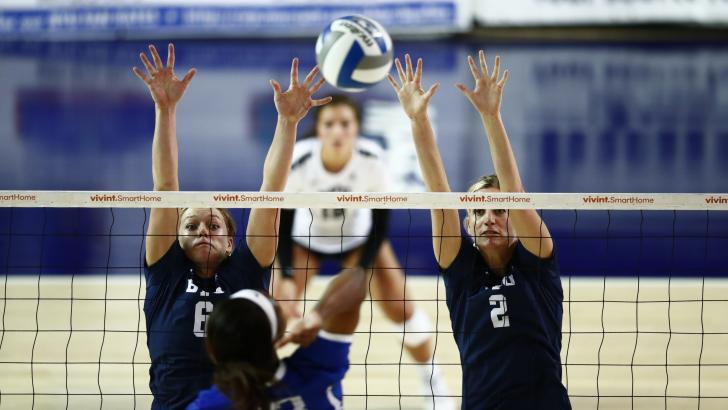 BYU won the block 13.5 to 5 and took advantage to 16 extra points off errors (27-11) to lift the Cougars to 4-0 on the season with a close three-set win over Boise State. Current Photo via BYU Athletics

Senior outside Sierra Nobley put down a match-high 23 kills and hit nearly .300 in the match, while freshman outside Kiley Lewis added 12 kills, but it was not enough. Senior libero Maddi Osburn pulled up a match-high 23 digs.

The Cougars hit at a .316 clip in Set 1, cruising to a 25-19 win. BYU boasted a nine-point lead at 19-10 after breaking away with a 12-2 run. Four Jones Perry kills and three BSU errors aided the rally. Boise State rallied to within five at 23-18 on a Laney Hayes ace, forcing a Cougar timeout, but could not complete the comeback. Jones-Perry added two more kills to cap the stanza.

After a 9-all tie in Set 2, Boise State gained some separation at 17-11 with help from three Nobley kills and two by junior outside Sabryn Roberts. Leading by seven at 19-12, the Broncos fell apart with a trio of errors, kicking off a 5-0 BYU run. BSU maintained the edge, however, earning its first set point chance at 24-22 on a Nobley kill. The Cougars kept the set going with a Redding putaway, then capitalized on three straight Boise State errors, including a block, to steal away the 26-24 win.

The teams split the first 16 points of Set 3, before kills by Hayes and Lewis put Boise State on top by two at 12-10. A Danelle Stetler putaway and two BSU hitting miscues gave BYU the lead at 13-12. The Broncos led 15-14 at the media timeout, but the Cougars soon led 18-15, scoring four straight out of the break, three on Boise State errors. BSU eventually caught up at 21-all on a Roberts kill, but BYU again had an answer. Kills by Redding and Jones-Perry coupled with another error gave BYU its first match-point try at 24-21. A 3-0 run, including two kills and a Cougar service error, knotted the score at 24. A hitting error and a block by Stetler and Burnett wrapped up the sweep.