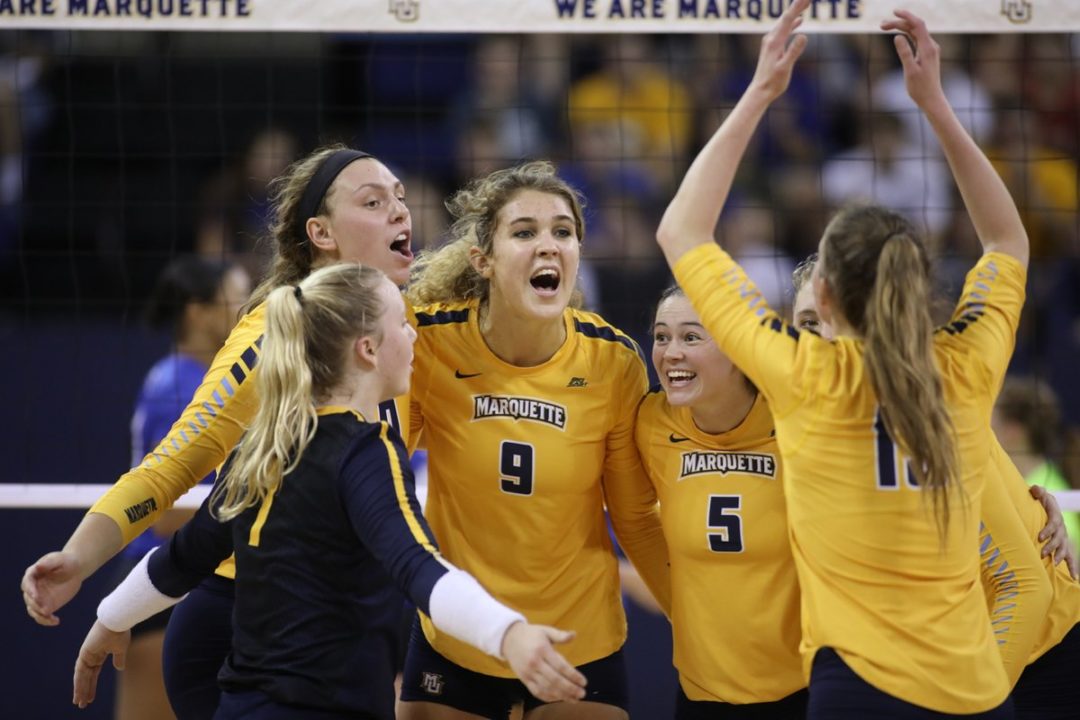 Marquette, now ranked for the first time this season, brings a 5-1 record into its home tournament against BYU, USC and Syracuse this weekend. Creighton (4-2) meanwhile takes a three-match win streak into Thursday's home match with Nebraska.  Current Photo via Marquette Athletics

With two weekends of play completed Creighton moves up to No. 14, while Marquette enters the poll at No. 25. The Bluejays began at No. 13 in the preseason poll, and fell just one spot after their first tournament to No. 15 last week. The Golden Eagles hovered just outside the Top 25 in each of the previous two polls, while still receiving votes.

Creighton went 1-2 during their first weekend of play in Los Angeles, Calif., taking down then-No. 5 Kentucky in the Trojan Invitational, but falling to host No. 10 Southern California and Northern Iowa. The Bluejays made quick work of their opponents this past weekend at the SMU Doubletree Classic in Dallas, Texas. Without giving up a set, Creighton swept Arkansas State, North Carolina State and the host Mustangs to come away with the crown. Creighton is now 4-2 overall.

Marquette, now ranked for the first time this season, improved to 5-1 overall. The Golden Eagles’ only loss came at then-No. 16 Baylor in their first weekend tournament. Marquette has swept their opponents in all of their wins so far. MU took down Texas State and LSU in the Baylor Invitational, and in the Marcia E. Hamilton Classic, the Golden Eagles defeated Kansas State, Western Kentucky and host Saint Louis in straight sets.

Butler hosted the Top Dawg Challenge at Hinkle Fieldhouse over the weekend. The Bulldogs defeated Eastern Illinois, but fell to Auburn and Illinois State, putting them at 1-5 on the season.

DePaul (2-3) traveled to Mount Pleasant, Mich. for the Chippewa Invitational. The Blue Demons took down host Central Michigan, but were defeated by Valparaiso and La Salle.

Georgetown (4-4) hosted the Georgetown Classic where the Hoyas went 2-2. Georgetown recorded wins against Norfolk State and George Mason, but lost to Penn and UNC-Wilmington both in five sets.

Providence was victorious in their own 14th Annual Friar Classic, taking down Fairleigh Dickinson in straight sets, along with UMass-Lowell and Brown both 3-1. The Friars currently hold a 4-2 record.

St. John’s traveled upstate to compete in the Cornell Invitational. The Red Storm swept both Siena and host Big Red, but suffered their first loss of the season to Buffalo in a close match, 3-2. SJU moves forward with a league-best record of 6-1.

Seton Hall hosted its most-competitive tournament in history this past weekend.  The Pirates welcomed in defending Atlantic-10 Conference champion and preseason favorite VCU, defending ACC champion No. 14 Pittsburgh and undefeated Oklahoma to South Orange.  On Friday, the Pirates rallied from a 2-1 match deficit to defeat VCU in five sets.  On Saturday, The Hall suffered straight-set losses to both No. 14 Pittsburgh and Oklahoma.

Villanova participated in the Kristen Dickmann Invitational, hosted by Navy. The Wildcats won two out of three, defeating Dartmouth and the Mids in three sets each. Alabama handed the Wildcats their first loss of the season in five sets to put them at 5-1 overall.

Xavier traveled all the way to San Juan for the Puerto Rico Tournament over the holiday weekend. The Musketeers fell to Missouri, Arizona State and Towson, which leaves them at 1-4 on the season.