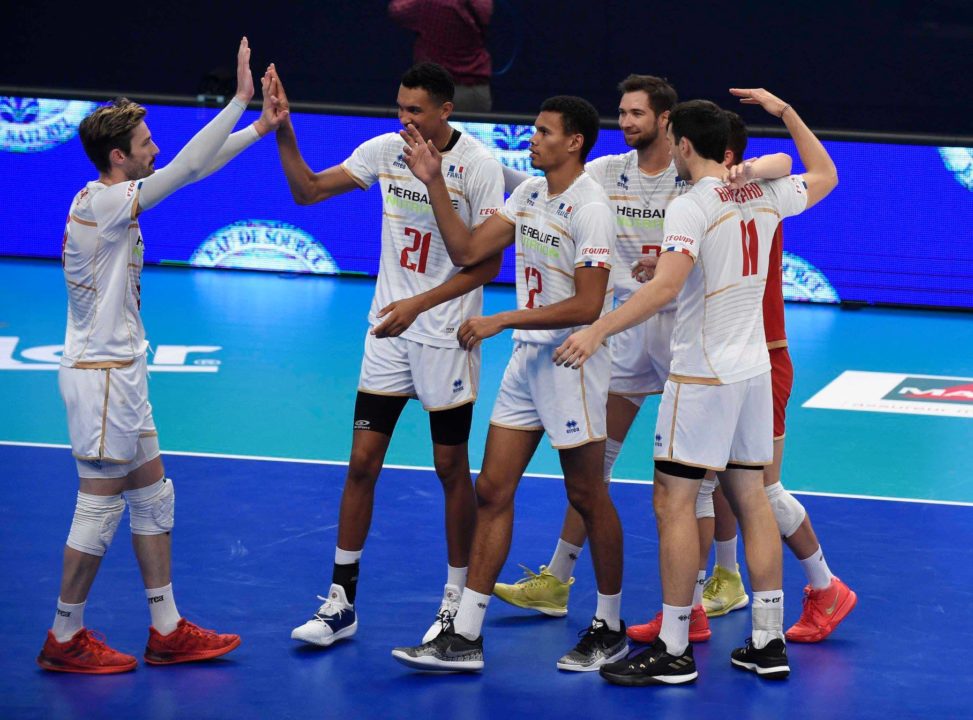 France played both matches without Earvin N'Gapeth, and they got some momentum late in the 2nd when they brought in 3 reserves to finish the match. Current Photo via FFVB

Without N’Gapeth, Kevin Tillie, son of French head coach Laurent Tillie, took the start in the match at outside hitter. He played the 1st set alongside the regular lineup of Julien Lyneel, middle blockers Kevin Le Roux and Nicolas Le Goff, setter Benjamin Toniutti, and libero Jena Grebennikov, and opposite Stephen Boyer, who missed last weekend’s Wagner Memorial Trophy in Poland with a stiff neck.

In the 2nd set, after France falls behind again early, Laurent Tillie brought on Jean Patry at opposite and Antoine Brizard at setter, and then 20-year old wunderkind Barthelemy Chinenyeze at middle blocker later in the set. The moves stabilized the team a bit, but too many errors (16 in the first two sets) wound up still costing them the set.

An outburst from Chinenyeze at the service line put Serbia on their heals in the 3rd set, and France won that set, then does so again in the 4th with their new lineup, including 4-straight winning points from Julien Lyneel on serve.

Coach Tillie rolled that lineup to the 15th, where the teams fought back and forth to 12-12 before France runs off the last 3 points, including the last two from Kevin Tillie, to seal the outcome.

The match was the 2nd of two friendlies, after Serbia won the first by the reverse score of 3-2 (15-25, 21-25, 25-21, 27-25, 15-13). In that match (view stats here), it was the opposite story, with France jumping out to an early 2-0 lead before Serbia fought back. Laurent Tillie made similar lineup changes in that match, but they didn’t stick as well for him. Both teams had nearly identical statlines (6 aces for France, 2 for Serbia; Serbia hit 50%, France 49%; both teams had 15 blocks), but France’s service decline, while their reception improved, in the last 3 sets, and that was enough to swing the match.

Thoughts from  the coaches:

French head coach Laurent Tillie –  “We started the match very well, but very slowly, the Serbs took over with an incredible quality of service. We lose the first two sets of little, but we did not break up. What was interesting was finding solutions to win at all costs. Solutions were found, there were nice entries, and keeping up helped us raise our level of play. It was important to remember what it means to suffer to win. No match will be easy and you have to remember it, to be patient. For fifteen days, we have been working to find other solutions in attack that simply play the big arms, we saw the result today. The players who came in took pleasure. I like to establish a hierarchy and turn around, but if some players, by being good, make me question this hierarchy, that’s good. The most important thing is that everyone feels they can bring something to the group, that’s the France team.”