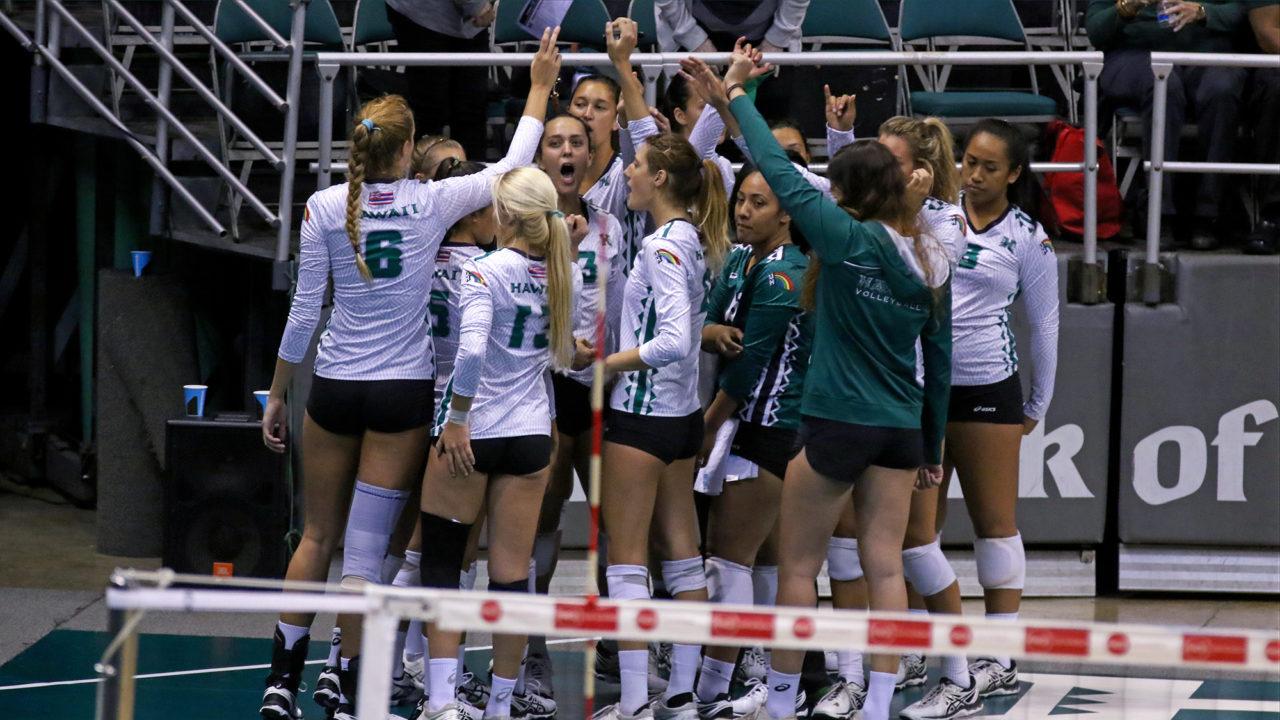 HONOLULU – The Rainbow Wahine bounced back from a 5 set loss on Thursday night to defeat Baylor in a rollercoaster of a match on Friday night in the Stan Sheriff Center.

Three Hawaii players posted double-figure kills in McKenna Granato with 22 kills and 13 digs, Emily Maglio with 18, and Kirsten Sibley with 10.

Baylor’s offense was led by Yossiana Pressley, who had 18 kills on a .359 hitting percentage. Katie Staiger posted a double-double with 16 kills and 12 digs on a .217 clip.

Senior libero Savannah Kahakai moved up to No. 9 all-time at Hawaii with 1,123 career digs after tabbing 14 against the Bears. She needs 15 more to move up another spot on the Top 10 list.

Both teams will play their last matches of the Outrigger Resorts Volleyball Challenge on Saturday night in the Stan Sheriff Center. Baylor will take on tenth ranked BYU, and Hawaii will finish out their non-conference play with Nevada.

HONOLULU—The University of Hawai’i women’s volleyball team (3-5) overcame a heartbreaking five set loss last night to come back on Friday night with a thrilling five set win over Baylor, 18-25, 25, 25-14, 18-25, 25-17, 16-14. The ‘Bows found that redemption with a solid team effort in a rollercoaster of a game at the Stan Sheriff Center.

Junior outside hitter McKenna Granato led UH with match-high 22 kills. It was her third straight match with 20-plus kills for the ‘Bows. She also notched her fourth double-double of the year with 13 digs and was in on a pair of blocks.

Senior middle hitter Emily Maglio set a career high with 18 kills and 35 attacks. She led UH with seven blocks. So far in the Outrigger Resorts Volleyball Challenge, Maglio has recorded 32 kills with just three hitting errors in 63 swings for a .460 tournament hitting percentage.

Sophomore setter Norene Iosia dished out a career-high 63 assists. Her previous career high was 58 at Cal Poly last season. Iosia added eight digs, four blocks, a service ace and a kill to fill her stat line for the night.

A night after breaking into the Top 10 UH career record book in digs, senior libero Savanah Kahakai climbed up to No. 9 all-time with 1,123 career digs after recording 14 against the Bears. Kahakai passed former UH great Martina Cincerova who had 1,111 career digs. Kahakai only needs 15 more digs to tie Suzanne Eagye who is No. 9 with 1,138 career digs.

The ‘Bows got off to a slow start in the first set. The teams were tied at 10-10 before Baylor went on a run scoring nine out of the next 13 points. Baylor took the set 25-18.

Hawai’i came out swinging in the second set, and led for majority of the frame, winning it, 25-14. Baylor led 1-0, but after that UH took control, jumping out to as big as a 12 point lead late in the set. McKenna Ross reeled off five straight serves early to give UH a6-2 lead. Hawai’i slowly pulled away scoring in small bunches.

Tied at one set apiece, both Baylor and Hawai’i were fighting for the lead. The Bears were able to take the third set 25-18. The teams were tied at 11 when Baylor went on a six point scoring run and never looked back.

But, the Bows were not ready  to throw in the towel. UH fought back to capture the fourth set 25-17 to force a winner take all fifth set. Hawai’i went on an early six point run behind the serving of Ross to pull away for the set win.

The fifth and deciding set was tight battle until the very end with nine ties in the set, but the ‘Bows found a way to prevail, winning their first fifth set in four tries, 16-14.

For the Baylor Bears, freshman outside hitter Yossiana Pressley led the team with 18 kills, a service ace and nine digs. Senior middle hitter Camryn Freiberg led the Bears in blocks with four. Junior outside hitter Aniah Philo had a match high 20 digs.

The Bows finish their non-conference tournaments as they taking on former Western Athletic Conference rival, Nevada on Saturday, at 7:00 p.m. in the final match of the Outrigger Resorts Volleyball Challenge.

The Bears were led offensively by Yossiana Pressley who set a season-high 18 kills on a .359 hitting efficiency. Katie Staiger recorded another double-double with 16 kills and 12 digs while Aniah Philo led the back row with 20 digs.

Baylor came out quick in the opening frame and led 15-12 at the media timeout. A solo block by Camryn Freiberg gave the Bears a late 19-13 lead to eventually close it out, 25-18.

Hawai’i (3-5) came roaring back as the Bears hit a match-low .129 in the second set, committing six attack errors and allowing the Rainbow Wahine to compile an 85 percent sideout percentage to even the match, 25-14.

UH once again answered the Bears as they used 18 kills in the fourth set to send the match to a decisive set.

The fifth contained nine ties and one lead change and was knotted up at 13-13. Baylor erased a match point, but BU couldn’t string together a run to drop the final set in extra points, 16-14.

HIGHLIGHTS
• Yossiana Pressley led the Bears with 18 kills on a .359 attack effort.
• Katie Staiger recorded her fifth double-double of the season (16 kills, 12 digs).
• Aniah Philo led all players with 20 digs.
• Bears hit .444 to start the match, compiling 15 kills on 27 attacks in the first set.

STAT OF THE MATCH
18 – the new season-high kill count for freshman Yossiana Pressley.

WHAT’S NEXT
The Bears conclude tournament action against 10th-ranked BYU at 8 p.m. CT Saturday at the Stan Sheriff Center.