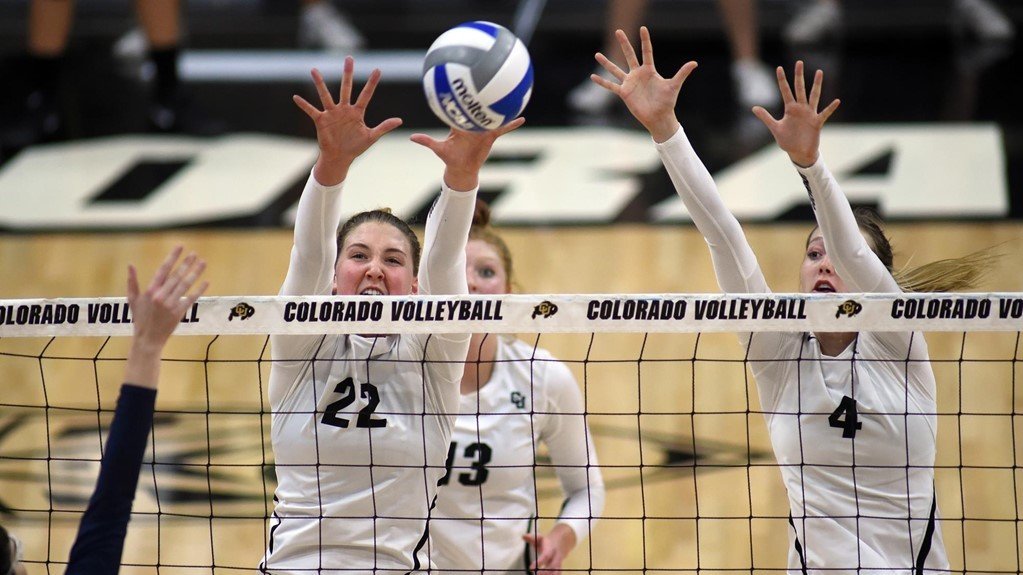 The Buffs take down the Fighting Illini for the second time in two years in the Pac 12/Big Ten Challenge. Archive Photo via Colorado Athletics

CHAMPAIGN, Ill. – The Buffs upset the Fighting Illini in a 5 set battle on Friday afternoon on day two of the Pac 12/Big Ten Challenge. This was the 2nd-straight year in which Colorado beat Illinois, and also makes the Buffalos 3-2 over the last 2 seasons against non-conference opponents in the top 25 (as compared to just 3-8 against Pac-12 top 25 opponents in the same period).

Joslyn Hayes claimed set 1 for Colorado with back to back kills to take it 25-23. Set 2 would go to Illinois. Set 3 had 14 ties and 5 lead changes, but would eventually go to the Buffs. Illinois dominated set 4 (25-12) to force a fifth set. Naghede Abu and Alexa Smith put away the final two balls for Colorado to take set 5 17-15.

Colorado hit .261 on the night, with a .500 hitting percentage in the fifth set, but were outhit by Illinois on a .310 clip. Illinois also out-blocked Colorado 12-7.

Four Colorado players posted double-figure kills in Smith with 19 kills and 12 digs, Abu with 15 and a .619 clip, Frankie Shebby with 14 and Anna Pfefferle with 11.

Illinois’ offense was led by Beth Prince, who had a career high 25 kills on a .321 hitting percentage. Jacqueline Quade and Ali Bastianelli posted 17 and 14 kills, respectively.

Colorado and Illinois are now 4-4 all time against each other. The Buffs have defeated Illinois the past two meetings in extra points in the fifth set.

CHAMPAIGN, Ill. — Colorado improved to 7-1 this season after defeating Illinois, 3-2, in a five-set thriller on the second day of the Pac-12/Big Ten Challenge.

WHAT HAPPENED: Four Buffs recorded double-digit kills in the victory. Alexa Smithtallied a season-best 19 kills, while Naghede Abu had 15 kills with a match-high .619 hitting efficiency with just two errors on 21 attacks. Frankie Shebby had 14 kills and Anna Pfefferletallied 11 kills. Pfefferle also hit quite well (.500) with two errors on 18 swings.

Colorado’s defense was also spread out with three Buffs recording 10 or more digs. Gabby Carta-Samuels led the Buffs with 17 and Brynna DeLuzio recorded a career-high 15 digs. Smith had 12 digs to record her second double-double this season. At the net, Abu posted six block assists and Joslyn Hayes added three block assists to go with her eight kills.

SET 1: Illinois took the lead to start the match. The Illini were up by five at 16-11 when the Buffs started to make their comeback, recording an 8-3 run that would tie the set at 19-19. UI took a timeout at that point and was able to take the next point, but CU responded with a kill from Shebby. The set would be tied up again at 21-21 and 23-23 before Hayes took matters into her own hands with a pair of kills, helping CU to the 25-23 set victory.

SET 2: CU took the first point to start the set, but UI took the next three for the early lead. Once again the two sides played a close set with UI leading by five at 15-10. The Buffs mounted another comeback late, tying the game at 19-19, 20-20, 22-22 and 23-23. Illinois got to set point (24-23) after a kill, but a service error evened the set for the ninth time. The Buffs were unable to capitalize on UI’s error and the Illini took the next two points to win the set 26-24.

SET 3: With the first two sets staying so close, it was no surprise the third set was more of the same. The game had 14 ties and five lead changes, but it all worked out for CU, which came away with a 28-26 victory. The Illini had set point at 26-25 when Smith hammered a kill to even the score. A pair of attack errors by the Illini sealed the set victory for the Buffs.

SET 4: Illinois got out to a quick start in the frame, going up 13-6 before the Buffs called their first timeout of the set. CU struggled to get much going and the Illini extended their lead to 17-8, at which point the Buffs took their final timeout of the set. Pfefferle hammered a kill out of the break, but UI took the next two. Despite a valent effort to rally, CU fell 25-12.

SET 5: Both teams played a close set with five ties near the beginning before the Buffs took a 9-6 lead, causing the Illini to take a timeout. CU recorded a block on the next point from Abu and Shebby, but UI was not going to back down and came back to even the set at 13-13. CU went up on the following point with a kill from Smith, but UI earned a kill of its own (14-14). CU had another match point after an attack error by the Illini, but again the set would be tied at 15-15 after an UI kill. The Buffs decided they had enough, and won the match with kills from Abu and Smith.

NOTEABLE: The all-time series between CU and UI is now tied at 4-4. This is the second straight year CU has defeated the Illini in the Pac-12/Big Ten Challenge and it’s also the second straight year the match went to five sets…CU won the meeting in 2016 with a five set score of 19-17…The Buffs are now 3-3 all-time in the Pac-12/Big Ten Challenge… Both teams played extremely well in the final set, hitting .500. Abu was a huge factor for CU with five kills on five attacks…CU is now 2-0 on the road this season.

NEXT UP: The Buffs return go Colorado for the final weekend of non-conference action. CU will host Xavier at 7 p.m. on Sept. 15 and on Sept. 16, CU will head to Fort Collins, Colo. to face Albany and Colorado State.

QUOTES:
Head coach Jesse Mahoney
“This was a big-time win on the road for our team early in the season and something we can build on. We were behind four of the five sets, but found a way to win when it mattered. Our middles Anna and Naghede were huge for us making plays in set five.”

CHAMPAIGN, Ill. – The Illinois volleyball team received career-high performances from redshirt-sophomore Beth Prince and junior Jordyn Poulter, but it was not enough as the Illini dropped a five-set heartbreaker (23-25, 26-24, 26-28, 25-12, 15-17) to Colorado in the Big Ten/Pac-12 Challenge on Saturday (September 9) afternoon in Huff Hall.

Prince registered a career-high 25 kills on a .321 hitting percentage, while Poulter notched her second double-double of the season and 12th of her career with a career-high-tying 60 assists and 19 digs.

Defensively, senior Brandi Donnelly posted her 27th career 20-dig performance with 22 against the Buffs (7-1), with freshman Morgan O’Brien totaling a season-high 15 digs on the day.

As a team, the Illini hit at a .310 percentage, including a .483 clip in the fourth and a .500 mark in the fifth set, and out-blocked their opponents for the eighth-straight match, 12.0-7.0. Junior Blayke Hranicka turned in a team-high six blocks to lead the team, while Bastianelli and freshman Megan Cooney added five each.

In a tightly contested match that saw all but one set decided by two points, the Illini (6-2) and Colorado traded punches as the Buffs opened with a 25-23 win in the first, before UI evened things with a 26-24 set two win capped by a Poulter and Hranicka block.

It was another close set in the third with the Buffs fighting off four Illini set points, before back-to-back Illini hitting errors put Colorado up 2-1 in the match.

It was all Illini in the fourth as the Illini jumped out to an early 10-4 lead and continued to hold the edge with a Prince kill pushing the lead to its biggest of the set at 19-9. Back-to-back Prince kills then finished off the comeback with 25-12 set win to force a decisive fifth set.

Both teams traded points to start the final set, but four-straight Buff points broke a 6-6 tie for the 10-6 Colorado advantage. The Illini continued to battle, before drawing level at 13-13 on a Prince attack. With the score tied at 15-15, back-to-back Buff kills sealed the 3-2 win for the visitors.

The Illini wrap up tournament play next weekend at the Dr. Mary Jo Wynn Invitational on September 15-16 in Springfield, Mo., taking on Chattanooga, Tennessee State and host Missouri State in the two-day tournament.