Brazil Rallies from Down 2-0 to Top Columbia, Mexico Sweeps Argentina 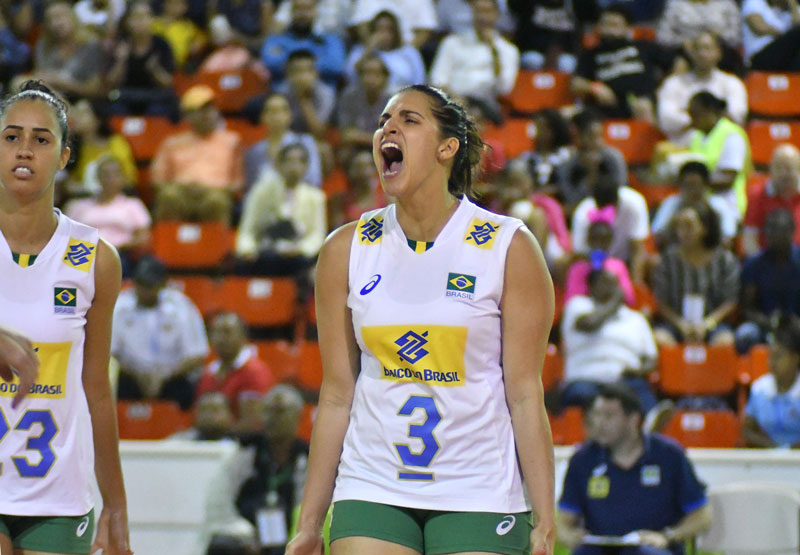 After falling behind 2-0, Brazil rallied for a five-set win over Columbia to remain atop Pool C, while Mexico won every statistical category in a sweep of Argentina to wrap up Day 2.  Current Photo via NORCECA

After falling behind 2-0, Brazil rallied for a five-set win over Columbia to remain atop Pool C, while Mexico won every statistical category in a sweep of Argentina to wrap up Day 2.

The Brazilians overcame 35 errors in the match thanks to a 63-55 lead in kills, a 20-11 advantage in blocks and a 4-2 edge in aces. Columbia stayed in the match by limiting its errors to 20.

“It was a tough match,” Brazilian coach Wagner Fernandes said. “Colombia has been working to get better. We are going to suffer because we only trained for four weeks and during the matches I have to look for the ideal team. Today Fernanda did a good job coming off the bench.”

“We are showing evolution as part of a process,” Columbia coach Antonio Rizola said. “We couldn’t close due to inexperience. Brazil has many players with international experience in age group tournaments and during the match they were able to adjust to our game. That was the key.”

With help from 28 Argentine errors, Mexico registered a sweep to move to 1-1 in Pan American Cup action.

The Mexicans also boasted a 33-25 lead in kills and 7-2 advantage in blocks. Both teams managed seven aces.

“We never thought about a 3-0 victory,” Mexican coach Ricardo Ponce said. “We prepared the match to play against a strong rival with a lot of experience. Playing point by point was important to keep the focus.”

“We are playing below our level. Yesterday for two sets we were close to it,” Argentine coach Guillermo Orduna said. “We need to keep working and find out the reasons for this kind of performance. It looks to me like lack of confidence.”