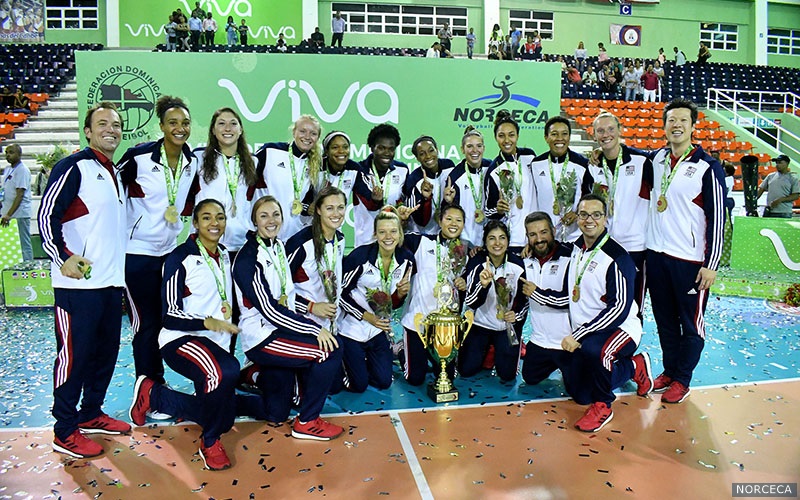 The United States won its second straight Pan American Cup title, outdoing the Dominican Republic for the second year in a row, rallying for a five-set win. Canada rounded out the podium, taking bronze with a sweep of Brazil. Current Photo via NORCECA

The United States won its second straight Pan American Cup title, outdoing the Dominican Republic for the second year in a row, rallying for a five-set win.

Canada rounded out the podium with a sweep of Brazil on Saturday, picking up the country’s second Pan Am Cup medal in tournament history, following  a bronze in 2002.

After falling behind 2-0, the United States won three straight sets to claim a five-set win and the Pan American Cup gold medal on Saturday.

“It took us two sets to adjust our game,” American coach Jon Newman-Gonchar said. “Once we slowed down their two strong attackers, we applied U.S. pressure and finished the job. I am very proud of successfully defending the crown.”

In Set 1, the Americans trailed 11-7 early, but grabbed a 19-18 edge before falling in extra points.

The teams split the first 28 points of Set 3, before the Americans scored seven of the next nine points en route to a 25-21 win.

The United States used a 12-3 run to build a nine-point lead at 14-5 midway through Set 4 before sending the match to a decisive fifth set with a 25-19 victory.

Once in tiebreak, the USA jumped ahead 6-2 and held on for the 15-8 win and the event title.

“I am excited after this huge victory achieved with confidence and energy. It was a team effort and I think we can beat anyone in the world,” Canadian captain Megan Cyr said. “This victory is a confidence builder.”

Bruna Marques was the top scorer for Brazil with 10 points on nine kills and an ace. Maira Cipriano Claro was next with six points on four putaways, a block and an ace. Five players added three points each to round out the scoring. Mara Ferreira Leao and Francynne Jacintho tallied two blocks apiece.