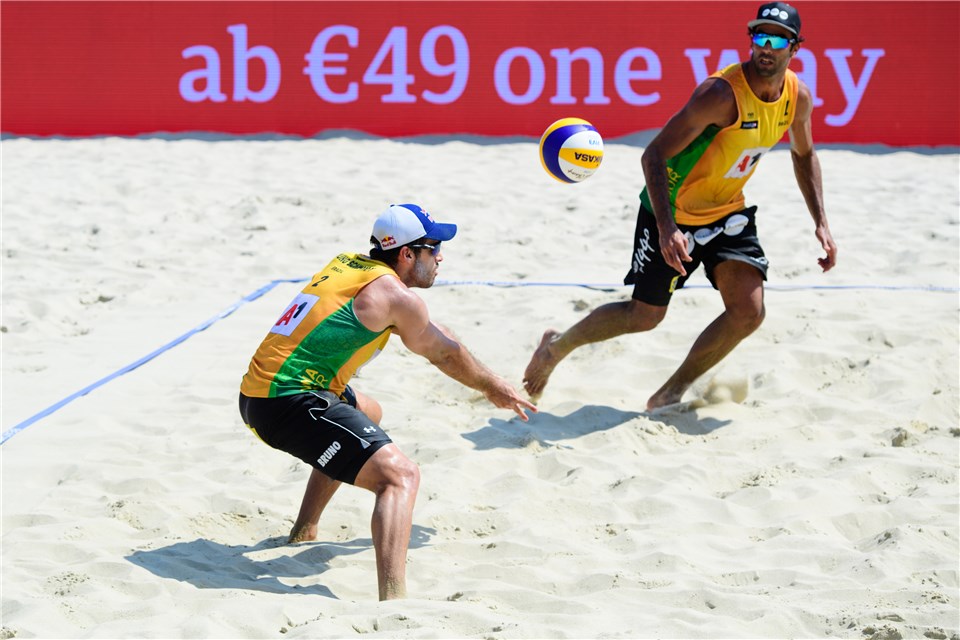 Brazilian pair Pedro Solberg/Bruno Schmidt, which has its sights set on qualifying for the 2020 Tokyo Olympics, have enlisted the help of a coach who has been there before, Leticia Pessoa. Pessoa has coached her previous charges to three Olympic silver medals. Current Photo via FIVB

After announcing their partnership in late May, Brazilians Bruno Schmidt/Pedro Solberg Salgado competed in five FIVB events, including two Majors, finishing as high as fifth at the Vienna Major on August 5.

The duo, which has its sights set on qualifying for the 2020 Tokyo Olympics, have enlisted the help of a coach who has been there before, Leticia Pessoa. Pessoa has coached her previous charges to three Olympic silver medals: Adriana Brandao Behar/Shelda Kelly Bruno Bede in both Sydney (2000) and Athens (2004) and Alison Cerutti/Emanuel Rego in London (2012).

“I consider myself a very lucky person, always paints a good opportunity for me,” Pessoa told globosporte.com. “I see myself better prepared and motivated to give my utmost. Bruno and Pedro are two very skilled, very regular guys. And the fact that you think of me is a sign that I’m going to have to give you another gas. I’ve very happy, very happy indeed. Let’s fight for our vacancy.”

Bruno and Pedro previously worked with Pessoa back in 2013, when she was the technical coach of the Brazilian beach volleyball team. She worked with Brazilian women’s standouts Agatha Bednarczuk/Eduarda ‘Duda’ Santos Lisboa until June.

Bruno is excited to be reunited with Pessoa.

“We want to reinvent that team of 2013, that team that went well back there,” Bruno said. “With the increase of Leticia, a victorious technique, which has experienced a lot of situations, we have everything to work out. She can take the pressure. She likes the pressure, just like me and Pedro.”

“Leticia really wants to get to that next Olympics, the same way we do,” Pedro said. “Our goals are very similar and that is the basis of any work. I’m very excited. I think our team is very experience, very technical.”

The new team will make its FIVB debut at the Yangzhou Four Star in China, Oct. 10-14.