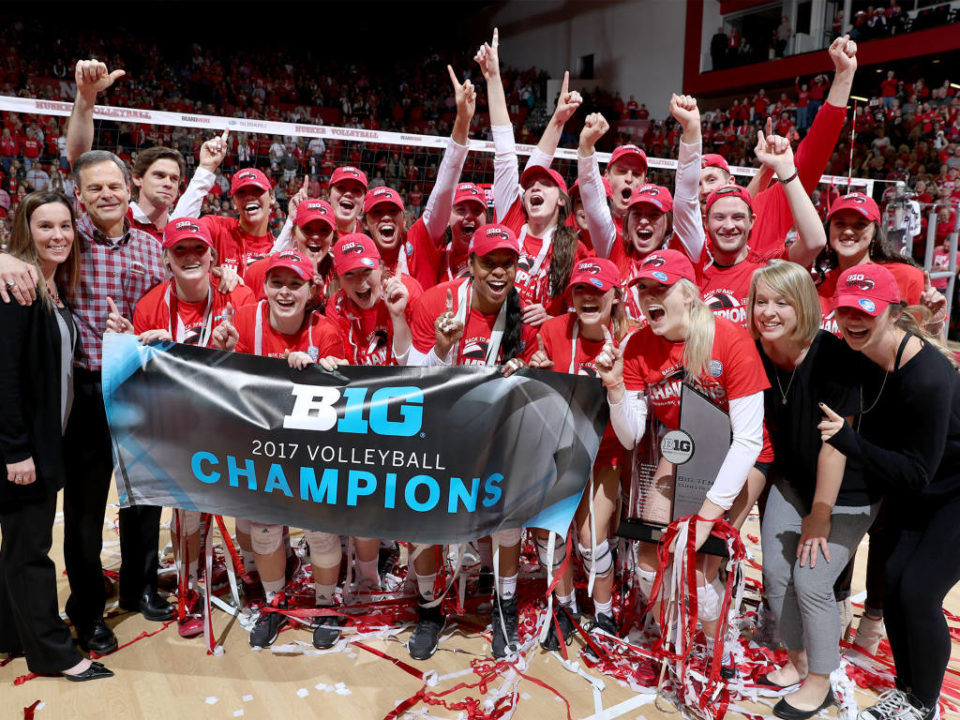 Nebraska clinched their share of the Big Ten title on Saturday with a 3-0 sweep over Iowa, giving themselves something else to celebrate besides senior night. This makes the 2nd-straight Big Ten title for the Huskers, and their 3rd overall since joining the conference in 2011.

In total Nebraska has 34 conference titles across the Big 8, Big 12, and Big Ten conferences. They share this year’s title with Penn State, who did their part with a big win over Minnesota on Saturday. This is also Nebraska’s 36th-consecutive appearance in the NCAA tournament.

Besides setting a team-best for wins in Big Ten Conference play (19), they also gave up just 11 sets this season against conference opponents – the fewest since 2010: their final season in the Big 12.

“If you had asked me in August if we would be having this conversation tonight, I’m not sure I would have believed you,” Nebraska head coach John Cook said. “But I started getting hope on the first day of practice when they did the presentation (of the team slogan ‘With Each Other, For Each Other’). I felt like this group had something special, and I think they have really played great as a team. To do what they’ve done over 10 weeks and not have mess-ups and bad nights, and continue to believe through the whole thing is an incredible accomplishment.”

Mikaela Foecke, who has been the biggest plug to fill the hole left by graduating seniors, led Nebraska offensively as she has most of the season with 15 kills on .400 hitting. She also chipped in 3 block assists and 6 digs, with a match-high 16.5 total points.

Those blocks were part of an overall 10.5-6 advantage in that category for Nebraska, led by 8 from senior Briana Holman – who also had 10 kills and hit .571. Fellow senior Annika Albrecht just missed a double-double with 9 kills and 10 digs.

Nebraska got just 5 digs (though also 6 assists) from their libero Kenzie Maloney – with 3 of her teammates actually exceeding her total in that category. When he had the nation’s best libero, Justine Wong-Orantes, Cook said that she convinced him that the position had value altogether. This year, after her graduation, however, Cook has gone away from using that position as much.

Iowa hit just .067 as a team in the match with 28 kills and 21 errors, including 4 players with a negative hitting percentage. Taylor Louis was a bright spot, though, with 14 kills (.235 hitting percentage) and 2 blocks.

The match was the 234th consecutive regular-season home sellout for the Huskers, who will learn their NCAA tournament fate on Sunday evening live on ESPNU. Though Nebraska holds the tie-breaker as the automatic bid out of the Big Ten, Penn State’s overall resume gives them a better shot at a #1 seed.

Iowa was ranked 46th in RPI coming into the weekend, and an 0-2 finish to the season won’t help their NCAA tournament cause. While post-season comments from head coach Bond Shymansky remained hopeful of an invite, that seems unlikely at this point.

In case you missed this huge kill by @_Shinola early in Set 1‼️#Huskers pic.twitter.com/YJfV4A3pkP

LINCOLN, Neb. — The University of Iowa volleyball team fell, 3-0, to No. 5 Nebraska on Saturday night at the Devaney Center.

HOW IT HAPPENED
Set 1 (12-25) | The fifth-ranked Huskers jumped out to an early lead and never trailed, taking a 1-0 match advantage.

Set 2 (15-25) | The Hawkeyes took a quick 4-2 advantage, but the Huskers responded and knotted the match at 7-7. Nebraska then scored three consecutive points to take the lead en route to a 2-0 match advantage. Louis led Iowa with four kills.

Set 3 (23-25) | The Hawkeyes found a rhythm in the third set. With the score tied 23-23 after a tightly fought set that saw 13 ties and seven lead changes, Nebraska scored back-to-back points to close out the set and finish the 3-0 match victory. Louis recorded eight kills for the Hawkeyes.

HEAR FROM COACH SHYMANSKY
“We came into the locker room between sets two and three and I told the team we needed someone to start a fire, and the hitters need to become killers, and Taylor Louis stepped up and did it. I thought she was phenomenal in that third set and our team followed. The grit and the grind of the back row — they continue to anchor us as a passing group — was really impressive. I thought that third set was a really great comeback. It showed a lot of guts for us to not just go away, but to fight all the way to the end of that match. That’s what Hawkeyes do. I know our team is doing everything we can do put ourselves in a position to get into the NCAA Tournament. We know we are going to have to win on the road in the tournament, so now we sit and wait.”

UP NEXT
The Division I NCAA Women’s Volleyball Championship selection show is Sunday at 8 p.m. (CT) on ESPNU.