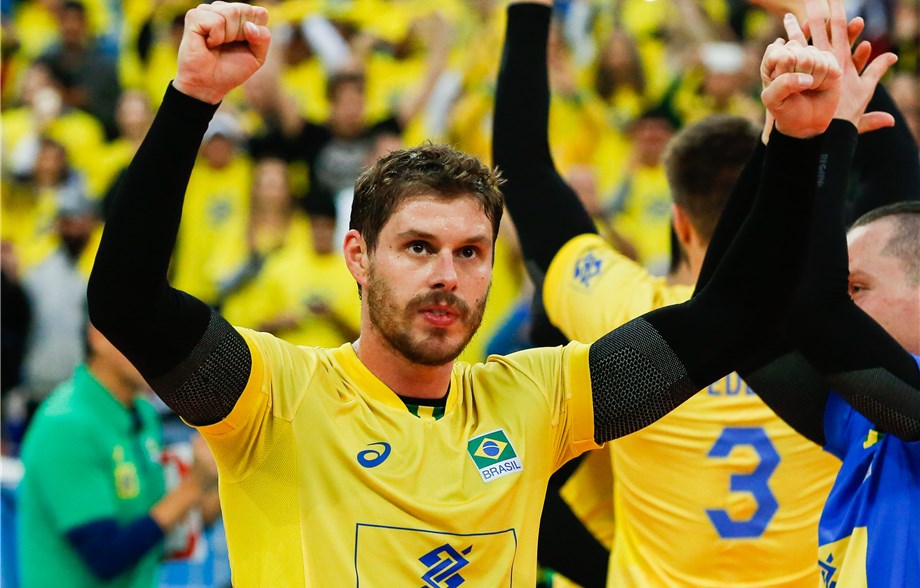 Bruno Rezende left the match early in a 0-3 defeat to France on Saturday. Little is known about his injury status heading into Sunday's important match with Bulgaria. Current Photo via FIVB

For the second day in a row, Brazil was overwhelmed by their opponents and lost 0-3. France utilized Earvin N’Gapeth, Kevin LeRoux (making his Volleyball Nations League debut), and Stephen Boyer as they looked to remain on top of the standings. Using several players from what would be their strongest team worked out for the French in their commanding victory.

Brazil was thrown off of their rhythm the entire match. Wallace De Souza was the only Brazilian player to score in the double digits with 10 points. Four players in the French lineup outscored Wallace and the dominating performance left Brazil in 5th place by the time the day was over.

In addition to dropping from three places in the standings (they will need to finish in 6th place to advance to the Final Round), Brazil also had a concerning moment involving their setter, Bruno Rezende. Just before the 2nd technical timeout in the last set, Bruno tracked a pass just outside the three meter line and performed a jump set out to the left antenna. While noting seemed unusual about the landing, Bruno was slow to return to his defensive position at the net. He even refrained from attempting to block. He was unable to track a pass behind him on the next point and left the match.

Little is known about Bruno’s status and eligibility for the final match of the weekend against the host country of Bulgaria. A report out of Brazil stated that he was replaced by  William Arjona due to his inaccuracy and poor decisions. Bruno was not tended to by the training staff immediately after he left the court. Another Brazilian preview for the upcoming match against Bulgaria did not mention an injury to Bruno either. Was he injured or just frustrated by a poor performance when he made his early exit?

Brazil may not be sharing much about Bruno’s fitness ahead of the final match of the weekend. One must also take note that William may start due to the fact he is a top-notch setter, even if he is a backup. While Brazil did not play the last few matches with a sense of urgency, they are in a situation where they need to get a victory heading into the final week.

They will face Poland, Australia, and Argentina next weekend in Melbourne, Australia. On paper they should come away with at least a pair of wins. That would set them up nicely to qualify for the Final Round in Lille, France. It would be much more comfortable traveling to Australia already within the top 6 and in position to qualify than having to win and hope to jump over teams in front of them. This makes the match against Bulgaria quite important.

Whether Bruno is injured or able to play, they will be in capable hands on Sunday. They may choose to start William over a healthy Bruno. William has experience in important matches. He has started a number of matches this tournament, and he came into the match against the United States when they were down 0-2 before leading them to victory. Odds are we will not et any information from the Brazilian camp until the lineups are announced on Sunday.