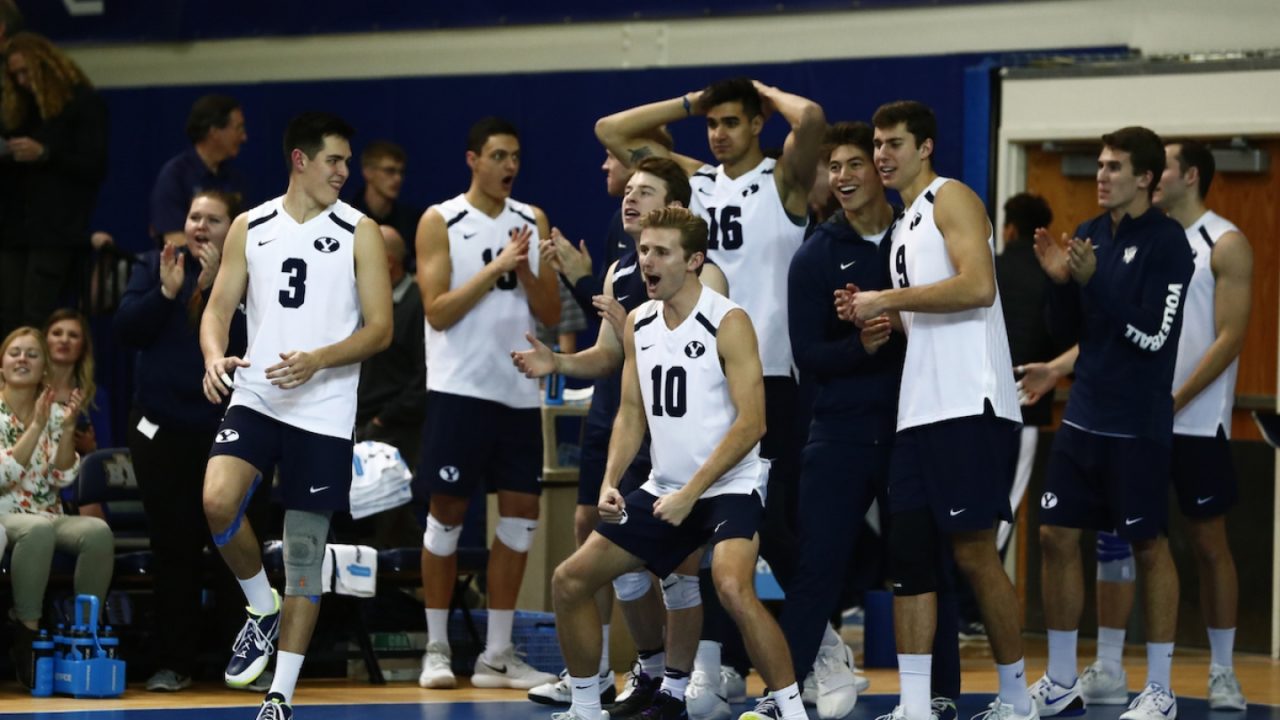 Twelve blocks and an efficient offense lifted No. 6 BYU past No. 3 Ohio State on Saturday night in a rematch of the 2017 NCAA title match. Current Photo via BYU Athletics

COLUMBUS, Ohio – Twelve blocks and an efficient offense lifted No. 6 BYU past No. 3 Ohio State on Saturday night in a rematch of the 2017 NCAA title match.

Senior outside Maxime Hervoir (20), senior outside Nicolas Szerszen (19) and redshirt freshman opposite Jake Hanes (10) turned in double-digit kill efforts for the Buckeyes, while Hervoir and Szerszen hitting .369 and .361 respectively. Redshirt junior middle Blake Leeson chipped in nine kills on a .692 hitting effort (9-0-13). Szerszen served up three aces, while Hervoir and junior setter Sanil Thomas notched two apiece, but it was not enough.

Ohio State hit at an eye-popping .750 clip, downing 18 kills and no errors in 24 swings. BYU, however, outdid the Buckeyes the rest of the way.

The Buckeyes broke away midway through Set 1 with a 6-2 run, including two kills each by Szerszen and Hervoir, to make it 16-11. BYU rallied to within two at 20-18 and 21-19, including an ace by Storm Fa’agata-Tufuga. OSU wrapped up the set with four of the final six points, the last on a Leeson putaway.

BYU raced out to a 9-5 lead in Set 2 with kills by four different players and an ace by Sander. The Buckeyes cut the margin to one at 13-12, but the Cougars countered with a 9-3 run. Fernandez turned in two kills and a block, while three others notched putaways. A service error put BYU on the hill at 24-19. A service error three points later evened the match with a 25-21 Cougar win.

The teams tied seven times in the early stages of Set 3. Jarman downed two kills to put BYU up 11-7. Ohio State was within one four times, last at 20-19, before the Cougars closed out the 25-20 victory with kills by four different players, the last by Sander.

After splitting the first 30 points of Set 4, Ohio State pulled away with eight of the next 10 points. Hervoir and Leeson tallied two kills apiece and Thomas served up two aces as the Buckeyes took a 23-17 lead. Jarman and Sander combined for a 3-0 BYU run. A service error made it 24-20 OSU and a Hervoir kill clinched the 25-21 win and sent the match to the fifth set.

“This was a fun match to be a part of from start to finish,” BYU head coach Shawn Olmstead said. “I’m proud of how the team responded after the first set to come back and get the win.”

BYU (3-1) collected the first three points of the decisive fifth set from Fernandez and Sander kills and a Fernandez ace. Ohio State (2-1) quickly evened the score at 4-4, however, following a block. The Cougars again took the lead at 10-5 following a 5-0 run, before running away with the set and match 15-8.

Ohio State jumped out to a 7-4 lead early in the first set after a BYU attack error. A Fernandez ace brought the Cougars back within a point, down 10-9, but the Buckeyes scored six of the next eight points to go up by five, 16-11. A slew of Ohio State service errors kept BYU in the set as a 4-1 Cougar run brought BYU back within two, 20-18, forcing a timeout from the Buckeyes. Ohio State quickly regrouped, winning 25-21 after hitting .739 for the set.

Back-to-back Fernandez kills gave the Cougars a 2-1 edge to start the second set. Kills from Durkin and Sander then increased the BYU lead at 7-4. The Cougars led by as many as four, 10-6, before the Buckeyes got within a point, 13-12, on an ace. BYU rattled off the next three points, capped off by a Jauhiainen and Fernandez block, to take a 16-12 lead. Ohio State took its final timeout of the set before the Cougars jumped ahead 23-16. The Buckeyes scored the next three points, but BYU took the set 25-21 on an Ohio State service error.

A Fernandez block and kill pushed the Cougars ahead 6-5 at the beginning of the third set. That was followed with a 5-0 BYU run to put the Cougars up 11-7. A kill from Sander kept BYU in front 17-13 and then again at 19-16, but the Buckeyes rallied to get within a point, down 19-18. Kills by Andrew Lincoln and Fernandez made it 22-19, and a Sander kill ended the set 25-20 for the Cougars.

The fourth set opened up tightly contested as a trio of Fernandez kills gave BYU a 6-5 edge. A Durkin and Jarman block put the Cougars up 10-9, and an Ohio State attack error made it 15-13. The Buckeyes then went on a 6-0 run to take a 19-15 advantage before ultimately taking the set 25-21, forcing the decisive fifth set.

The Cougars return home to the Smith Fieldhouse next, facing Barton on Friday, Jan. 19, at 7 p.m. MST.

Maxime Hervoir and Nicolas Szerszen combined for 39 kills, attacking .359 and .351, respectively. Blake Leeson finished as the squad’s most efficient offensive weapon at .692 with nine kills on 13 error-free attempts. Defensively, Aaron Samarin’s nine digs paced all players in the match.

While Ohio State recorded 11 more kills than the Cougars, a 12-3 BYU blocking edge paired with the aforementioned Buckeye serving gaffes erased the kills advantage. Both high-powered offenses attacked at a high rate through the first four sets before defensive prowess prevailed in the fifth and final frame.

SET 1: Ohio State overcame 11 service errors by attacking .750 (18-0-24) in the opening set. Hervoir and Szerszen led the way with six kills apiece and Jakes Hanes wasn’t far behind at four kills. After terminating all four attacks in Friday night’s fourth set, Hanes did the same in this 25-21 triumphant first frame.

SET 2: The final tally remained the same in set number two, but flip-flopped sides of the scoreboard. BYU went ahead for good early at 4-3 and never relinquished the upper hand en route to a 25-21 winner of their own.

SET 3: Despite five kills each from Hervoir and Szerszen in the third, Ohio State fell back two sets to one on a 25-20 downer. BYU jumped ahead for good at 8-7 this time around.

SET 4: The night’s most highly-contested set came next, evidenced by 13 tied scores and four lead changes in the fourth. Ohio State limited the self-inflicted damage at the stripe to three serving errors and out-dug BYU 11-6. Tied 15-15, Sanil Thomas stepped to the line and delivered a sensational serving performance. After the first of two aces, he unleashed two more lasers which the Cougar libero could only muster an overpass right in the direction of Leeson. The Buckeye middle blocker cranked both balls to the ground. Thomas then came back and ripped the other ace. Both aces were timeout-triggering plays for BYU as Ohio State flew past BYU 19-15. An Hervoir kill would seal the deal moments later, 25-21 for the Scarlet & Gray.

SET 5: BYU came out guns blazing in the fifth, securing the first three rallies. Ohio State countered immediately with three consecutive points of their own, however. The ledger remained even at 5-5 before the Cougars sprinted to a 10-3 match-clinching run.

Ohio State gets back it next week, venturing west to participating in the third annual Big Ten-Pac-12 Challenge. The Buckeyes will take on No. 12 USC Thursday (Jan. 18) night on the campus of UCLA. The No. 3 Bruins await Ohio State on Saturday (Jan. 20).