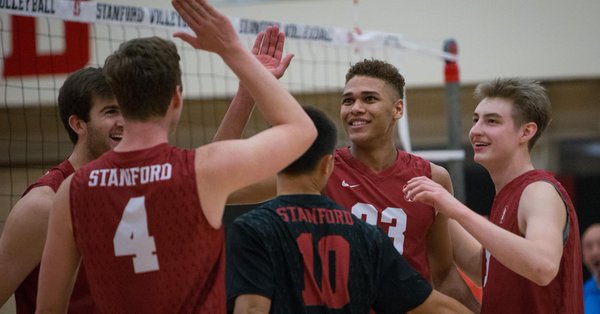 Saturday brought a pair of Top 20 upsets as No. 6 BYU edged No. 3 Ohio State in a rematch... Current Photo via Stanford Athletics

Saturday brought a pair of Top 20 upsets as No. 6 BYU edged No. 3 Ohio State in a rematch of the 2017 NCAA Championship and No. 18 Stanford swept No. 12 Ball State for its first win of the season.

No. 10 Penn State and No. 14 Grand Canyon, meanwhile, made quick work of their foes.

Key Statistics: Grand Canyon made just a handful of errors and outdid Limestone in every statistical category en route to a sweep Saturday and a 5-0 mark on the season.

Senior outside hitter Anthony Savage turned in a match-high seven kills, but hit just .050. Savage was the lone Limestone player to post a positive hitting effort and also accounted for the team’s only ace.

It Was Over When: GCU scored six-straight points, including four Limestone miscues and a Melcher/Blazer block, to go up 9-4. The Lopes boosted the advantage to 14 at 20-6 as Mosher added two kills and a block and Melcher turned in two putdowns and two stuffs. A service error offered a brief pause, but Grand Canyon finished off the sweep with a 5-1 run, including two Limestone errors. A kill and an ace by Mosher capped the 25-8 win.

Key Statistics: Stanford outhit the homestanding Cardinals .245 to .066, despite being outblocked 11-8. The Cardinal outdid BSU 5-2 in aces and notched 13 more kills (40-27) en route to their first win of the season.

Stat Leaders: Freshman outside Jaylen Jasper paced Stanford with 17 kills on a .382 hitting effort and three aces. Sophomore outside Eric Beatty was next on the team with five putaways. Redshirt senior middle Kevin Rakestraw led the way at the net with five stuffs. Sophomore setter Paul Bischoff posted a 30-assist, 10-dig double-double.

Sophomore outside Blake Reardon was tops among Ball State players with seven kills, while senior outside Mitch Weiler and sophomore outside Matt Szews followed with five apiece. Eight players tallied kills in the match with six notching two or more. Senior middle Anthony Lebryk put up a match-high six blocks, while Weiler pulled up nine digs.

It Was Over When: Up just three at 17-14, Stanford put together a 4-1 run, including kills by Paul Bischoff, Jaylen Jasper and Kyler Presho. Ball State scored four of the next six to narrow the gap to four at 23-19, with help from three Cardinal miscues. A Jasper putaway put Stanford on the hill at 24-19. A service error kept the match going, but a Leo Henken kill closed out the sweep.

The Nittany Lions also outserved the Battlers 7-1 and outdid them 35-24 in kills. Alderson Broaddus outblocked PSU 6.5 to 5.

It was Over When: Penn State jumped out to a 15-6 start in Set 3 with help from six AB errors. Two blocks by Kevin Gear and two aces by Calvin Mende also aided the Nittany Lion effort. The Battlers cut the margin to seven three times, last at 18-11, but could not break through. Three more Alderson-Broaddus miscues put Penn State up 10 at 22-12 and put the match out of reach. A Frank Melvin putaway made it 24-14 and a service error capped the sweep two plays later.

Key Statistics: Twelve blocks and an efficient offense lifted No. 6 BYU past No. 3 Ohio State on Saturday night in a rematch of the 2017 NCAA title match. BYU outhit OSU .371 to .333 and outblocked the Buckeyes 12-3 to overcome a 64-53 deficit in kills and a 7-5 Ohio State lead in aces. Ohio State hit at an eye-popping .750 clip, downing 18 kills and no errors in 24 swings. BYU, however, outdid the Buckeyes the rest of the way.

Senior outside Maxime Hervoir (20), senior outside Nicolas Szerszen (19) and redshirt freshman opposite Jake Hanes (10) turned in double-digit kill efforts for the Buckeyes, while Hervoir and Szerszen hitting .369 and .361 respectively. Redshirt junior middle Blake Leeson chipped in nine kills on a .692 hitting effort (9-0-13). Szerszen served up three aces, while Hervoir and junior setter Sanil Thomas notched two apiece, but it was not enough.