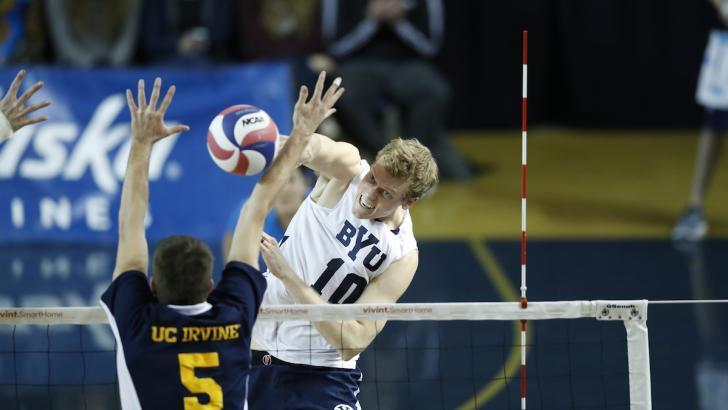 BYU piled up 12 team blocks, holding Hawaii to just a .188 hitting percentage. Brenden Sander led offensively with 14 kills, and Jake Langlois had 13 plus a team-high 5 digs. Hawaii’s Stijn van Tilburg had a game-high 16 kills in a losing effort.

BYU is one of two one-loss teams in the MPSF along with Long Beach State. Hawaii could have dropped BYU into a tie at 2 conference losses apiece, but now sit solidly third in the MPSF at 10-3.

PROVO, Utah – Behind a season-high 12 blocks in three sets, No. 3 BYU men’s volleyball swept No. 4 Hawai’i in a key Mountain Pacific Sports Federation matchup at the Smith Fieldhouse Friday night.

“Our guys did a lot of good things,” BYU head coach Shawn Olmstead said. “Our assistant coaches did a really good job putting a game plan together, and we executed it well. I thought we took good swings, in transitions especially. We really made smart shots. They are a good team.”

The first set was a battle as neither team led by more than two points the whole way through. After trailing by one or tying for the first part of the set, Tim Dobbert’s kill and a block by Grosh and Langlois put BYU up 10-8. The Rainbow Warriors kept the slight advantage for most of the set until Dobbert had another clutch kill, making it 22-21 in favor of the Cougars. It took extra points to finish the set, but back-to-back kills from Sander and Langlois sealed the 28-26 win for BYU.

The Cougars kept the momentum into the second set with Langlois getting two kills right off the bat to earn the early 2-0 lead. To get the first lead of more than two points, Langlois drilled the ball for the 5-2 advantage. It was all BYU from there on out. The Cougars’ biggest lead came after Sander and Grosh teamed up for a block, making it 20-13. Miki Jauhiainen drilled an overpass kill for the 25-18 victory.

The intensity picked back up in the third set. An ace from Grosh put BYU up 3-2 early on. A 3-0 run highlighted by two kills from Sander pushed the Cougars’ lead up to 7-4. The Rainbow Warriors battled back, going on a 5-1 run to take a 15-14 lead. However, BYU responded with a 4-0 rally, led by a pair of stuff blocks, to get back up, 20-17. Durkin sealed the sweep with a solo block on match point, taking the final set 25-20.

The two teams will face off again Saturday, March 18, at the Smith Fieldhouse. The game will begin at 7 p.m. MDT and will air live on BYUtv. Live stats will also be available on the BYU men’s volleyball schedule page.

PROVO, Utah – The University of Hawai’i men’s volleyball team saw several streaks come to an end in a straight-set loss to No. 3 BYU Friday in a Mountain Pacific Sports Federation match-up at Smith Fieldhouse. Set scores were 28-26, 25-18, 25-20.

UH, which entered the match third nationally in hitting percentage, hit for a season-low .188 for the match.  The nation’s leader in blocking also produced only four team blocks, compared to 12 for the Cougars.

In a tight first set, the Warriors took a two-point lead at 18-16 following a double-block by Mol and Fey. Moments later, the Cougars answered with three straight to regain the lead at 22-21. The teams sided out with the Warriors erasing three set points before Langlois ended it with his fourth kill at 28-26.

Langlois used his serving and a pair of aces to frustrate the Warriors early in Set 2 as the Cougars built a 9-4 lead. That would be enough of a cushion as UH got no closer than four points the rest of the way in part to .083 hitting in the set.

In Set 3, the Warriors erased a four-point deficit with an 8-2 run to take a 16-14 lead. The Cougars answered back with a 6-1 run, including four unanswered – three by way of UH hitting errors – for a 20-17 lead. After a van Tilburg kill, BYU put the match away with a kill by Joseph Grosh and a Brett Rosenmeier hitting error. Fittingly, van Tilburg hit into a double block to end the match.