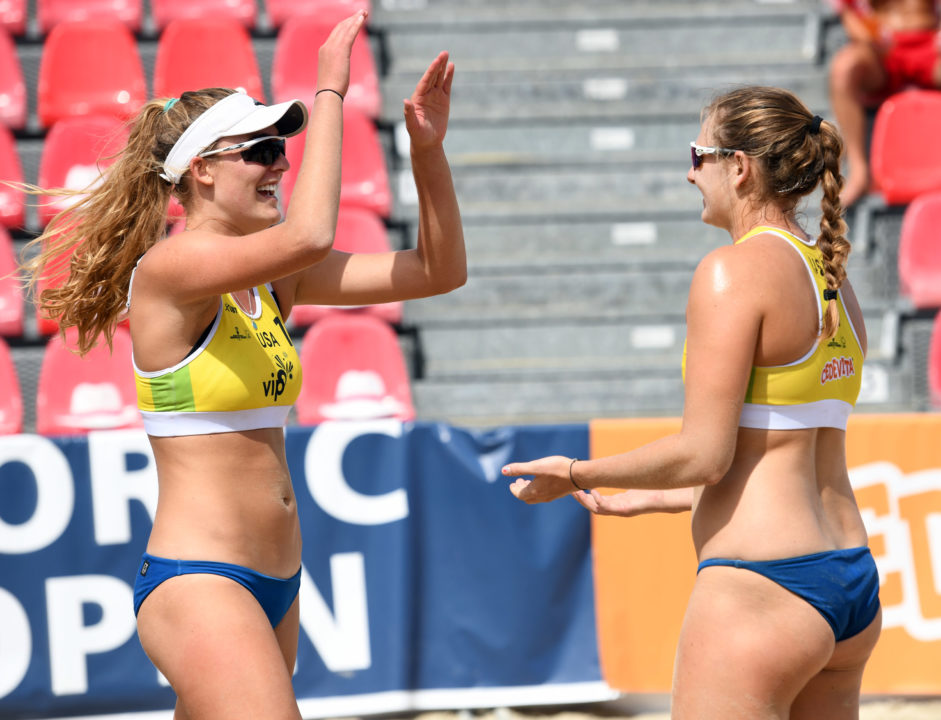 American pair Emily Sonny/Torrey Van Winden will have its first shot at FIVB gold on Sunday morning, vying for the Porec One Star title.  Current Photo via FIVB

American pair Emily Sonny/Torrey Van Winden will have its first shot at FIVB gold on Sunday morning, vying for the Porec One Star title.

The Cal Poly beach pair will face Ukraine’s Inna Makhno/Iryna Makhno in the championship match at 10 a.m. ET after beginning their journey in Thursday’s qualifying rounds. The gold medal match is a rematch of the pairs’ first Pool C contest, which Sonny/Van Winden won in straight sets (21-18, 21-13).

The American pair won two qualifying matches and claimed the Pool C title with two more wins on Friday, earning a free pass to the quarterfinals. Once there, Sonny/Van Winden kept things rolling with a straight set win over Austria’s Anja Dorfler/Stephanie Wiesmeyr.

Early Sunday morning, the pair squeaked past Konstantina Tsopoulou/Dimitra Manavi of Greece in tiebreak (19-21, 21-10, 15-9) to set up the championship match.

Wutzl/Fruhbauer are looking for their first gold since winning the Langkawi One Star on April 29. Meanwhile, either the gold or silver will mark the best ever finish for the Ukrainians, which have never finished higher than fifth (Alayna One Star on June 3).