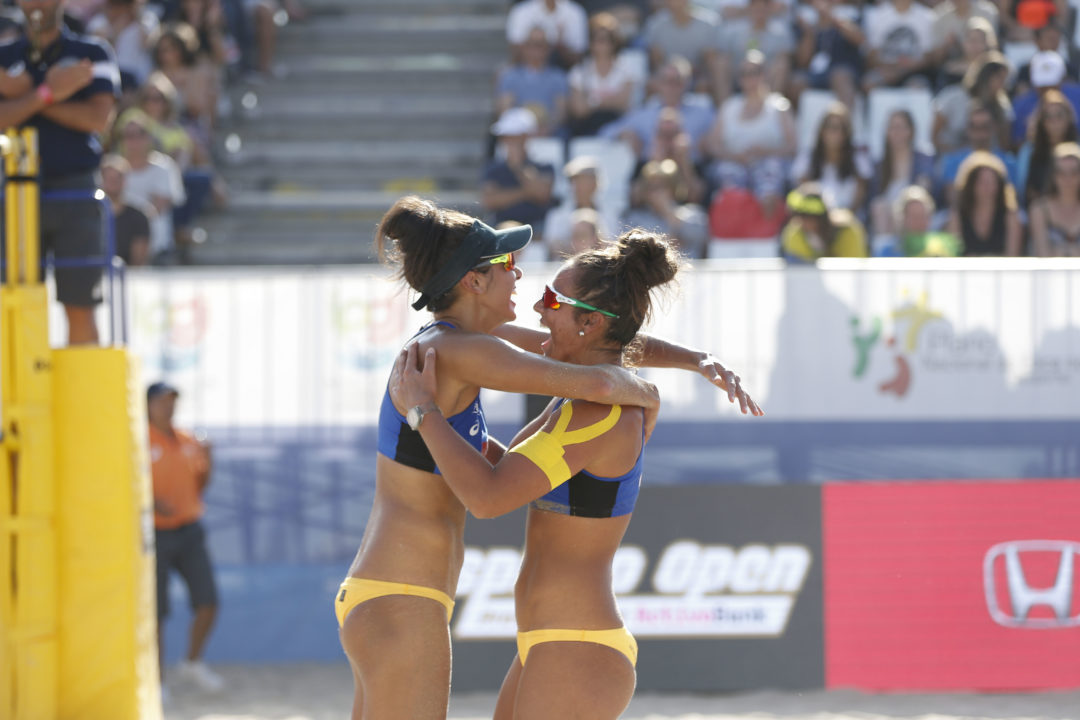 Saturday was all seemingly about the men at the Espinho Four Star as the field was whittled from 32 to four. Meanwhile, the women's podium was decided with the semifinal and medal matches.  Current Photo via FIVB

Saturday was all seemingly about the men at the Espinho Four Star as the field was whittled from 32 to four. Meanwhile, the women’s podium was decided with the semifinal and medal matches.

Left standing at the end of the day for the men were two Brazilian sides, one from Germany and one from Latvia. No. 19 Julius Thole/Clemens Wickler (Germany) will face No. 4 Janis Smedins/Aleksandrs Samoilovs (Latvia) in one semifinal. No. 2 Vitor Felipe/Evandro Goncalves Oliveira and No. 20 Ricardo Costa Santos/Gustavo ‘Guto’ Carvalhaes (Brazil) will battle for a spot in the final on the other side of the bracket.

All four American teams were ousted during the day’s matches.

Thole/Wickler continued success from Thursday’s qualifying rounds with three wins on Saturday. The pair took out Serbians Lazar Kolaric/Stefan Basta and top seeded Americans Phil Dalhausser/Nick Lucena in straight sets before pushing past No. 9 Anders Berntsen Mol/Christian Sandlie Sorum in tiebreak in the quarterfinals. The pair held on for the 21-18, 22-24, 15-13 win to move on to their first ever FIVB World Tour semifinals. The pair’s previous best finish was fifth place at the Ostrava Four Star on June 24.

“It was an incredible day today,” Thole said. “Tomorrow we have two more games and two more chances. We are really happy that in the last three weeks we have been able to compete with the best teams in the world and that it works so well.”

Ricardo/Guto also had a long road to the semifinals, beginning the tournament in the country quota matches on Wednesday. The duo swept past Americans Miles Evans/Bill Kolinske in Round 1 on Saturday, then followed with a tiebreak win over No. 5 Clemens Doppler/Alexander Horst of Austria (21-16, 17-21, 15-12). A straight set win over No. 14 Grant O’Gorman/Ben Saxton of Canada put them among the final four.

As two of Friday’s eight pool winners, Smedins/Samoilovs and Vitor Felipe/Evandro had just two matches on their Saturday slate after receiving a free pass to Round 2. Once there, the fourth seeded Latvians walked past No. 28 Murat Giginoglu/Volkan Gogtepe of Turkey and ousted countrymen Martin Plavins/Edgars Tocs, seeded 10th, both in straight sets.

The Brazilians stumbled in their opening set, but rallied with four in a row to wind up among the semifinalists. Mexico’s 16th seeded Juan Virgen/Lombardo Ontiveros issued the first challenge, topping the pair 21-18, but the Vitor Felipe/Evandro answered the call, closing out the win 21-16, 15-11. In the quarterfinals, the pair dusted off Qatar’s No. 22 Cherif Younousse/Ahmed Tijan in straight sets.

The gold was the first for Clancy/Artacho del Solar since winning the Lucerne Three Star on May 13 and marked the pair’s fourth podium finish in 2018, including a bronze at the Xiamen Four Star (April 22) and silver at the Commonwealth Games (April 12).

Maria Antonelli/Carol made the final and claimed their third silver of the year after besting Polish pair Kinga Kolosinska/Katarzyna Kociolek (21-10, 18-21, 15-12). The Brazilians also were runnerup at the Hague Four Star (Jan. 7) and in Huntington Beach (May 6).

Ross/Hughes rebounded from the semifinal loss to claim bronze with a tiebreak win over Kolosinska/Kociolek (17-21, 21-13, 15-11). The third place effort is the best for the new pairing, which finished fifth at the Xiamen Four Star (April 22) and in Huntington Beach (May 6). 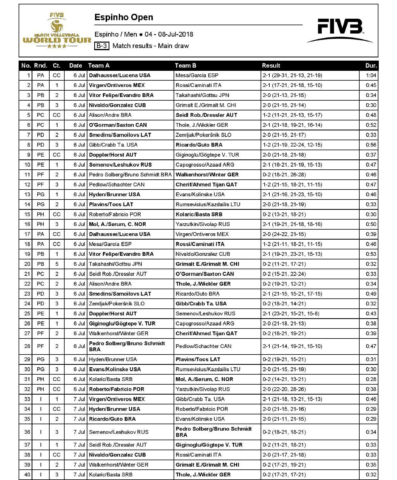