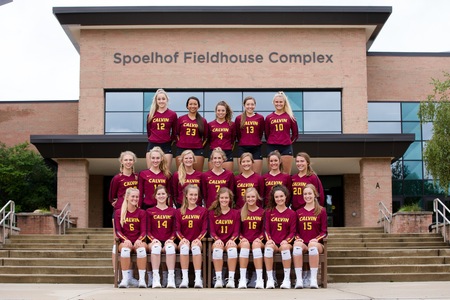 Just one week into the Division III season, defending champion Claremont-Mudd-Scripps was ousted from the top spot in the AVCA poll, opening the door for then-No. 2 Calvin College. Current Photo via Calvin College Athletics

Just one week into the Division III season, defending champion Claremont-Mudd-Scripps was ousted from the top spot in the AVCA poll.

CMS lost to Johnson & Wales in five sets in its season opener at the Pacific Coast Classic on Friday. The Athenas rebounded with three victories, but it was not enough to keep them atop the rankings. CMS fell to No. 4.

With the opening at the top, the Division III coaches merely shifted the next three teams up a spot, making Calvin (3-0) the new No. 1 followed by Colorado College (4-0) and Wittenberg (3-0)

The Calvin Knights went 3-0 at the Bomber Invitational, defeating Stevens and Ithaca in sweeps and Juniata in a five setter, to set up their shot at the No. 1 spot. The top ranking is the first for Calvin since being ranked No. 1 for three straight weeks in 2017 (Preseason, Week 1, Week 2), last on Sept. 12, 2017.  The Knights, which were listed third in the final 2017 poll, received 50 of a possible 72 first place votes on Wednesday.

The Tigers posted a 4-0 mark at their home Colorado College Classic, topping North Central College, Nebraska Wesleyan and East Texas Baptist in sweeps and the University of St. Thomas in four sets. The No. 2 ranking is the highest for Colorado College since being ranked No. 1 on Week 10 of the 2017 season (11/7/17). The Tigers finished fifth in the final 2017 poll.

11 teams mentioned on only one ballot for a total of 58 combined points.